Home > Moving Resources > The US States with the Most Survivalists

Kara Griffin
At Pro Mover Reviews, we’re always looking out for interesting data that might inspire Americans to pick up and move, which got us wondering: for those of us looking to find a place to settle to ride out the future, whatever it holds, where are the most survivalists located in the United States, and which are the best states to do so? To find out, we conducted a survey of over 2,000 Americans. 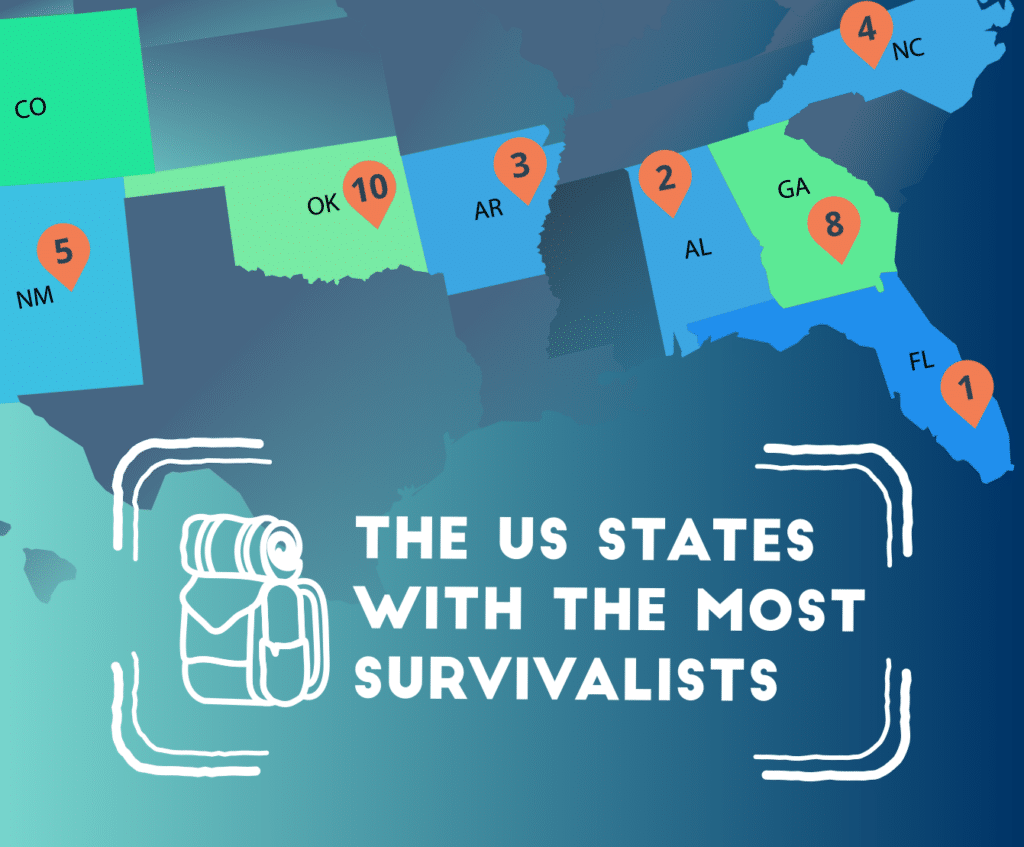 Climate and political disasters are not far from the minds of many Americans in 2022. But just how far do some Americans take it?

Plenty of us are familiar with the terms “doomsday prepper” or “survivalist,” defined as “those who proactively prepare for emergencies, including natural disasters, as well as disruptions to the social, political, or economic order.” For these groups, there is an emphasis on self-reliance, stockpiling resources and supplies, and gaining survival knowledge and skills.

Why Does Pro Mover Reviews Care?

At Pro Mover Reviews, we put a ton of effort into making sure that people looking to pack up and move are in good hands on their journey. Many people relocate for their careers, new opportunities, or just a change of scenery, but no matter the reason, the new location needs to suit you.

We’re not suggesting that you give up everything you know and become a survivalist anytime you relocate! But survivalists who have the future in mind often relocate to areas that are desirable for a number of reasons, like affordable land, low property taxes, and privacy, just to name a few.

Of course, these factors appeal to just about anyone, even if you’re not considering hunkering down and waiting out a climatic event or other disasters. Finding out where survivalists tend to congregate also means identifying some of the best places in the country to move.

Our first goal in finding out where survivalists tend to settle down was to — and potentially some of the best places to move — was to find out how many Americans identify themselves as “survivalists.” To do this, we surveyed 2,318 individuals, all of whom are US residents and over the age of 18. We surveyed all respondents between December 11th and December 15th of 2021.

Once we identified how many of these individuals categorized themselves as survivalists, we sorted responses by state to find the areas where the most and the fewest people would say they are survivalists.

We also included additional questions in our survey about survival tactics and practices to get a better sense of the percentage of residents in each state that is prepared in some way for a disaster.

Top US States with the Most Survivalists

One of our first questions on the survey provided to the 2,300+ respondents was whether or not they identified themselves as a “prepper” or survivalist. 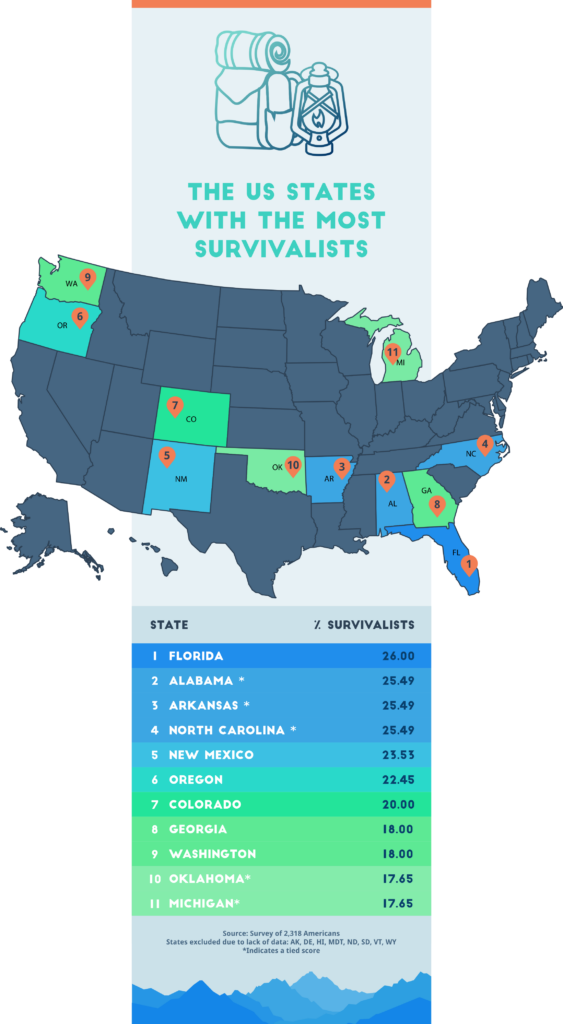 Florida came back as the state with the most survivalists, with an incredible 26% of all respondents identifying themselves as such. The level of perceived readiness for disaster in the Sunshine State likely has something to do with the fact that residents experience tropical storms, hurricanes, and other extreme weather that forces some level of preparedness.

There were only four states in which more than 25% of respondents answered that they considered themselves survivalists, three of which were tied for second:

Alabama is also prone to hurricanes and tropical storms, as is North Carolina, which likely factors into the preparedness in these states as well. Although situated inland, Arkansas is also prone to hurricanes, tropical storms that hit land, and ice storms. It’s also located in Tornado Alley and gets hit with tornadoes quite frequently, so residents are primed to be more prepared for disasters.

Also in the top ten were New Mexico, Oregon, Colorado, Georgia, and Washington, as well as Michigan and Oklahoma tied for tenth. All states in the top ten for survivalist populations scored above 17%.

It’s important to note that we had to leave out a number of states due to a lack of data. These include Alaska, Delaware, Hawaii, Montana, North Dakota, South Dakota, Vermont, and Wyoming. Some of these states — namely Alaska, where surviving and living off the land is a way of life in many areas — may have hit the top 10 states for survivalist populations if there was sufficient data.

Top US States with the Fewest Survivalists

Next, we looked through our survey responses sorted by state to find the areas in the country where the fewest survivalists congregate. 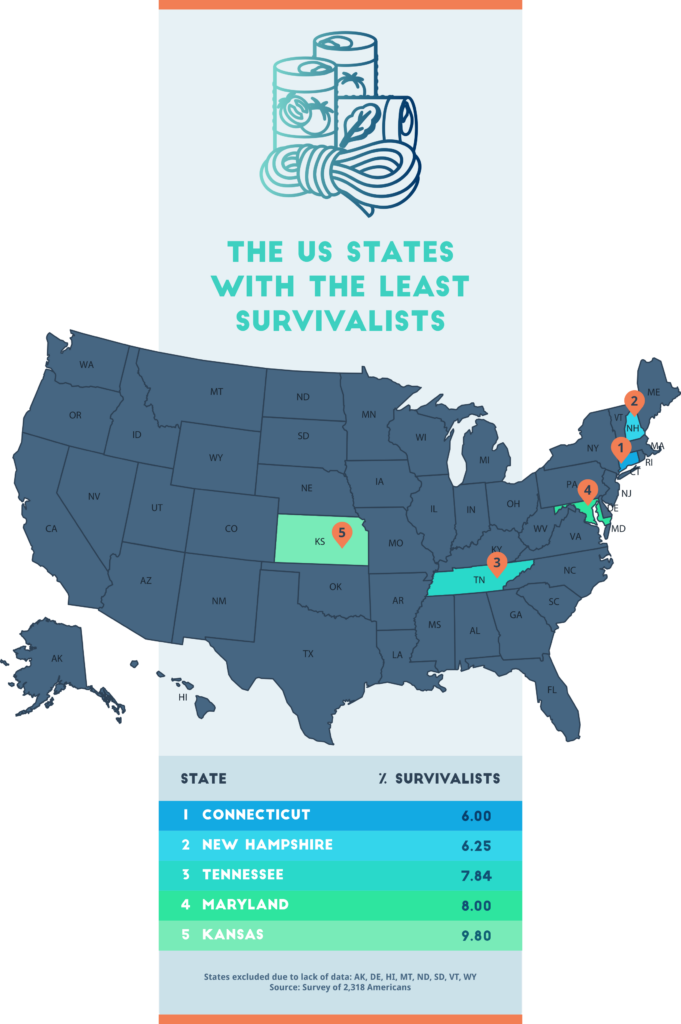 Connecticut came in as last place, with just 6% of respondents stating that they identify themselves as survivalists. There were five states total that came in under 10%:

Perhaps most interesting in this lineup of the “least prepared” states is New Hampshire, whose state motto, “Live Free or Die,” invokes the idea of being independent.

Again, we had to exclude several states from this ranking — Alaska, Delaware, Hawaii, Montana, North Dakota, South Dakota, Vermont, and Wyoming — due to a lack of data. It’s possible that any of these states would have landed among the least prepared states if more respondents were available.

Given the state of the country from a political and social perspective and the fact that we’re still in the midst of the COVID-19 pandemic, the Pro Mover Reviews team also wanted to get some insight into just how prepared Americans are overall. After analyzing the survey data, we included some additional questions about general preparedness and identified several interesting insights.

Next, we asked all respondents if they have purchased survival materials, which can include anything from non-perishable food items and bulk toiletries to generators and communication devices that don’t require an internet connection or subscription service. A total of 48% of all respondents stated that they expect to purchase more survival items in the future.

Our team was interested in how prepared Americans felt overall for a disaster of any kind, so we asked respondents and sorted responses by state. Overall, residents of Wisconsin, West Virginia, Washington, Virginia, and Utah feel most prepared for an unexpected environmental or political disaster.

Interestingly, only one state where residents feel most prepared for a disaster — Washington — made it into the top ten states for the number of residents identifying as “survivalists.” This could be due to a skewed perception of the term “survivalists,” especially in the wake of popular shows like National Geographic’s Doomsday Preppers, which glamorizes extreme survivalism.

Finally, it was hard to ignore the potential move to survivalism in the midst of the COVID-19 pandemic, so we asked respondents specifically if they have purchased more survival materials since the pandemic began. Quite unsurprisingly, 45% of respondents reported that they had.

Best States to Live to Survive Doomsday/End of the World

When it comes to life for true survivalists, there are a massive number of factors that go into deciding on the best place to live after an economic, political, or environmental disaster.

For most preppers, a low population density is essential so that the competition for natural resources is lower. Areas where wild game is in better supply are typically more favorable, so states with open land are generally better for preppers. Access to fresh water and fertile soil for farming is crucial, so areas with a low risk of drought are usually better. For all of these reasons, states with a mixture of forest cover and open land are more suitable.

Additionally, preppers often look for signs of potential growth of an area after the dust settles in the wake of a catastrophe. Factors that help identify that an area may flourish include low poverty and low crime rates, a high number of residents with higher education, an abundance of natural resources, and relatively high job growth rates.

With all that being said, preppers often identify five states in particular as the best for survival purposes in the wake of a disaster: Colorado, Idaho, Montana, Utah, and Washington State.

Of these states, only two appear on our list of states with the highest population of residents considering themselves survivalists: Colorado and Washington State. The likelihood is that these two states are the best places to relocate to if you’re prepping for the end of the world as we know it.

Why the Prepper States Are Desirable for Anyone

So, why does all of this matter if you’re not planning on buying into the “prepper lifestyle” and becoming entirely independent?

Well, most of the things survivalists look for also appeal to people who are simply moving. Relocating to areas that have open land and abundant natural resources tends to land you in beautiful locations. States with low population density and large properties offer privacy, which is desirable to most people, especially those relocating out of major cities.

States with a low risk of natural disasters offer more peace of mind to anyone moving. Packing up and moving to an area with low crime, low poverty rates, more residents with higher education, and high job growth potential is great for preppers, but it also appeals to just about anyone relocating, regardless of their motivation.

Considering these factors tend to land you in an area with high employment rates, high incomes, and potential for growth and opportunity. Add in affordable land, cheap utilities, and other general benefits, and you’ve identified areas that are as appealing to survivalists as they are to anyone else looking for a change of scenery.

After surveying over 2,300 individuals over 18 years of age and located in all 50 states across America, the Pro Mover Reviews team identified that residents in Florida, Alabama, Arkansas, North Carolina, and New Mexico have the highest density of residents who identify as survivalists. These states are all prone to some kind of extreme weather, including hurricanes and tornadoes, which likely accounts for some level of resident preparedness.

At the bottom of the list were Connecticut, New Hampshire, Tennessee, Maryland, and Kansas, all of which had less than 10% of residents identifying as preppers. The threat of natural disasters in these areas is generally less than in the most prepared states, which probably affects residents’ self-reported level of readiness for a catastrophe.

Perhaps most importantly for our readers, many of the states that are considered the best places to live for survivalists also appeal to people looking to relocate, whether the relocation is inspired by a move for a career, new opportunity, or just for a change of pace and scenery. Higher rates of education among residents, low crime and poverty, abundant land and natural resources, and a high potential for job growth make for an ideal place to live for preppers and non-preppers alike.

If you’re thinking of relocating, you can make your a whole lot easier by having a professional moving team behind you to help every step of the way. So, whether you’re heading to a survivalist state to prepare for the end of the world, or you’re simply looking for a more desirable place to live with more abundant opportunities, Pro Mover Reviews can help you get where you need to be.