Kara Griffin
Fincastle, Lovettsville, and Port Royal made up the fastest-growing cities in Virginia between the years 2010 and 2020 in terms of percentage population growth. This may come as a surprise to many lifelong residents of Old Dominion. Read on to learn more about some of the fastest-growing real estate markets in Virginia and why these areas are booming. 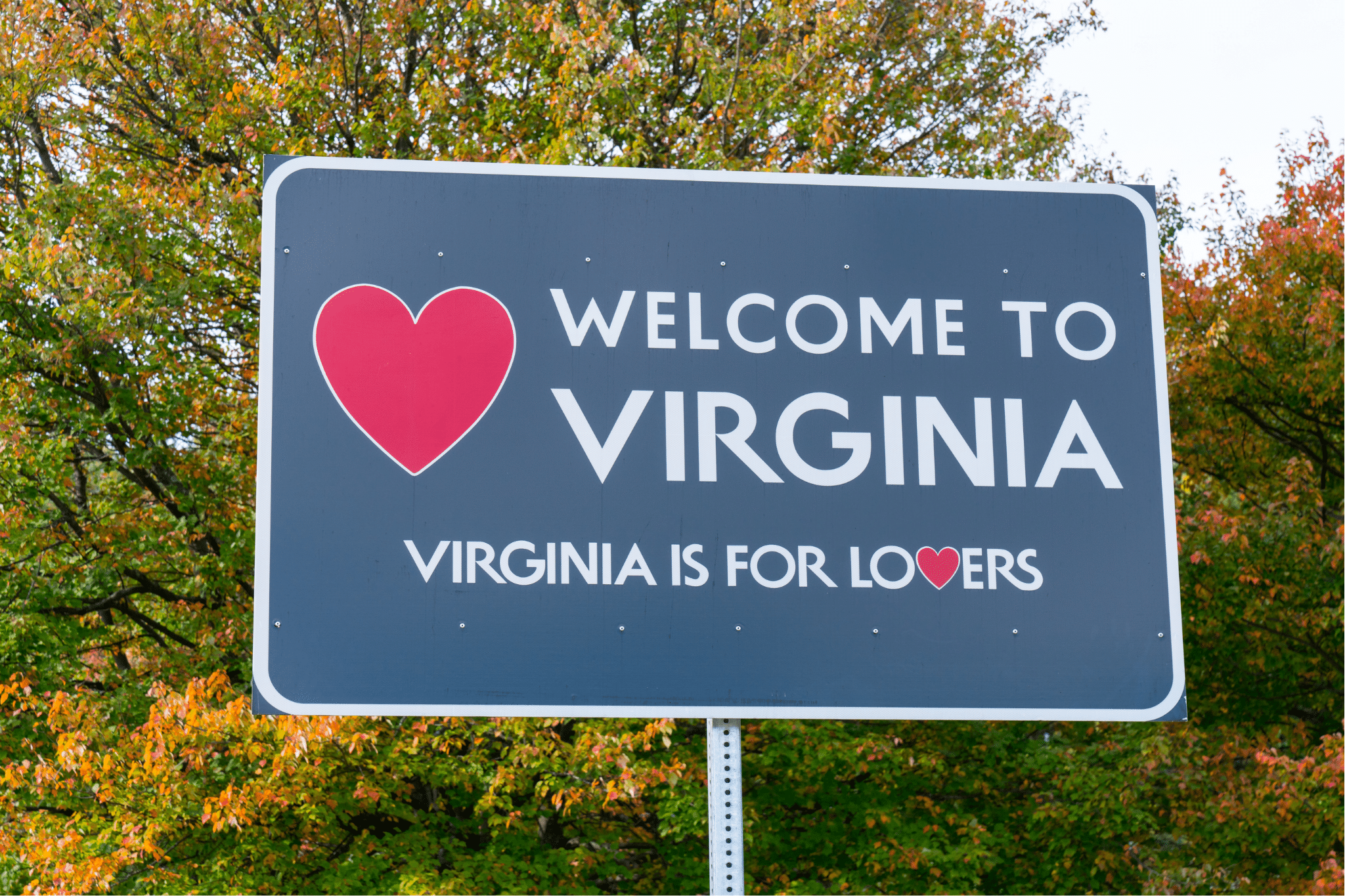 As the site of the first permanent state in America, Virginians are particularly proud of their heritage and the contributions that Old Dominion has made to the development and founding of the United States. With a direct connection to Washington D.C., Virginia continues to be a major hub for the running of our country. The state has also invested a large amount of money and talent into preserving its natural beauty and rich history, making the state just as popular with families as it is with history fanatics.

If you’re a lifelong resident of Virginia, you might be surprised to learn that many smaller cities in the state are seeing the highest levels of growth. For example, the area of Fincastle more than doubled its population in the last decade, while Lovettsville saw its population grow by half. What exactly are the most popular areas of Virginia where residents are moving—and why are these towns and cities making such a splash with property owners? Read on to learn more about the fastest-growing cities in Virginia. 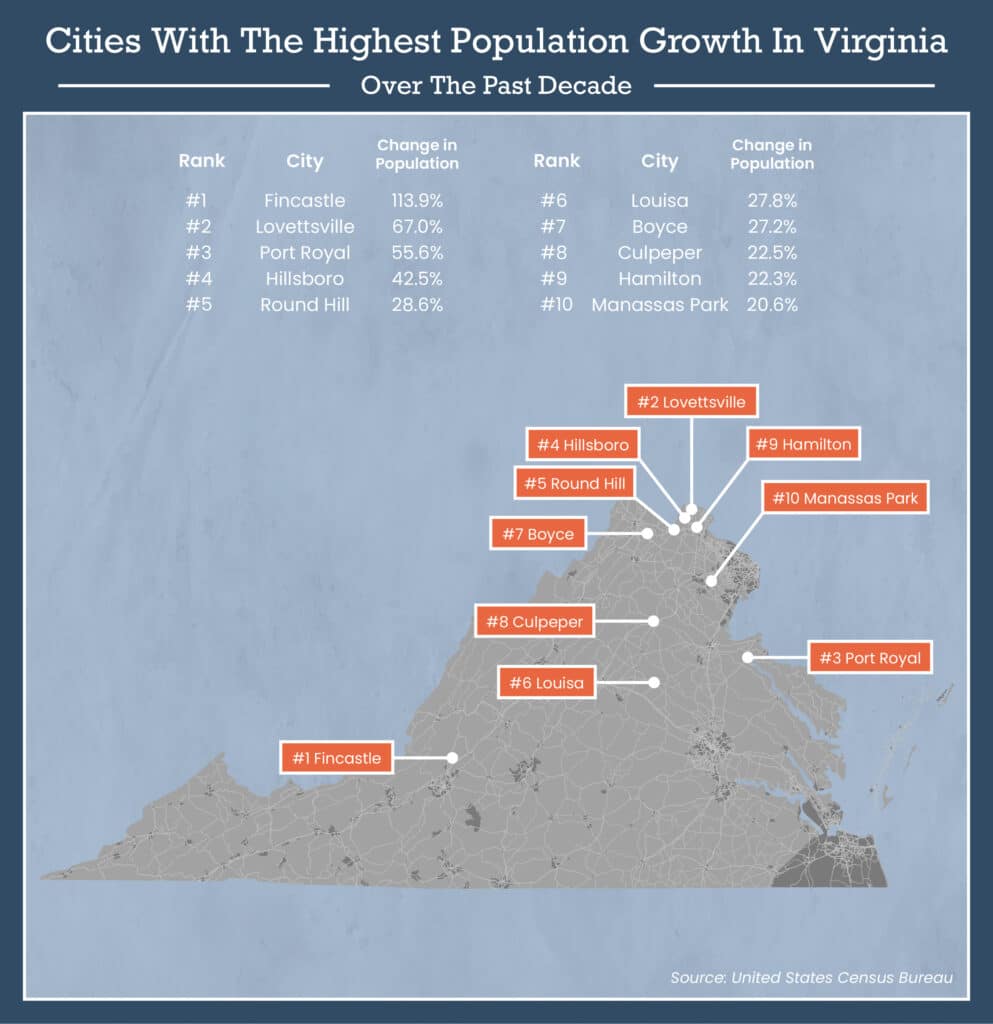 Fincastle is the seat of Botetourt County, Virginia. In 2010, its population was only 353 individuals, but by the 2020 census, that number had increased to 755 residents. Fincastle experienced a population growth of 113.9% during the most recent growth, making it the city in Virginia with the highest boom in population. In 2018, a new boundary line was drawn for the village as well. Its land area increased from only 0.2 square miles to 2.06 square miles in part to help its new influx of residents adjust.

For a relatively small place, Fincastle has a long history and as such, it has several notable places on the National Register of Historic Places. Some examples include a variety of historic manors, an old mill, and the Bowyer-Holladay House, which is a timber structure almost 200 years old. Fincastle is home to a Greek Revival-style courthouse built in 1850; however, it had to be rebuilt in 1970 after it sustained massive damages from a fire. This rich history and small, communal feel have drawn an increasingly dense population to the area.

Lovettsville’s population in 2010 was 1,613 residents. By 2020 it had risen to 2,694 men and women living in the area. This represents a growth rate of 67% over those ten years. Lovettsville was first established in 1722 as a settlement simply called “the German Settlement.” It was one of the few communities in Virginia’s Loudoun County to vote against secession during the Civil War. As such, it was a popular stopping point for Union soldiers to resupply.

There are plenty of festivals and events year-round in Lovettsville, such as Oktoberfest, a traditional German Christmas Market, and Mayfest, which is a Memorial Day weekend celebration. The per capita income for the town is around $33,000 per year, and none of its residents live below the poverty line. This gives the town a lively and fun feel year-round without the high costs of living that often come with city life.

Port Royal is located in Virginia’s Caroline County in the northeastern part of the state. Between 2010 and 2020, its population experienced a growth rate of 55.6%. The population grew from 126 people in 2010 to 196 people in 2020. This tiny village is one of the area’s oldest settlements, with the first settlers coming in 1652 to form a port along the Rappahannock River to promote trade, mostly within the tobacco-farming community.

Before 2014, Port Royal’s land area was only 0.10 square miles, but in that year, its land area was increased to 0.75 square miles. The village of Port Royal is only about 21 miles away from Fredericksburg, so if you choose to live in this village, jobs in the city aren’t far away. This can make the area an appealing choice for commuters who are looking for affordable real estate and more intimate community events without spending hours on the road on the way to work.

Hillsboro is best known as the third smallest town in the state of Virginia. Its population in 2010 was 80, and it rose by 2020 to 114 people. This marked a population growth of 42.5%. Hillsboro was originally settled in the 1700s by Quakers and other religious minorities looking to live and practice their religions freely. They established farms in the area and over the next two and a half centuries, the history of Hillsboro (then Hillsborough) unfolded.

In the summer of 2021, Hillsboro completed an infrastructure improvement program called ReThink9, which accomplished its goals of burying all overhead utility wires, building two roundabouts, adding a new safe drinking water system, and installing underground stormwater management systems and a wastewater management plant. There’s no better time to move to Hillsboro than now, especially because of its convenient location to larger urban centers such as Washington, D.C., and Harpers Ferry, West Virginia.

Round Hill is a small town in the top northern corner of Virginia’s Loudoun County. Between 2010 and 2020, Round Hill’s population grew 28.6%, from 539 inhabitants to 693. Round Hill got its name because of its proximity to a 910-foot hill used during the Civil War as a signal point for both the Confederate and Union armies.

Suburbs of Washington, D.C. have spread to the outskirts of Round Hill. As the capital itself is only 50 miles away, this is an ideal commuter town. Thousands of commuters to D.C. live right outside the town of Round Hill itself, so in the future, it can be expected that this small village will have another population boom. Round Hill is located at the foot of the lovely Blue Ridge Mountains and has access to the Appalachian Trail, the Virginia Bird & Wildlife Trail, and many sites on the National Historic Register. This can make the area a strong choice for D.C. commuters who also value access to the natural beauty of the state.

The town of Louisa was originally known as Louisa Court House. Its population in 2010 numbered 1,555, and it grew 27.8% by 2020. Louisa’s current population sits at 1,987 residents. According to the official town website, Louisa is located within the Fredericksburg, Richmond, and Charlottesville triangle, meaning that you’re never far away from the amenities those urban centers can offer.

Louisa houses the North Anna Nuclear Generating Station, which not only provides jobs for its residents but the warm water produced by the station is said to create the best fishing waters in central Virginia via Lake Anna. Cooper Vineyards in Louisa is the first winery on the East Coast and the second winery in the country to be awarded the platinum certification (the highest possible honor) by Leadership in Energy and Environmental Design, a green building certification organization.

Boyce is located in northern Virginia’s Clarke County. Between the censuses of 2010 and 2020, Boyce experienced a population growth of 27.2%, from 589 residents to 749. The town has a total land area of only 0.35 square miles. The per capita income of Boyce is around $17,000 per year, with about nine percent of the population living below the poverty line.

Boyce is only about nine miles away from Winchester, Virginia, a bustling city where commuters can work and then come home to Boyce at the end of the day. The town’s train station still stands, a reminder of the influence that the railroad has had on the town since its inception. It is the best-preserved railroad station in the area. Though the station is no longer in operation, Boyce remains a hub for commuters thanks to its convenient location.

Between 2010 and 2020, the city of Culpeper experienced a population growth of 22.5%. During the 2010 census, the population was 16,379, but within the next decade, it had increased to 20,062. Culpeper’s motto is “preserving the past, embracing the future,” and it does just that. With a vibrant arts scene, year-round festivals, gorgeous nature, and proximity to large metropolitan areas, Culpeper is a great place to call home.

The city is also home to a sports complex, plenty of cycling areas, mountain bike trails, and Shenandoah National Park, which is just 35 minutes outside of town. Along with all the beauty and excitement comes the information that the per capita income of Culpeper is only $16,800 per year. This means that real estate prices in this area tend to skew lower than other cities that offer these types of in-demand amenities.

Hamilton is another small village located in Loudoun County. Its population experienced a growth of 22.3% between the years 2010 and 2020. In 2010, the population was 506 individuals; by the end of the decade, Hamilton had become home to 619 residents. Hamilton has five sites listed on the National Register of Historic Places. It was first settled hundreds of years ago by Native American tribes, but it was first known as Hamilton Store and then Hamilton in 1835 after Charles Bennett Hamilton built a general store in town.

By the turn of the century, Hamilton had become Loudoun County’s second largest town, but about twenty years later, a fire destroyed much of the town and business and tourism declined. Now, almost a century after that 1926 fire, Hamilton is a residential community rather than a commercial or tourist center. However, the area is growing in popularity with homeowners looking for newer properties, as the town’s population has put a great deal of work towards restoring residential properties with modern amenities that may not be found in historic homes.

Bringing up the bottom of our list is Manassas Park, currently classified as an independent city. In 2010, the population of Manassas Park numbered 14,273 people, and by 2020 it had grown to 17,219. This marked a 20.6% rise in population over ten years. Interestingly, in 2021, U.S. News & World Report ranked Manassas Park as the town having the fifth highest life expectancy in the country, averaging 92.5 years.

All of the residents of Manassas Park live within just 2.5 square miles. With its proximity to Washington, D.C., Alexandria, and Arlington, it’s an ideal town to commute to these larger cities while enjoying suburban life. The town’s wealth of recreational activities available via its quick access to Hemlock Overlook Regional Park may play a role in the area’s active lifestyle and high life expectancy.

As you browse this list, you might be asking yourself—why are these areas, in particular, showing such outstanding growth? While population movements are the result of a wide variety of factors, some of the most common reasons why these towns and cities are growing include the following.

Are you planning a move to Virginia? If you are, you might be feeling stressed out about the prospect of planning and executing your household move all on your own. Working with one of the best moving companies in Virginia can make your move significantly simpler. From transporting all of your things with care to arranging packing and storage services, the best professional movers allow you to focus on what’s really important when relocating your family.