Kara Griffin
Cities like Fulshear, Iowa Colony, and Liberty Hill all doubled in population in the last decade. But which other cities in the Lone Star state are on the rise? Let’s take a look at the fastest growing cities in Texas that have shown the highest growth potential in the last decade—and what trends are driving these population changes. 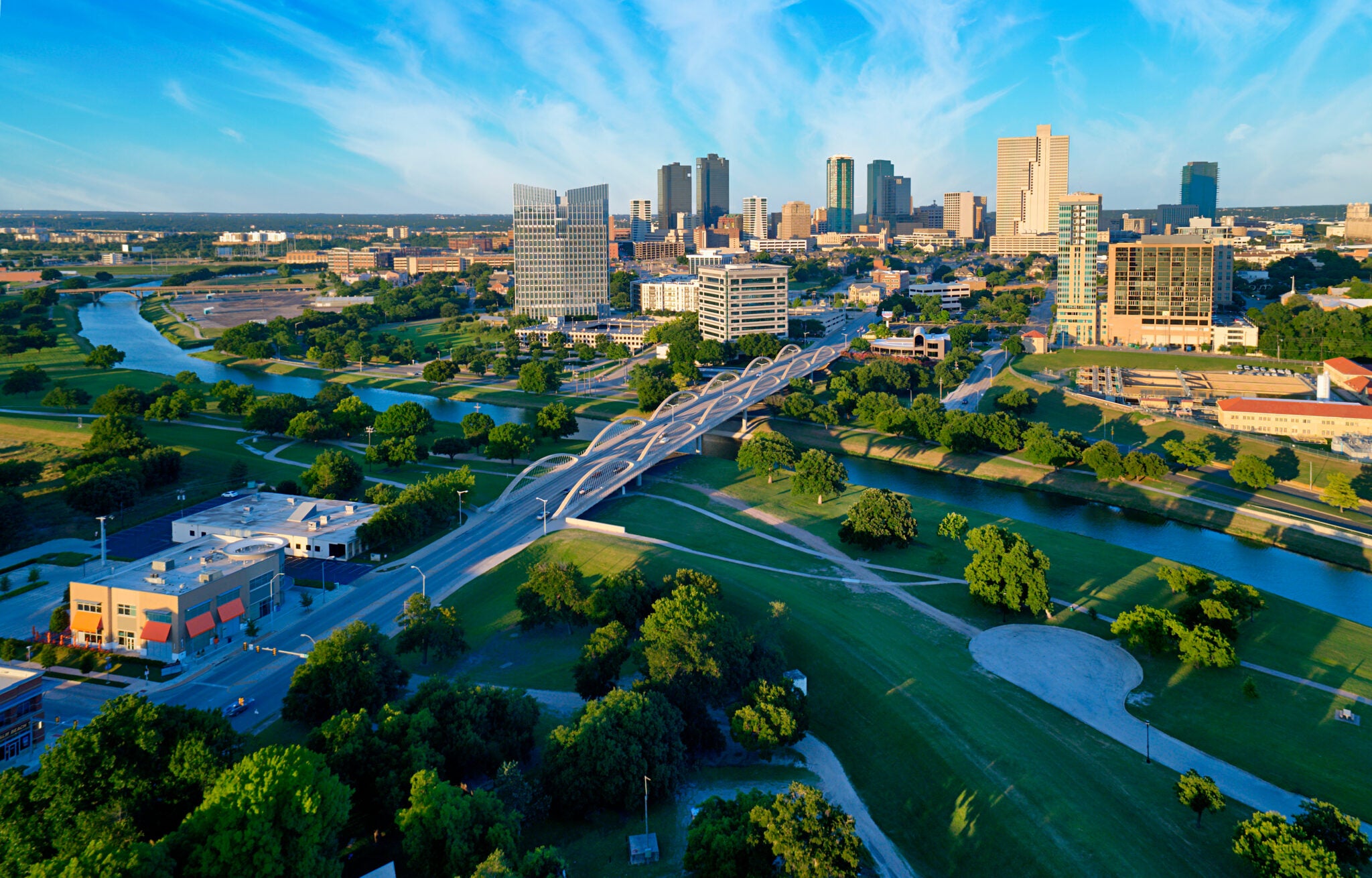 From ten-gallon hats to sweeping ranches, everything really is bigger in Texas—including population growth. While you might expect some of the largest cities, like Austin and San Antonio to be the fastest growing, some of Texas’s smaller cities have seen even more stunning population growth. The top 10 fastest growing cities in Texas in terms of population growth all doubled in size at a minimum, with many cities tripling in size in just 10 years. In this article, we’ll introduce you to a few of the hottest cities in Texas for relocation.

Yes, you read that number correctly—between the years of 2010 and 2020, Fulshear’s population exploded by more than 1,386%, growing from a relatively unknown area to a large suburb. In the last decade alone, the population of Fulshear grew from 1,134 in 2010 to 16,856 in 2020, with the population doubling in size multiple times over.

One of the driving factors behind Fulshear’s impressive growth is the installation of Cross Creek Ranch, a master-planned community that was established in 2008. Large swaths of available land and more affordable housing opportunities quickly dres residents from multiple states, especially those looking to expand their families. Today, more than 90% of Fulshear residents own their own home, and the city enjoys some of the highest-rated public schooling options in the state.

Like Fulshear, this massive boom in population is largely due to new and continuing suburban development in the region. The planned communities of Sterling Lakes and Meridiana plan to continue expanding affordable housing opportunities in the eastern and western portions of the city. If both communities are completely built out, Iowa Colony can expect another boom in population, potentially adding more than 19,000 new residents by 2060.

Nestled quietly in the Texas Hill Country, the rural town of Liberty Hill is surrounded by natural beauty and rolling hills—and residents of surrounding communities are taking notice of the city’s gorgeous views. From 2010 to 2020, Liberty Hill saw a growth in population from 967 to 3,646. This represents an overall population growth of 277%.

A suburb of the Houston, TX area, Liberty Hill has become one of the most desired suburban-rural areas to live in for those who work in the city. While the commute to Houston is easy and accessible, residents of Liberty Hill enjoy more affordable property values and direct access to a variety of parks and natural features. The city is also home to a thriving art scene, encapsulated in the annual Whimsy and Wonder Art Festival.

Characterized by hot, humid summers and mild winter seasons, Knollwood is another major Texan city that saw a boom in population from 2010 to 2020. In 2010, the area had only 226 residents. By 2020, this number had grown to 764, representing an overall population growth of 238.1%.

Located in the north of the Lone Star state, Knollwood’s population increase can largely be attributed to its low population density and affordable cost of living. In July of 2021, the median listed home price in Knollwood was $259,000, while the median listing price in Texas as a whole was $348,000. With easy access to the county seat of Sherman and more bang for your buck when it comes to housing, it’s easy to see why this city is experiencing exponential growth.

Billing itself as a “town where everyone matters,” Prosper is a farm-oriented community that showed a boom in population between the years 2010 and 2020. In 2010, the population of Prosper was just 9,423 residents. By the time 2020 arrived, Prosper had become the home of 30,174 Texas state residents, representing a population growth of 220.2%.

Though Prosper is located within the Dallas-Fort Worth area, it manages to maintain a small town, cozy feel, even in light of its sustained year-after-year population growth. Prosper maintains one of the lowest crime rates in the DFW area while also offering convenient access to more urban areas within the county. Prosper has seen particular growth among families, as the Prosper Independent School District is consistently recognized as one of the top-performing educational sectors in all of Texas.

The “Birthplace of the Texas Flag,” Montgomery is another one of the fastest-growing cities in Texas thanks to its location and wealth of natural beauty. Between the years 2010 and 2020, Montgomery’s population grew from 621 residents to 1,948 residents, representing a total population growth of 213.7%.

Montgomery has recently become a popular exodus for men and women who work in the Houston area thanks to its convenient situation. The city offers both easy access to the major highways that connect to the Houston area as well as Lake Conroe and the Sam Houston National Forest right outside of Montgomery residents’ doorsteps. For those who are looking for big-city amenities combined with plenty of opportunities for outdoor adventures, Montgomery can be an excellent choice.

Coming in seventh on our list of the 10 cities seeing the most population growth in Texas is Hackberry, a small suburb located in the Dallas area. From 2010 to 2020, Hackberry saw a population increase from 968 to 2,973, representing a 207.1% growth.

Offering a unique mix of suburban and rural living, Hackberry definitely has a different feel when compared to the glitzy city of Dallas located to the south. Residents of Hackberry prefer a smoother and slower lifestyle, and the city is consistently rated as a great place to raise a family thanks to its low crime rates and highly rated schools. Quick and easy access to Lewisville Lake also helps residents survive the Texas summers, offering a range of water activities and competitive sports.

Located about 10 miles southwest of Denton, Northlake is the eighth largest city in Texas when measured using population growth. In 2010, Northlake had a population of 1,724. By the time 2020 arrived, the city had grown to accommodate 5,201 men and women, representing total overall growth of 201.7%.

Situated near the famous Texas Motor Speedway, Northlake can be the ideal place to live for a racing enthusiast. However, the town offers many additional outdoor amenities beyond the racetrack. Northlake is also home to a wide variety of walking trails and golf courses as well, making it an excellent place to live for those who enjoy a slower-paced way of life.

Dating back to the mid 1850s, Melissa was previously known as a popular agricultural shipping point throughout the 1900s. However, today’s residents seeking employment and a lower cost of living in the Dallas area are flocking to Melissa. From 2010 to 2020, Melissa’s population grew from 4,695 to 13,901, representing a 196.1% growth rate.

Located close to McKinney and about 20 miles north of Dallas, residents who move to Melissa enjoy a largely new and expanding community. The average home in Melissa was built in 2015, and residents can take advantage of a lower cost of living and lower property taxes to finally buy the home of their dreams. This makes the city popular with families, who also enjoy a well-rated school system.

Texans who love outdoor sports and bathing in nature have been moving to Palmview in droves. The city is especially popular with birdwatchers, as Palmview offers quick access to the Bentsen-Rio Grande Valley State Park—one of the most popular birding destinations in Texas able to accommodate bilingual speakers. Those who enjoy more active outdoor activities prefer to spend their time at one of the city’s dozens of parks or to take a trip to the City of Mission Hike and Bike Trail Park, located south of Palmview.

Planning a Move in Texas?

If you’re looking for a great place to live and need a reliable mover, here are the best options in the state:

If asked to name some of the fastest growing cities in Texas, you might be tempted to assume that major metropolitan centers are continuing to grow. However, the truth is that many of Texas’s most populous cities saw only a small percentage of growth—and many had a negative growth rate between 2010 and 2020. For example, the city of Plainview saw its population decrease by 9.0%, while South Houston decreased in population by 4.9% over the last decade alone.

What is causing this change in population trends? Some factors that are influencing population movements to more rural pastures include:

The best moving companies in Texas know that even a move just a few towns over can be a major hassle. Hiring a professional moving company can make your trip stress-free by providing you with a faster move. Professional movers can also arrange third-party services (like packing assistance or storage) to make your moving process even simpler.

To find out the fastest growing cities in Texas by population growth, Pro Mover Reviews collected population data over the last decade (2010-2020) from the U.S. Census and calculated each city’s change in population.