Kara Griffin
Have you heard of the towns of Callimont, Connoquenessing, or Royalton? If you haven’t, you should get these areas on your radar, as they’re the fastest-growing areas in the Keystone State. But which other areas of Pennsylvania are seeing the highest population growth? Our guide to the cities with the highest population growth in Pennsylvania will help you learn more. 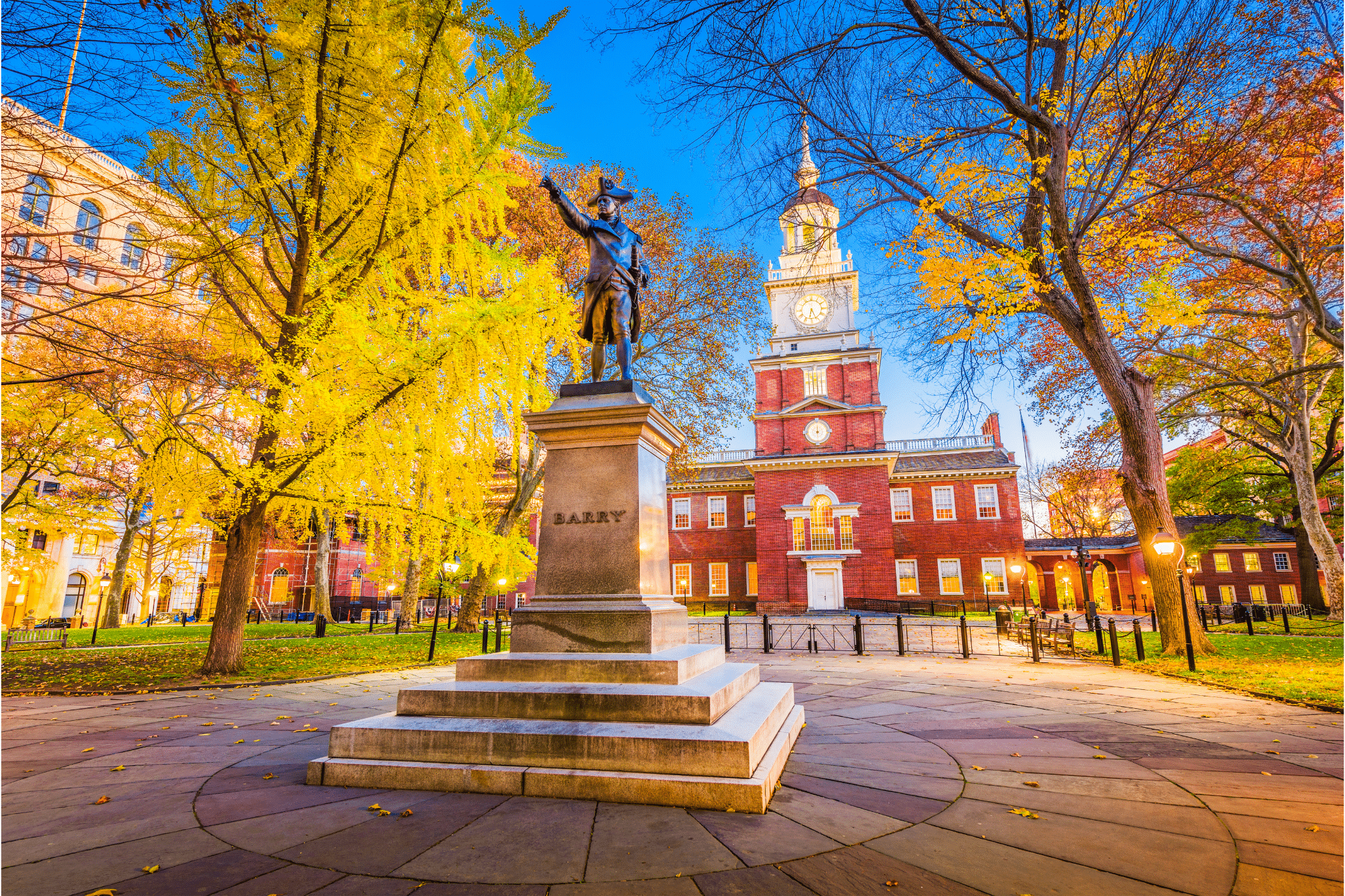 If you’ve ever made a visit to the state of Pennsylvania, you probably visited the bustling streets of Pittsburgh, enjoyed a dip in Lake Erie, or ate a cheesesteak in Philadelphia. While even residents born in Pennsylvania might assume that these major metropolitan areas are the fastest growing cities in the state, the truth is that smaller towns and villages are growing at significantly higher rates. Read on to learn a little more about some of the parts of the Keystone State that are seeing the most growth—and how real estate trends in Pennsylvania may continue in the future. 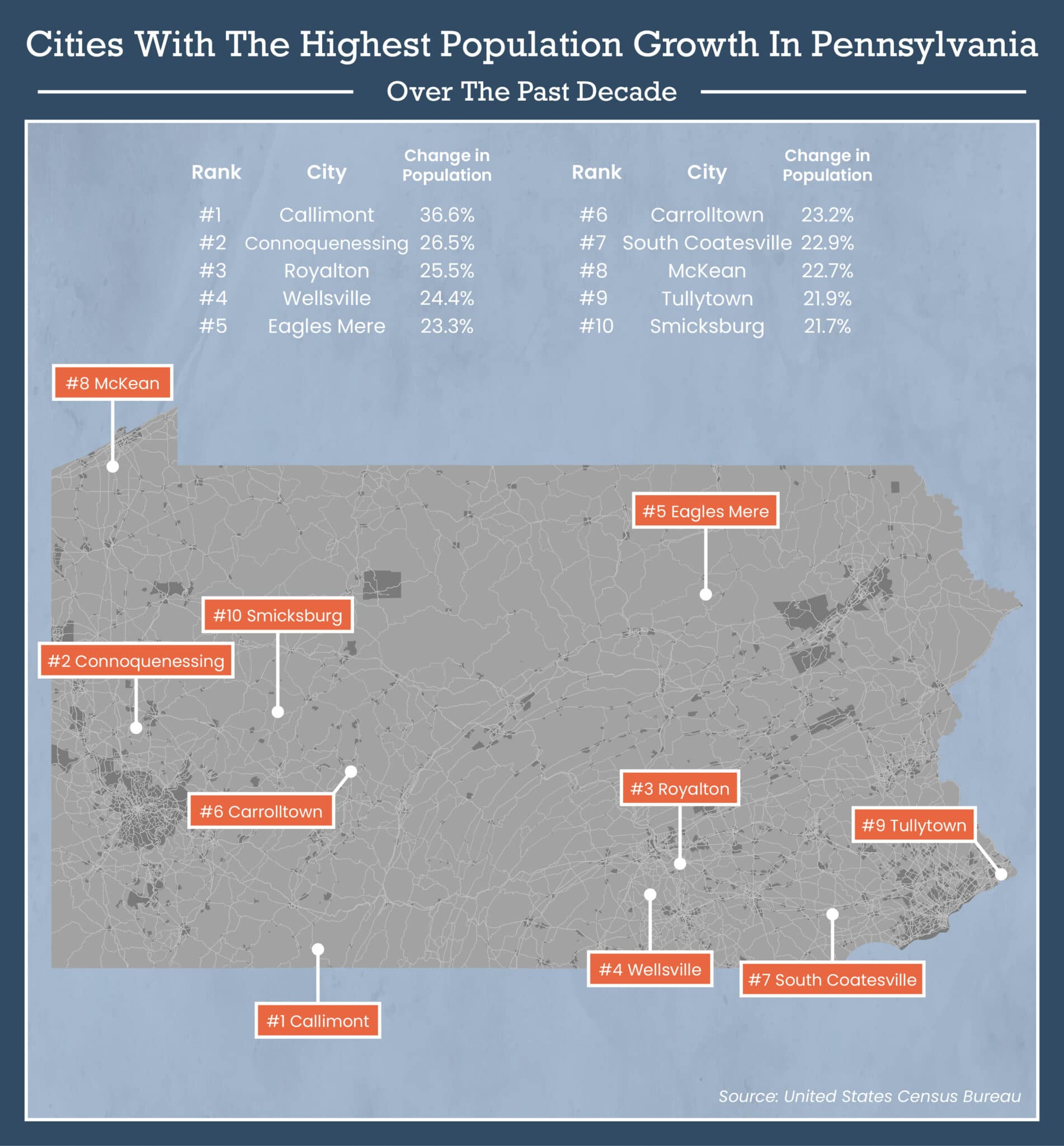 Callimont, Pennsylvania, has had quite the growth in population in the decade between the 2010 and 2020 census, but that’s mainly due to the population being small to begin with, at only 41 individuals. Now the small borough of Johnstown municipality has a population of 56. This area is about four and a half square miles.

There are only about 11 people per square mile, so the information regarding Callimont (employment, household statistics, etc.) is usually taken from the borough information as a whole. Callimont is located in Somerset County, which gained unfortunate notoriety as the location of the Flight 93 hijacking in conjunction with the September 11 terrorist attacks in 2001. However, Somerset County is home to historical sites and lovely state parks. It is one of the two snowiest inhabited locations in the US.

Connoquenessing grew from 528 inhabitants in 2010 to 668 in 2020, marking a population growth of 26.5%. This is a small borough of Butler County located on the west side of Pennsylvania. Connoquenessing is bordered by the Beaver River and Connoquenessing Creek.

A tributary of the Beaver River, Connoquenessing Creek is how the borough got its name, meaning “a long way straight.” Residents of this small borough are proud of their heritage and their long history, harking all the way back to the town’s foundation by Peter McKinney in 1792. The settlement which eventually became Connoquenessing enjoyed a huge oil boom during the nineteenth century, but it has since quietened down and become a tranquil forested community.

As of the 2010 census, 907 people lived in Royalton, Pennsylvania. Nowadays, the 2020 census established that the population has grown 25.5%, making the number of residents 1,138. Royalton is a borough in Dauphin County, which is near the southeastern corner of the state. Pennsylvania’s capital, Harrisburg, is eleven miles upriver (northwest).

Swatara Creek is Royalton’s northern border, and its name is said to come from a Native word meaning “where we feed on eels.” Until recently, residents of Royalton and surrounding areas fished bountiful harvests from the creek and the Susquehanna River. Throughout its history, Royalton has been flooded by these two bodies of water. Royalton has a long and colorful history and the residents enjoy its tranquility and small-town closeness.

Between the censuses of 2010 and 2020, Wellsville’s population has grown 24.4%, from 242 residents to 301. It’s modest growth for a period of ten years, but it’s steady and the town doesn’t tend to change much. Nearly the entire borough of Wellsville in York County, Pennsylvania, is on the National Register of Historic Places, meaning both that it has remained essentially the same for the past century and that it cannot be changed moving forward.

Wellsville enjoys beautiful brick sidewalks along with Greek and Gothic Revival architecture. Its nineteenth century churches and commercial buildings contribute to the illusion of being frozen in time. It has a total area of only 0.1 square miles, providing residents with an unmatched, intimate feel.

Eagles Mere is a borough in Pennsylvania’s Sullivan County, which is situated in the state’s upper right quadrant. The 2010 census recorded the borough’s population at 120 people—in the 2020 census, that number rose to 148 residents, meaning Eagles Mere’s population grew 23.3%.

Mere is an archaic and poetic name for “lake,” so Eagles Mere’s name literally translates to “the eagle’s lake.” The borough was founded in 1877 and developed into a resort town, complete with a water sports carnival, sled track, and hiking trails. There is a strong theater arts tradition in Eagles Mere even today, and it has about a dozen museums and attractions, including a toboggan slide. Despite its small size, Eagles Mere has no lack of options for food, fun, and relaxation.

Carrolltown’s 2010 population was 853 people. By 2020, it grew from 853 to 1,051, giving the borough’s population 23.2% growth. Carrolltown is located in Pennsylvania’s Cambria County, which is in the central part of the state.

Upon first glance, Carrolltown is verdant green town, with deciduous trees covering the borough and its buildings nestled within rolling hills. It has a land area of 0.69 square miles and has an organized and effective municipal governing system. Carrolltown is named for Bishop John Carroll, the first bishop and archbishop of the Roman Catholic Church in the United States.

South Coatesville is a borough of Pennsylvania’s Chester County and is located near the southwest tip of the state. The population at the 2010 census was 1,303, but by 2020 it grew to 1,601, giving South Coatesville 22.9% growth over those ten years. The borough has a land area of only 1.7 square miles, making the population density about 940 people per square mile.

South Coatesville has a library, fire department, and police department. The area is comparatively diverse, with a rich blend of multiple ethnicities and cultures living together in harmony. Chester County, wherein South Coatesville is located, is one of the three original Pennsylvania counties founded by William Penn back in the seventeenth century. South Coatesville, along with Chester County as a whole, is also prone to flooding from rainstorms. Because of this, they have an extensive storm drain system which empties potential floodwaters into nearby rivers and streams.

Back in 2010, the population of McKean was 388 people. McKean experienced a 22.7% growth in population over the next decade—in 2020, the population was at 476 residents. It’s part of Erie County, which is located in Pennsylvania’s northwestern corner. Elk Creek borders McKean and the creek flows into Lake Erie.

McKean is one of the younger boroughs on this list, being settled only a little over 200 years ago versus being populated by settlers in the 1600s. It used to be named Middleboro because of its location in the middle of Erie County, but in 1970, the name was changed to McKean after the Revolutionary War hero General Thomas McKean. McKean is also the namesake of McKean Township, showing how proud this town is of its contribution to one of the most notable periods in American history.

Tullytown, Pennsylvania, experienced a 21.9% growth in population from 2010 to 2020. In 2010, the borough had a population of 1,872; by 2020, it had risen to 2,282. Tullytown is located at the easternmost tip of Bucks County, which is at Pennsylvania’s southeast corner. It has an area of 2.1 square miles, which includes the water area occupied by Wickus Sippus Creek.

Only about 4% of the population of the borough lives below the poverty line; however, this comes out to an estimated 91 people. There is a building in Tullytown which was added to the National Register of Historic Places in 2007—the Walt Disney Elementary School. It was built in the mid fifties and Walt Disney himself attended its dedication, meaning that both the school and the town is overflowing with magical history.

Between the years 2010 and 2020, Smicksburg enjoyed a population growth of 21.7%, from 46 people to 56 people. Smicksburg is a borough of Pennsylvania’s Indiana County and is one of the smallest incorporated boroughs in the state. Its land area is only 0.1 square miles, and Smicksburg is in the middle of the left-hand third of Pennsylvania if it were cut into three vertical sections.

The Smicksburg Amish settlement is the third largest in Pennsylvania, with the larger concentrations of Amish being located in Lancaster County. There are several local shops where you can purchase locally made products such as pottery, wine, furniture, and knick-knacks, and you can also browse vintage items and antiques. Smicksburg is a welcoming place to the visitor or potential new resident who needs a rest from urban hustle and bustle and wants to embrace a simpler lifestyle.

Pennsylvania is truly a diverse state in terms of population and lifestyle. Nestled between two of the most historically significant cities in the northern United States are an endless number of smaller, more closely-knit communities. Why are more and more Pennsylvanians moving from the state’s most populous areas to smaller communities? Some of the biggest reasons why smaller communities are taking over in the Keystone State include the following.

No matter if you’re making the move to Philadelphia to further your educational career or you’re settling down in York to start a family, the moving process can be a stressful one. Working with one of the best long distance moving companies in Pennsylvania can make your trip less stressful. From helping you pack your things to minimize the possibility of damage to planning the perfect route for your move, professional moving companies ensure that the only thing you need to worry about when moving is yourself and your family.