Kara Griffin
Dering Harbor, Saltaire, and Sagaponack were the top three cities in terms of growth located in New York, showing massive increases in population between the years of 2010 and 2020. But which other cities are showing the highest amount of growth throughout New York? Our guide to the cities with the highest population growth in the Empire State will help you learn a little more about population trends in New York and beyond. 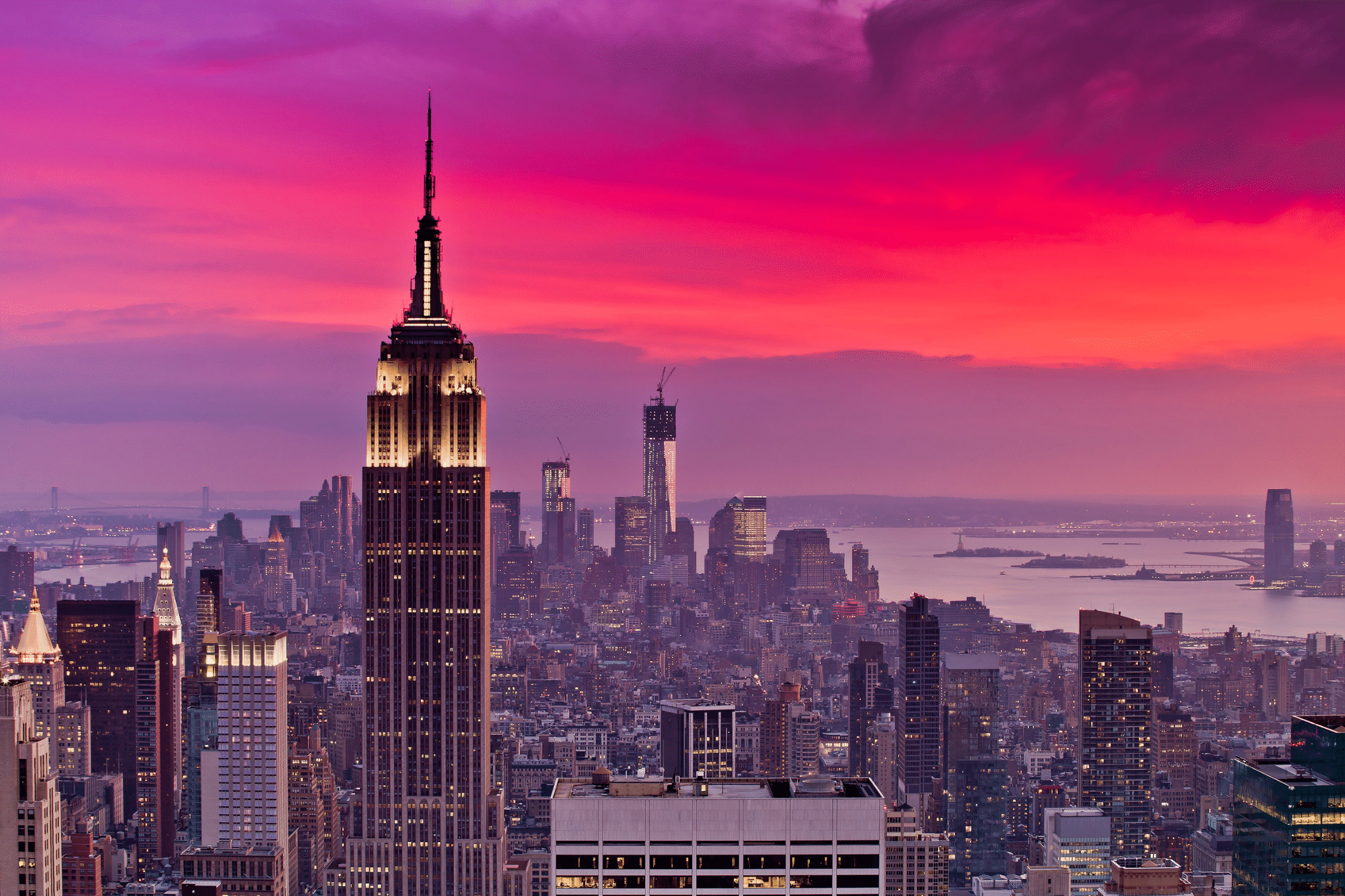 Though New York is best known as the location of the Big Apple, native residents know that the charms of the state extend far beyond Manhattan and Brooklyn. With a wealth of career opportunities, some of the most stunning small towns in the country, and a vast array of higher education choices, there’s little question why New York is so appealing for so many American residents—and why there are so many diverse real estate opportunities located across the state. Let’s take a look at a few of the fastest growing cities and towns in the Empire State to learn more about how population trends are changing. 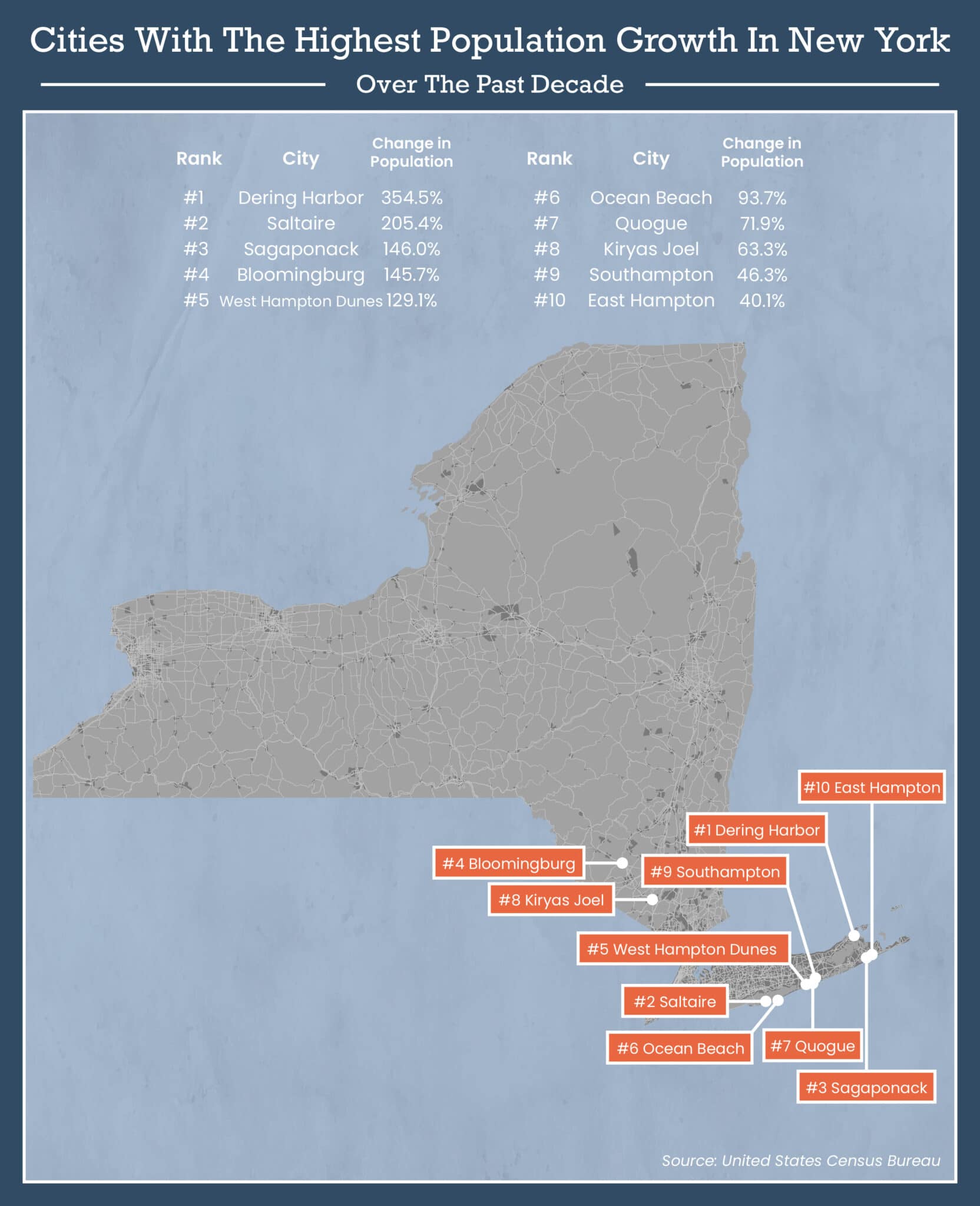 Dering Harbor certainly fits the definition of a village rather than a city. It’s part of the town of Shelter Island and has a history only about a century long. Between the years 2010 and 2020, Dering Harbor’s population grew 354.5%—from 11 people to 50 people. It is the least populous village in New York State.

The village of Dering Harbor began its life as a resort area, which explains why the real estate prices are in the millions. The village was incorporated as a section of Shelter Island in order to prevent the typical beachy attractions from taking root—boardwalks, short-term tourists, chain restaurants. Despite its tiny population even today, Dering Harbor has a comprehensive civil code and set of bylaws to maintain its preservation and standards.

The year-round population in Saltaire was typically 37 individuals, the population only drastically fluctuating during the summer months when families vacation there. However, the village has seen enormous growth of that constant population from 2010 to 2020 as it has risen as high as 113 people. Saltaire is located on Fire Island, which is an extremely narrow piece of land stretching between two similarly shaped islands south of Long Island, New York.

Despite Saltaire’s diminutive size, it has two churches, its own fire house, a village hall and court, and a yacht club for its members. It is an affluent community with lovely beaches and boardwalks, and cars are uncommon. Most residents and visitors alike get around the island using bicycles. If you’re looking for a place to settle down on the beach with a dreamy feel, you can relocate here and commute to Long Island for work.

Sagaponack is considered a village incorporated as part of the town of Southampton, New York. It is located on the eastern end of Long Island. The village of Sagaponack saw an incredible jump in population of 146% from the years 2010 to 2020, despite the fact that it is literally the most expensive neighborhood in the United States. The median housing price is more than four million dollars. Sagaponack has grown from 313 residents to 770.

This area was first settled back in 1653 and some of its first colonial residents were potato farmers. The name comes from the Shinnecock Nation’s word for “land of the big ground nuts.” Groundnuts are a vine which produce small potato-like edible tubers. Truman Capote, Drew Barrymore, Kurt Vonnegut, and many other notable people have called this village home.

Between the years 2010 and 2020, the population of Bloomingburg, New York, jumped from 420 to 1,032, giving the village a population growth rate of 145.7%. The area of the village is only about 0.3 square miles. For the past 100 years, the village’s main economic focus has been agriculture.

The biggest housing development project in Bloomingburg, Chestnut Ridge, began back in 2006, and it was proposed as an over-55 community including a golf course. Its true purpose was to create a subdivision for the Hasidic Jewish community. After it was sold to different developers, construction continued and the Hasidic Jewish residents of Bloomingburg have become part of the village’s life as much as any other demographic listed in the area.

In 2010, the village of West Hampton Dunes had a population of 55 people, but by 2020, that number increased to 126. Despite its small size, West Hampton Dunes has a board of trustees and its own police force. Most of the dwellings are located right alongside the sand and waves, creating a haven for sun worshippers.

West Hampton Dunes was actually part of the larger Fire Island until a nor’easter created Moriches Inlet in 1931, splitting the newly created Westhampton Island off from Fire Island. This area is a barrier island, which means that nor’easters have plagued West Hampton Dunes and its surrounding villages for centuries. In fact, the whole village was practically destroyed three times in the twentieth century, which is why the move to incorporate into the town of Southampton was decided on in 1993. West Hampton Dunes residents are proud of their village and their heritage and work to protect and restore the barrier island they call home.

Ocean Beach in New York has seen a 93.7% population increase from 2010 to 2020, growing from 79 people to 153. This village is incorporated into the town of Islip on Fire Island. Despite its 0.14 square mile area and its small permanent population, Ocean Beach is a popular tourist destination, with travelers coming from all over Long Island and New York State.

Visitors and residents alike can enjoy Ocean Beach’s beaches, bed & breakfasts, hotels, nightlife, souvenir shopping, and even an international film festival. There is no lack of activity within this resilient and charming village. Interestingly, there are no cars allowed in the village during the summer months, so this is paradise for pedestrians and cyclists.

One of the larger villages on our list, Quogue is incorporated within the town of Southampton and located on Long Island. It has seen a 71.9% increase in population from 2010 to 2020, with its residents increasing from 967 to 1,662. The village of Quogue has an area of five square miles, with most of that area being land and 0.77% of it being water.

Although Quogue was settled in the mid-1600s, it grew in size and reputation during the 1890s as a beach resort town for summer visitors. Where other places in New York’s “Hamptons” are noted for being residences of the wealthy elite, Quogue prides itself on being a family-friendly community, always looking to develop and expand at its own pace.

The village of Kiryas Joel in New York’s Orange County has seen 63.3% growth between the years 2010 and 2020. The population during the 2010 census was 20,175 and has grown to 32,954. The main reason for this population growth is that almost the entire village population is made up of Hasidic Jews, who tend to have large families. According to the 2008 census numbers, Kiryas Joel has the highest poverty rate in the entire country. Forty percent of the village receives food stamps and most of the residents are living at or below the federally determined poverty line.

Most residents of Kiryas Joel use public transportation, especially to travel to and from the Williamsburg and Borough Park areas of Brooklyn in New York City, which are also home to large Hasidic communities. Despite the high poverty rate, Kiryas Joel has virtually no reported crime to speak of. The sign welcoming visitors to the community requests that conservative clothing be worn, and gender separation must be maintained in public places in accordance with Hasidic custom.

The village of Southampton is regarded as one of the two most prestigious of the group of communities on and around Long Island known as the “Hamptons.” This village has the area’s only hospital and is home to half of the billionaires residing in the Hamptons. Though Southampton was settled close to four centuries ago and continued in the vein of an agricultural hub, Southampton is recognized in the present day as a summer beach resort for the wealthy American elite, once hosting members of the Eisenhower, Du Pont, Ford, Morgan, and Woolworth families, to share a few familiar names.

East Hampton is the other hugely prestigious member of the “Hamptons.” It has enjoyed a 40.1% rise in population between 2010 and 2020, with the number rising from 1,083 to 1,517. It began in the mid-1600s as a fishing and whaling village, with residents harvesting beached whales for meat, blubber, and precious whale oil.

East Hampton today is a far cry from where it began centuries ago. It is a resort village with gorgeous white sand beaches only 100 miles outside of New York City. Because there are strict zoning laws along the beaches, the only buildings along the coast are residential, which makes East Hampton the holder of the most desirable beach spots in the area. Be aware that residents of East Hampton can always get parking permits to visit the beaches, but between May and September, the permits cost $250 for visitors and there are a limited number. However, you can always bike or walk to the beach without a permit.

If you’ve never lived in New York before, you might be surprised to see that some of the most famous cities in the state (including New York City and Albany) didn’t make our list of the fastest-growing residential areas. In fact, 50% of the fastest-growing areas between the years of 2010 and 2020 had fewer than 1,000 residents.

What is causing this shift in population to smaller parts of the state? Some of the factors that are playing major roles in the exodus from urban areas to quieter pastures may include the following.

No matter if you’re moving to the big city or you’re making your way to one of New York’s more scenic areas, working with one of the best long distance moving companies in New York can make your journey easier. Be sure to begin your search for the right moving company by getting a few quotes from competing providers. Taking your time and doing your research is the best way to ensure that you’re working with a moving team that truly understands your budget and your individual needs.