Kara Griffin
Lifelong residents of New Jersey may be surprised by the fastest growing cities in the Garden State. Tavistock, Pine Valley, and Harrison all took top spots in our list of the cities with the largest population growth rate in the state. Read on to learn more about some of the fastest-growing real estate markets in New Jersey. 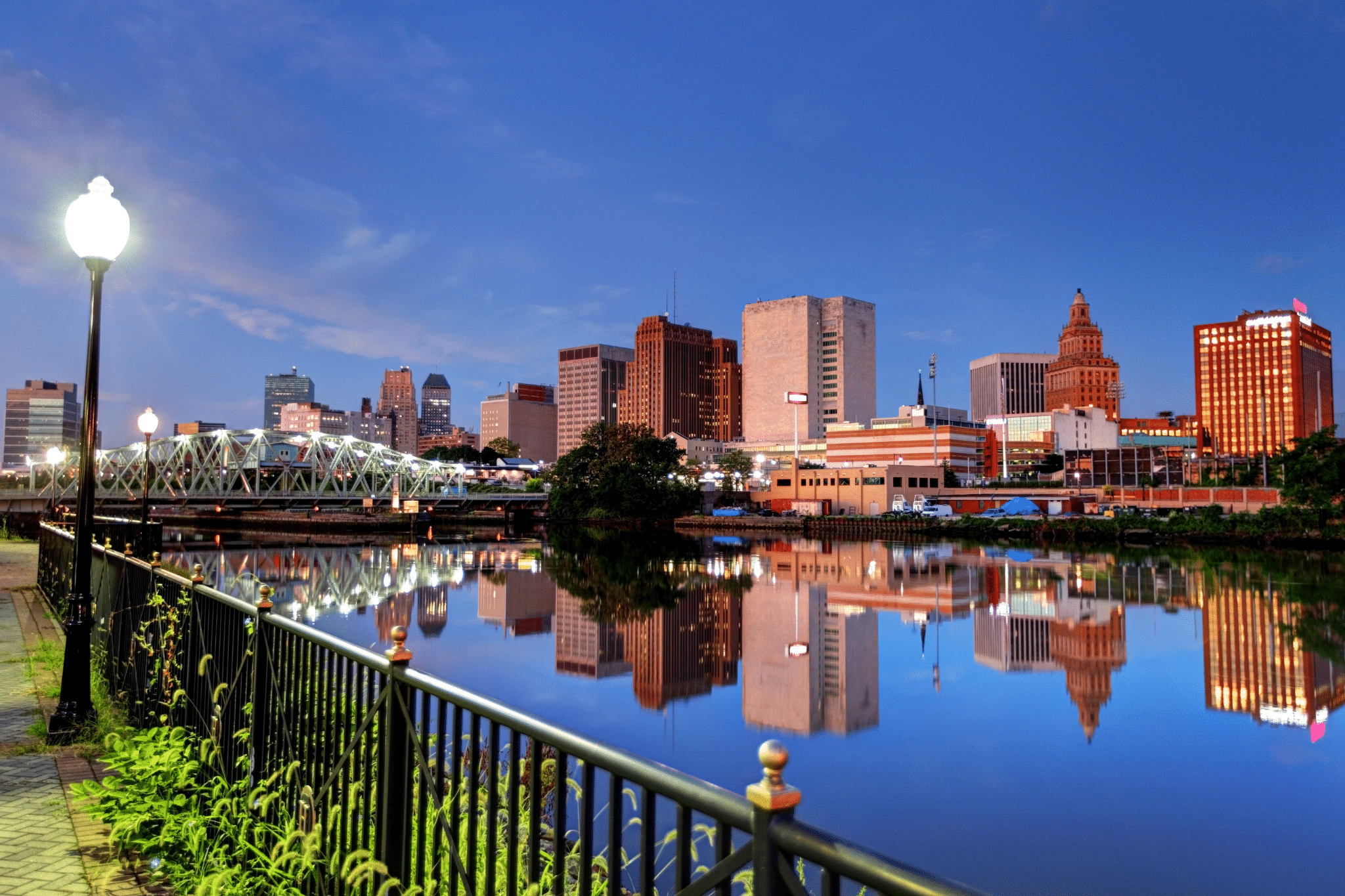 When considering all of the states in the country, there’s no way to deny that New Jersey is one of the most geographically fortunate. With a mild climate, a range of gorgeous beaches, and a thriving agricultural economy, there are plenty of things to love about the Garden State. All 21 counties in the state are classified as metropolitan areas, which means that Jersey also has its own share of arts, culture, and diversity. However, as population trends change, some residents are moving out of New Jersey’s most populated cities and shifting their attention to lesser-known areas.

Even if you’re a lifelong resident, you might be surprised at how population trends are flowing. Read on to learn more about the hottest areas in New Jersey for relocation. 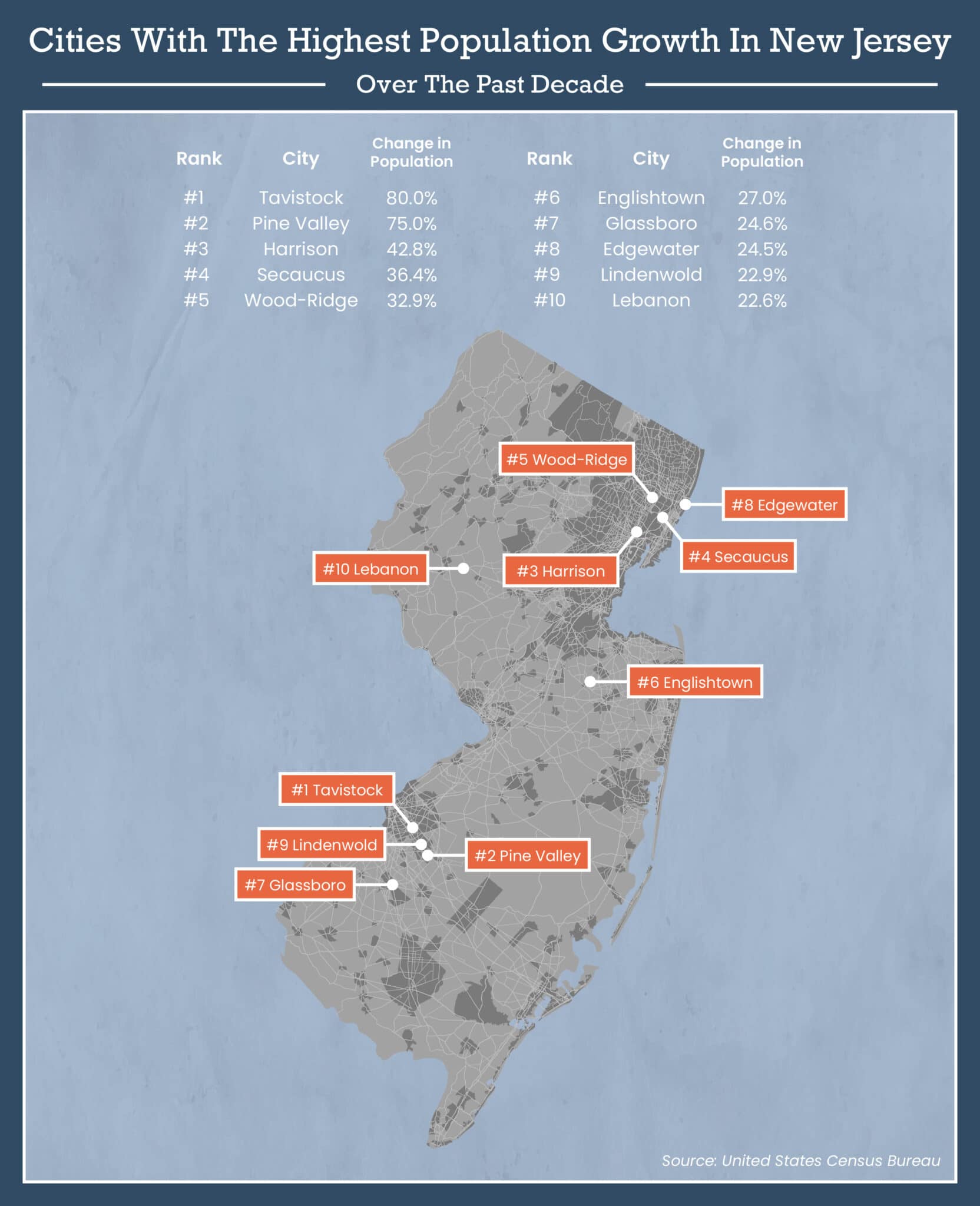 The first town on our list of the fastest growing areas of New Jersey is also the smallest. Between the years of 2010 and 2020, Tavistock’s population grew from five to nine residents—meaning that the area nearly doubled in size.

The second city with the highest growth rate in New Jersey is another small-town name, Pine Valley. Between the years of 2010 and 2020, the population of Pine Valley increased from 12 residents to 21 residents, representing a total population growth of 75%.

Like Tavistock, the most notable feature you’ll find in Pine Valley is the famed Pine Valley Golf Club. The Pine Valley Golf Club is hailed by golfers from around the world for its challenging architecture. Course architect Robert Trent Jones once wrote that Pine Valley “is frequently alluded to as the most difficult course in the world,” drawing players to test their skill on this course. Pine Valley has even been awarded the number one spot in Golf Digest’s 2021-2022 America’s 100 Greatest Golf Courses listing. As the golf course continues to gain notoriety, more staff members are needed to mitigate customer demand—likely leading to the growth in population we see today.

Located on the western bank of the Hudson River, Harrison has become particularly popular with commuters looking to escape the more crowded city of Newark. Harrison offers direct access to the New Jersey Newark Turnpike, which means that residents can be in the heart of Newark in less than 10 minutes by car. Harrison also offers a range of parks and is located near the Richard W. DeKorte Park, making it a popular choice for families who need to commute to the city for work but who also want to enjoy the benefits of living outside of a major urban center.

The fourth fastest growing city in New Jersey is one that both local residents and travelers are likely to recognize—Secaucus. Between the years of 2010 and 2020, Secaucus’s population grew from 16,264 residents to 22,181 residents. This represents a total growth rate of 36.4%.

Located within the New Jersey Meadowlands, Secaucus is one of the most suburban of all the municipalities in the Garden State. However, this doesn’t mean that the area is limited in its employment opportunities—large sectors of the city are devoted to light manufacturing and retail, which can provide opportunities for working professionals. Large areas of Secaucus are also dedicated to natural preservation and transportation, making the city both exceptionally accessible for residents who do not own a car and attractive to nature lovers alike.

Wood-Ridge is another New Jersey city that has seen exceptional growth between the years of 2010 and 2020. In the last decade, 2,511 residents moved to Wood-Ridge permanently, bringing the population from 7,626 to 10,137. This represents a growth rate of 32.9%.

Located in Bergen County, Wood-Ridge is home to a number of working professionals. The primary draw of this area is its quick connection to New York City thanks to New York’s impressive bus and subway system. Residents of Wood-Ridge can be in the heart of Manhattan for as little as $3 when taking the public bus system, which allows commuters working in the City That Never Sleeps to enjoy a quieter lifestyle and more affordable housing prices while also having direct access to New York City. This transportation access likely contributes to Wood-Ridge’s higher-than-average annual household income.

Between the years of 2010 and 2020, Englishtown’s population expanded from 1,847 residents to 2,346 residents. This represents a 27% increase in population within the town in the last decade alone.

Englishtown is a particularly popular destination for families living in New Jersey who are looking for a combination of great education opportunities for their children and a less urban setting. Children and teenagers living in Englishtown are educated within the Manalapan school district, which consistently ranks highly based on both parent reviews and national test scores. Located in the center of New Jersey, Englishtown provides convenient access to the amenities available in the rest of the state with just a short drive while also maintaining a dense suburban feel that parents love.

Glassboro is the seventh city in New Jersey with the fastest growing population, having added 4,570 new residents in the last decade. Between the years of 2010 and 2020, Glassboro’s population rose from 18,579 to 23,149, representing a total population growth of 24.6%.

True to its name, Glassboro was built on the manufacturing of glass, having been founded in 1779. Today, the town is overflowing with rich history as well as educational attractions that families love. Residents can purchase a restored historical home, which is a popular draw to the city of Glassboro because these homes retain their colonial feel while also providing access to more sturdy construction and modern conveniences. In their free time, residents of Glassboro can visit the Heritage Glass Museum or the Glassboro Historic Train Station for a touch of culture. Glassboro also provides direct access to the Glassboro Wildlife Management Area—a haven for nature lovers.

Located directly on the Hudson River, Edgewater is true to its name. The city of Edgewater is also located exceptionally close to the border between New Jersey and New York, which makes commuting into the city a breeze. This has led many working professionals to flee to Edgewater to avoid paying New York City’s higher property and employment taxes while also being able to effortlessly commute to their Manhattan offices.

The ninth city with the fastest growing population in New Jersey is Lindenwold. Between the years of 2010 and 2020, Lindenwold’s population grew from 17,613 to 21,641 residents. This represents a total population growth rate of 22.9%.

Like many areas of New Jersey that are showing high population growth, Lindenwold’s primary draw is likely commuters. The city affords easy access to both Philadelphia, Camden, and Cherry Hill while also maintaining its affordability. The average price of a home in Lindenwold is $124,200, which is significantly lower than the national average value of $217,500. Residents of Lindenwold can be in the heart of Philadelphia in just 30 minutes by bus, which costs about $5 for a one-way ticket. This convenience combined with a lower cost of living is likely driving the increase in population, particularly among young career professionals.

A truly rural community, Lebanon offers all of the benefits that come with living away from a major city. The cost of living in Lebanon is exceptionally lower than most other parts of New Jersey, which can be a major draw for residents living on a limited income and younger men and women who are still in the early stages of developing their careers. Despite the fact that median home values in Lebanon are about $100,000 higher than the national average, about 94% of residents own their own home as opposed to renting. Lebanon also offers quick commutes to some of New Jersey’s largest urban centers, including Edison and New Brunswick.

If you’ve lived in the Garden State for years and you were asked to guess what the fastest growing areas of the state are, you would probably name major cities like Camden, Ocean City, or Atlantic City. However, you’d be incorrect—all of these cities actually showed a decrease in population within the last decade. In particular, Camden saw its population drop by a whopping 7.2% in the last ten years alone.

What is causing this shift in population trends? Some of the reasons why New Jersey’s smaller communities are seeing increased growth include the following.

Are you thinking about making a move to New Jersey? Don’t take on this challenging task alone—consider working with one of the best long distance moving companies in New Jersey when you move. From packing up all of your things to arranging storage unit use on your behalf, the right moving company can make your journey significantly faster and less stressful for you and your family.