Kara Griffin
Mesquite City, Henderson, and North Las Vegas are three of the fastest-growing cities in the state of Nevada, which might surprise you if you’re a lifelong resident of the Silver State. Learn more about Nevada’s hottest real estate areas with our market guide. 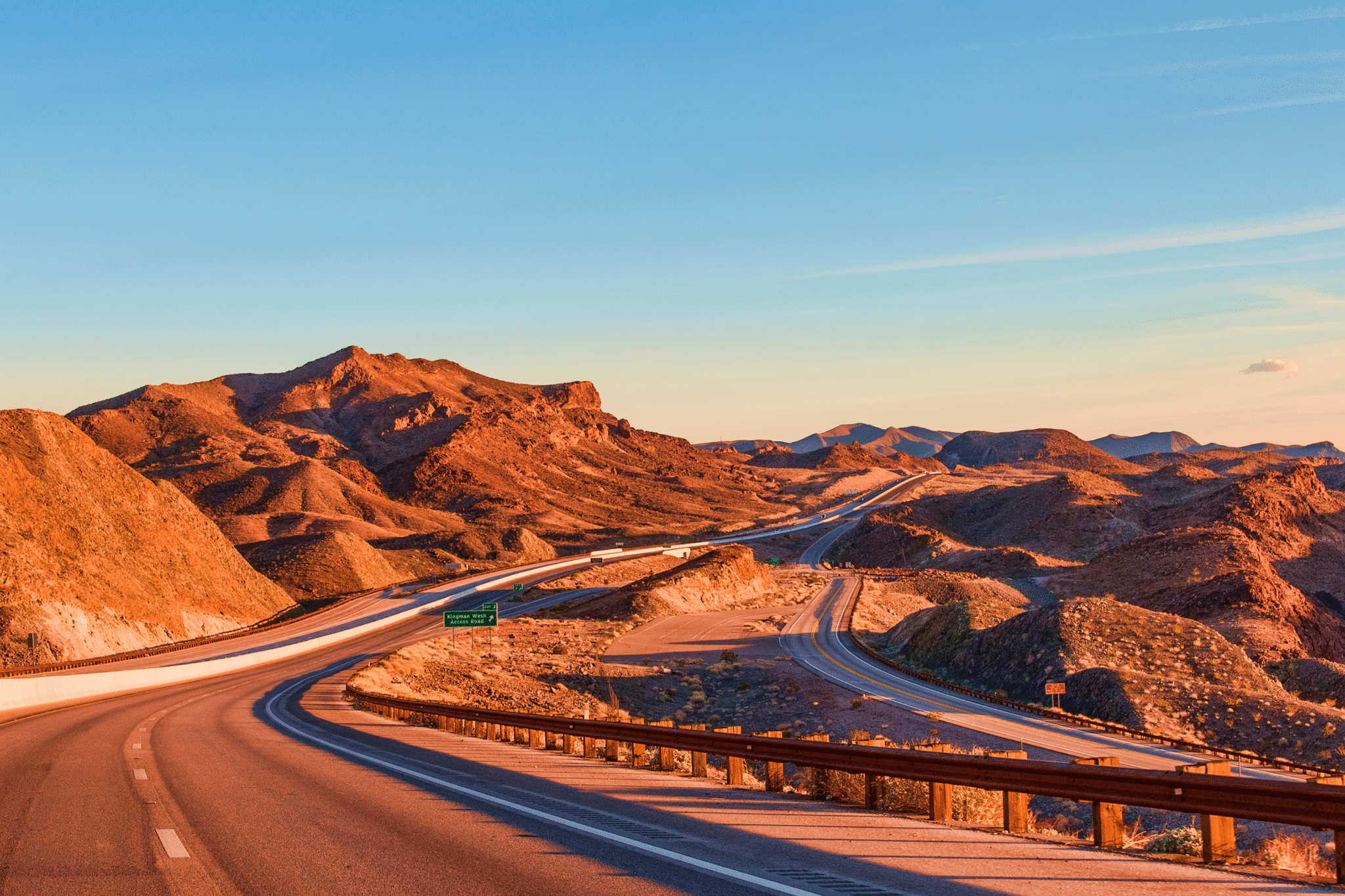 To outsiders, Nevada is largely defined by the bright lights and high rollers of the “Entertainment Capital of the World,” Las Vegas. However, residents of Nevada know that the Silver State is much more than poker tables and slot machines. Overflowing with sunshine and natural beauty, Nevada is just as much fun for entertainment as it is for outdoor and recreational activities. However, the fastest-growing cities in Nevada might shock even those who were born and raised in the state. Let’s take a look at the towns and cities in Nevada that are showing the most growth—and why they’re attracting new residents. 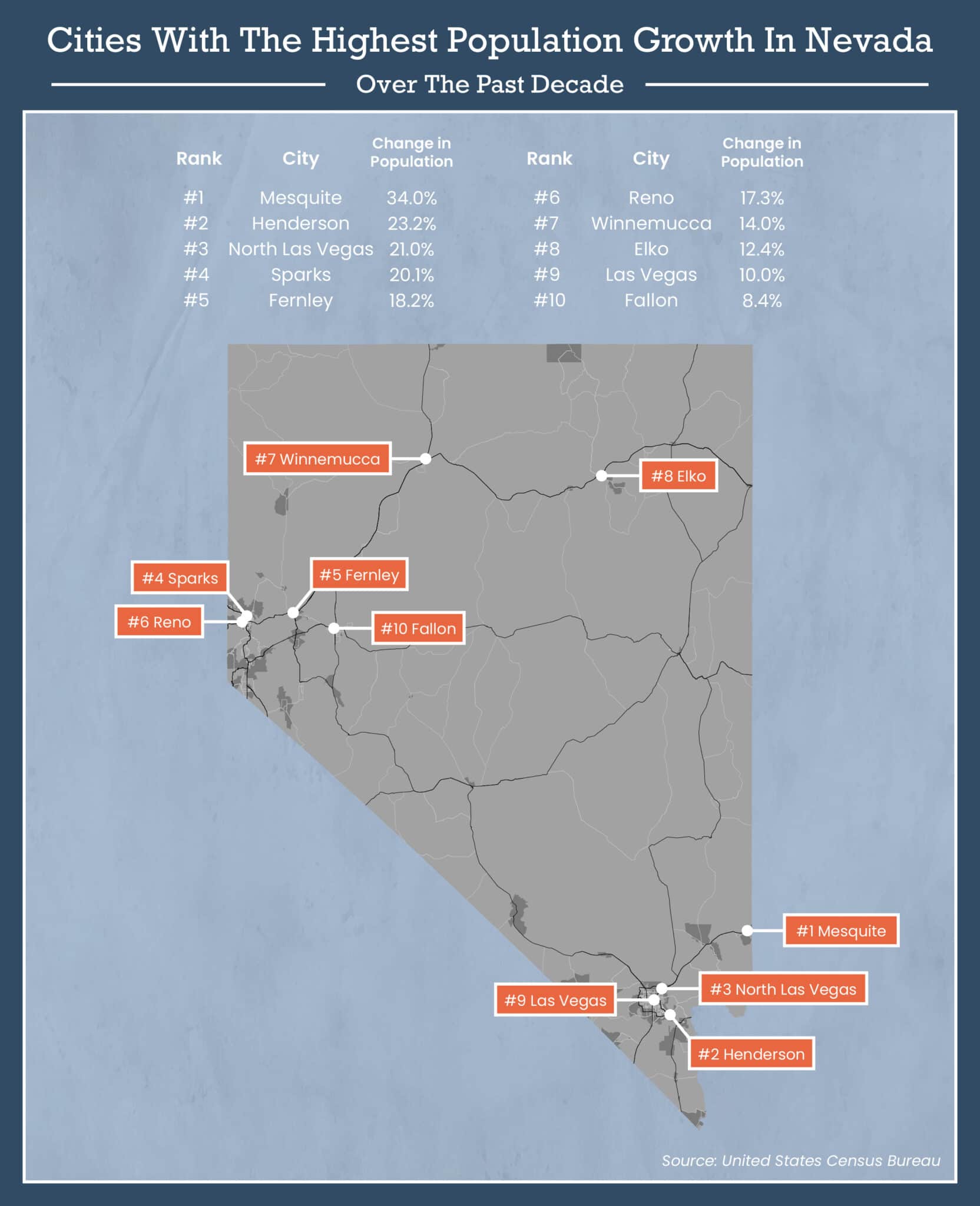 Of all the cities in Nevada, Mesquite has grown the most in population between 2010 and 2020. This city has grown from a population of 15,276 to 20,471, with 5,195 people moving into Mesquite in just ten years. This represents a population increase of about 34%.

There are many draws for moving to Mesquite, especially for men and women looking to settle down in a safe area and raise a family. Mesquite qualifies as a small town for a state like Nevada and retains its small town feel even today. Boasting a low crime rate and friendly neighbors, it’s no wonder that this is the fastest-growing city in Nevada. Mesquite is also close to state and national parks, which turn tourists into residents.

Located in the south of Nevada, Henderson boasts a more neutral climate, with balmy temperatures mitigated by the city’s situation close to the Las Vegas Bay and Lake Mead. In addition to a low poverty rate, Henderson also features a number of professionally restored historic properties. This is driving both history buffs and families to call Henderson their new home.

The main attraction of North Las Vegas is the Las Vegas Motor Speedway. This speedway is very popular as it is known for NHRA drag racing and two NASCAR Cup Series Race events. These events draw many to the city of North Las Vegas, and the proximity to the bright lights of Las Vegas have led to a large growth in commuters settling to the north as well.

The Sparks Marina is located in Sparks City, which is a dream for nature lovers. Featuring direct access to recreational water activities, camping sites, and plenty of free parking, this is a popular spot for both tourists and residents alike. The Marina is a public outdoor park with its own waterfront thanks to the beautiful Truckee River. Anyone can enjoy a number of outdoor activities, including biking, volleyball, paddle boarding, and more here, which makes the city particularly attractive to weekend warriors.

Many in Nevada have moved to Fernley over the years seeking out a simpler lifestyle over the fast-paced, bright lights of Las Vegas and other metropolitan areas. Fernley is a smaller town in this area, and it is known for its friendly neighborhoods. However, those who want a taste of the Vegas lifestyle without fighting traffic have access to two casinos directly within the town.

Reno is one of the most exciting cities in Nevada thanks to its diverse attractions. Reno is known for having one of Mark Twain’s favorite fishing spots on the Truckee River, making the area a draw for fishing enthusiasts. Pyramid Lake is also a well-known spot in Reno, a fishery and desert lake accessible through a number of water sports. Reno is also known for its wide variety of events and festivals and even dedicates an entire month out of the year to celebrate the arts.

Winnemucca has been called regularly the “friendliest town in Nevada.” It’s not a wonder they have grown 14% from 2010 to 2020. Ten years ago, Winnemucca had a population of 7,396. Now their population stands at 8,431, having added 1,035 residents in the time between the two censuses.

The small town of Winnemucca is known for its incomparable hospitality. Winnemucca has plenty of activities to pass the time, including casinos and gambling halls. This city also has access to beautiful trails and even some remarkable museums. In addition, Winnemucca has become particularly popular with commuters, as Interstate 80 runs directly through the town, offering convenient connections and access to larger metropolitan areas.

Elko has historically been known for being a “cowboy town.”  Even today, Elko is retaining its heritage through its annual National Cowboy Poetry Gathering, a week-long celebration of western heritage. This is encouraging western enthusiasts and those looking for a slower way of life to mosey into town. Many have not heard of Elko, and it is known as a hidden gem of a town—but this might be changing in the coming years, as more residents move into the area to fully appreciate Elko’s charm.

Yes, the city that Nevada is most known for, Las Vegas, has had a growth of 10% in the last ten years. This is pretty impressive considering in 2010, its population was already at 583,756 residents. After adding 58,147 new residents to the city of Las Vegas, the Entertainment Capital of the World now boasts a total population of 641,903 residents.

What is Las Vegas known for? What isn’t Las Vegas known for is the real question to ask. Las Vegas has any and every attraction you could want, from the most extensive and brightest casino resorts to some of the best restaurants in the world. Residents and tourists can even ride a rollercoaster through the famous Las Vegas Strip! As the country continues to recover from the COVID-19 pandemic, Las Vegas is seeing an influx of residents from more expensive urban areas like Los Angeles and New York City. Las Vegas’s growing popularity is strong among those looking to live the luxe life at more affordable rates than America’s most expensive cities.

Fallon is another smaller city in Nevada, currently maintaining a population of 9,327 people in 2020. This town has seen a growth rate of 8.4% over the last ten years. Between the years of 2010 and 2020, Fallon saw 721 men and women move into town and become new residents

Nicknamed the “Oasis of Nevada,” Fallon experiences a cold desert climate throughout the year, providing relief from the scorching temperatures found in the rest of the state. Fallon also has one of the lushest and green landscapes in the entire state, deeming it a true oasis in an otherwise barren and arid portion of the desert. The outdoors here are welcoming, which has made the area popular with nature lovers searching for more affordable property and easy access to parks and public greenery.

Unlike some other states, population movement trends in Nevada are not concentrated in either high population areas or low population areas. On our list of the fastest-growing cities in Nevada, you’ll notice an eclectic mix of both small towns and major cities are both gaining attention—a testament to the fact that Nevada as a whole is on the rise. But what exactly is drawing residents to the Silver State? Some of the biggest draws of life in Nevada include the following.

No matter if you’re moving to enjoy life in the fast lane in Las Vegas or you’re searching for a slower way of life in Fallon, a residential move can be stressful. Working with one of the best long distance moving companies in Nevada can take some of that stress off of your shoulders. From arranging storage services to helping you move faster, professional movers allow you to focus on the more exciting parts of your next great adventure.