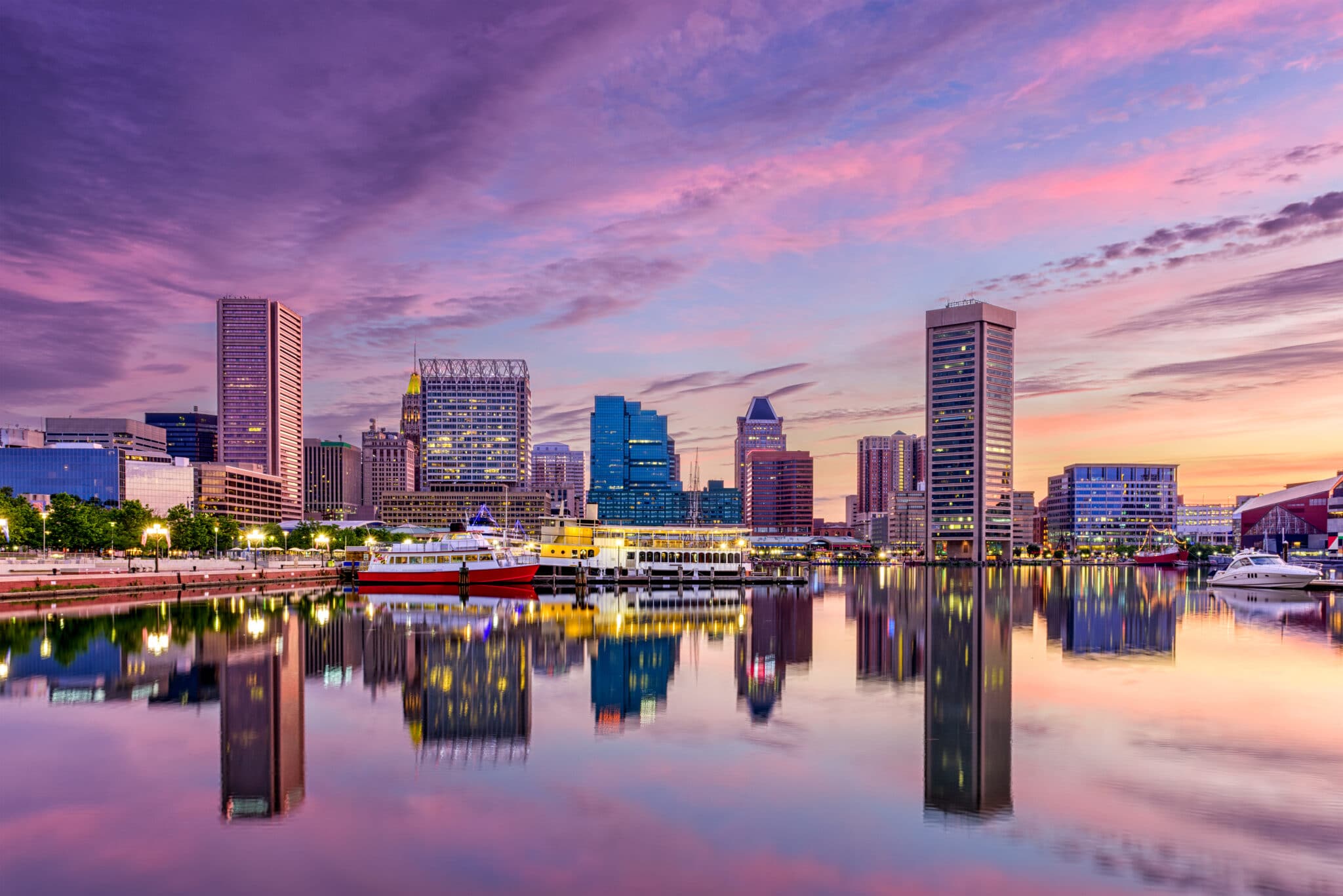 Defined by its abundant waterways and long coastlines, there’s plenty to love about Maryland—especially if you’re a native of the Old Line State. As more and more residents manage the aftermath of the pandemic, some surprising cities and towns in Maryland are seeing new growth. Let’s take a look at some of the fastest-growing cities in Maryland and why they’re attracting new residents. 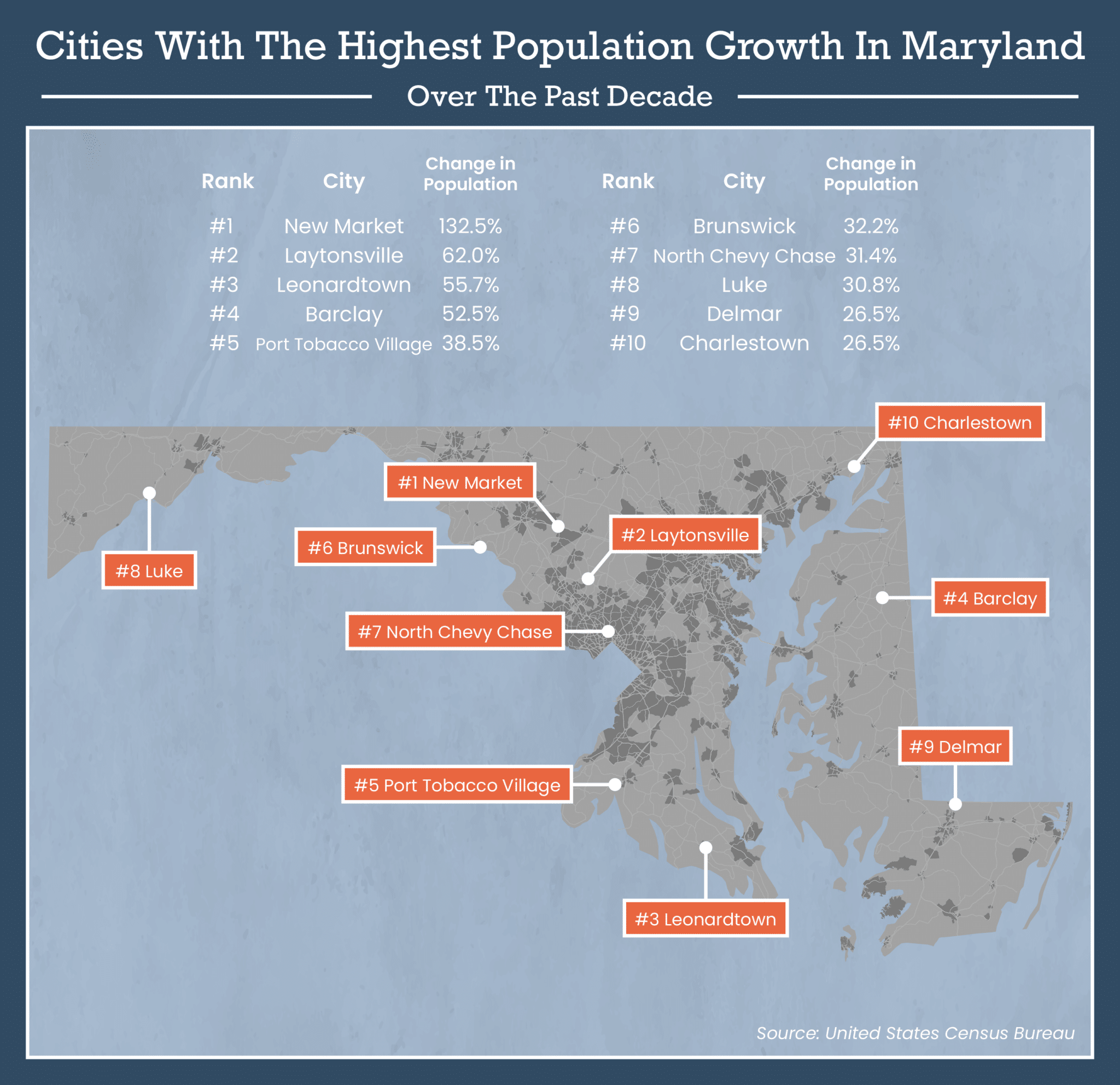 Billing itself as the “antiques capital of Maryland,” the fastest-growing city in the Old Line State is the small town of New Market. Between the years 2010 and 2020, New Market’s population grew from 656 to 1,525. This represents a total population growth of 132.5%, meaning that the population of the town more than doubled in the last decade.

Rich with history, it’s easy to see how residents of New Market are drawn to the town’s charm. Since its humble beginnings more than 200 years ago, residents of New Market have enjoyed a blend of unique culture and small-town community living. This makes the town particularly popular with parents looking for a safe area to settle down.

Nestled along the Potomac River is Laytonsville, the second fastest-growing city in Maryland. Between the years 2010 and 2020, the population of Laytonsville increased from 353 to 572. This represents a total population growth rate of 62%.

The main draw of the town of Laytonsville is the sense of community combined with quick access to the major highways that connect Virginia and Washington D.C. Residents are moving from the notoriously-expensive capital to enjoy more affordable costs of living and space while also maintaining quick access to the amenities of the big city. Climbing property values are a testament to this sudden growth boom.

Packed with natural beauty and access to a wealth of outdoor activities, the third fastest-growing city in Maryland is Leonardtown. Between the years 2010 and 2020, the population of Leonardtown expanded from 2,930 to 4,563. This represents a total population growth rate of 55.7%.

Situated directly on the Potomac River, residents of Leonardtown enjoy access to the shorelines in the summer seasons alongside a host of wineries and public parks. The town is perhaps most famous for its annual oyster-shucking championship, which attracts visitors from across the nation. If you’re looking for a slower way of life (and you’re a seafood lover) you’ll see why Leonardtown is expanding so quickly.

Located 40 miles northeast of Washington D.C., Barclay is a small town that’s seen exceptional growth in the past decade. Between the years 2010 and 2020, Barclay’s population increases from 120 to 183. Though this means that only 63 people moved into Barclay, it represents a 52.5% increase in total population.

About 46% of households in Barclay have children, making the area particularly popular with parents—and it’s easy to see why. Though Barclay residents have a longer commute due to the rural setting, they also enjoy a lower cost of living and plenty of fresh air. Properties are also significantly larger and more affordable in the area when compared to Maryland’s more metropolitan areas.

Port Tobacco Village can be an amazing place to live if you love exploring history-rich locations. Port Tobacco Village was settled by the English in the 17th century thanks to its easy access to shipping via the Port Tobacco River. The population of the town declined after the invention of the railroad, but many of the historic buildings have been preserved. An archeological and restoration project is also in place, breathing new life into this once-forgotten community center.

Situated directly on the Potomac River, Brunswick residents enjoy mild summers with easy access to water activities. The unemployment rate in Brunswick is lower than the general population and falling, as more businesses establish themselves in the area. The city also has a range of both historic sites and dining options, giving the area a more eclectic feel.

Residents of North Chevy Chase love enjoying the great outdoors—the town has multiple parks and hiking trails available with just a quick walk or five-minute drive. Residents who prefer swimming and fishing will find tons of fun in Rook Creek, which is located adjacent to the town. If you prefer to have the option to visit a larger part of the state, don’t worry—North Chevy Chase also offers access to the Capital Beltway via Maryland Route 185, which connects the town with most areas in the region.

Nestled in a loop of the North Branch Potomac River, residents of Luke enjoy exceptionally affordable living costs when compared with the rest of Maryland. Nearby mountain ranges place Luke in a gorgeous setting, and residents also enjoy low property prices. If you love having plenty of space for yourself and low costs of living, Luke might be the right town for you.

Located just south of the Delaware border, Delmar is our ninth fastest-growing city in Maryland. Between the years 2010 and 2020, the population of Delmar grew from 3,003 to 3,798. This represents a total population growth of 26.5%.

One of the contributing factors that may be playing a role in Delmar’s recent growth is small, local businesses. Small business owners have been moving to the area in order to escape the higher property costs of other major eastern cities. This trend could also be positive for Delmar’s job growth, allowing the town to become more metropolitan while also maintaining the same small-town feel that residents love.

Just a short drive away from the “City of Brotherly Love,” Charlestown is the final town on our list of the fastest-growing areas of Maryland. Between the years 2010 and 2020, the population of Charlestown grew from 1,183 to 1,496. This represents a total population growth of 26.5%.

Rich with both diversity and culture, Charlestown is part of the National Register of Historic Places thanks to its importance as a trading port in the late 1700s. Charleston also played a critical role in the Revolutionary War, making the city an ideal place to live for history buffs. Directly connected to multiple interstate highways, making visiting Philadelphia or another destination a snap.

Why are so many residents moving to small towns in Maryland? Some of the population trend factors playing into this exodus include the following.

No matter if you’re moving into the bustling city of Baltimore, the country village of Luke, or anywhere else in the country, working with one of the best moving companies in Maryland can help you enjoy an easier moving process. From assisting you with packing to ensuring that all your items are loaded into the truck without injury, a great moving company doesn’t only make your move faster—it also helps you reduce stress and get into your home safely.

To find the fastest growing cities in Maryland, Pro Mover Reviews collected population data over the last decade (2010-2020) from the U.S. Census and calculated each city’s change in population.