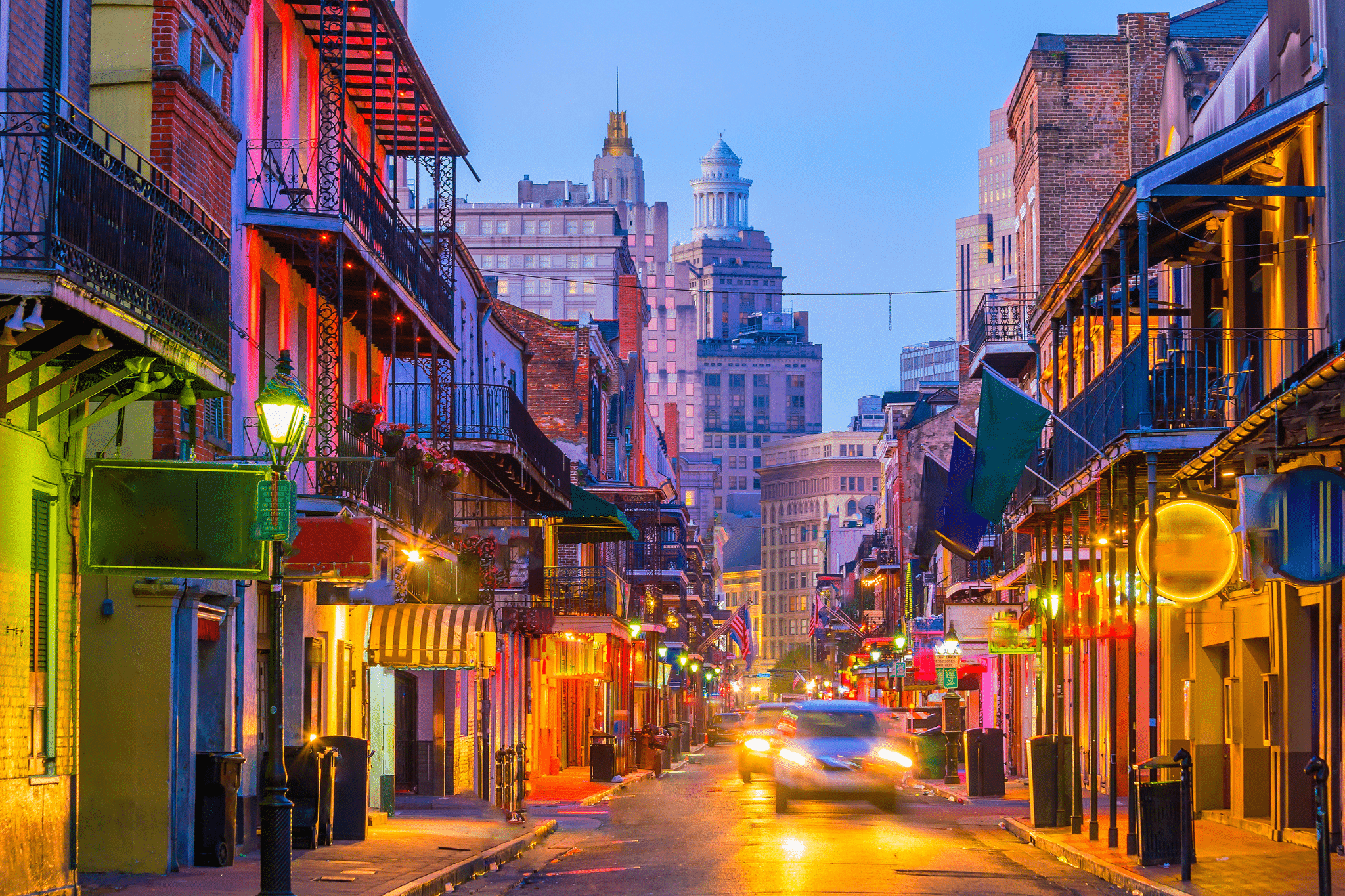 Full of both fun and history, you’ll need to search far and wide to find a state that’s quite as eclectic as Louisiana. The home of Mardi Gras, gumbo, and jazz music, there are plenty of things for residents of the Bayou State to be proud of—so much so that Louisiana is continuing to see new residents move into the state. In addition to new residents, some area of the state are also seeing trends toward growth. But which cities are showing the fastest growth rates? Read on to learn a little more about Louisiana’s hottest real estate markets and how population changes are trending. 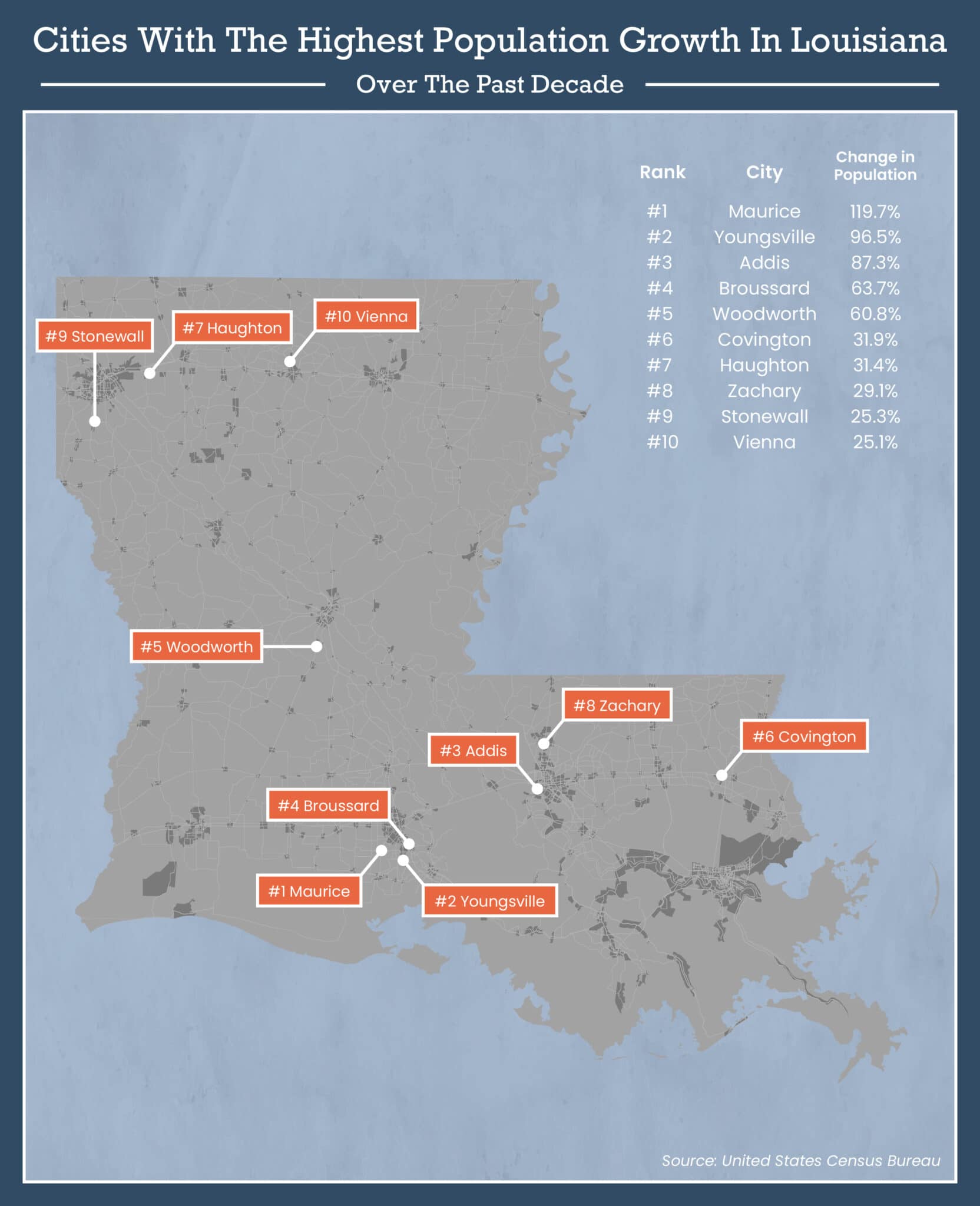 From the 2010 census until the next in 2020, the village of Maurice experienced a 119.7% growth in population. The population rose from 964 to 2,118. Although the population of Maurice has more than doubled, it’s still considered a “village,” as it only has two square miles of land area.

Maurice is located in Vermilion Parish, Louisiana, and it was founded as Mauriceville in the mid-1800s. In its early years, the town simply held a grocery store and two churches, as well as the family home of Maurice Villien, for whom the village is named. If you like seafood, especially Cajun shrimp and crawfish, Maurice is an excellent destination. It even has Hebert’s Specialty Meat Market, which sells Cajun spices and everything you need to bring Louisiana Creole flavor to your kitchen.

Youngsville is a village-turned-town located in Lafayette Parish. Between 2010 and 2020, it grew from 8,105 to 15,929 residents. This resulted in the town’s population swelling by 96.5%. Youngsville has actually been on Louisiana’s map as one of the fastest-growing towns by population since 2005; it was then that Youngsville was promoted to “city.”

Over one-third of the population living in Youngsville in their mid-twenties has achieved a bachelor’s degree or higher, which makes this area one of the most educated places in all of Louisiana. Youngsville has a comprehensive sports complex, complete with beach volleyball courts, tennis courts, lighted fields, playgrounds, a walking trail, batting cages, and soccer, baseball, and softball fields. This is a town where an active and healthy community lifestyle is promoted—which can make this area ideal for families or anyone who wants to maintain a healthy lifestyle.

From 2010 to 2020, Addis experienced an 87.3% growth in population. In 2010, Addis was home to 3,593 residents—but by 2020, 6,731 people called the town home. It was founded in the late 1800s as Baton Rouge Junction, the literal joining point of the Texas and Pacific Railroads. It was renamed Addis to honor the railroad official who had petitioned the railroad to build a station and hotel at the junction, among other needed amenities.

Addis is located in West Baton Rouge Parish. It has a land area of 1.8 square miles. Addis has a diverse population, with about half its residents identifying as Caucasian. African American, Asian, and Hispanic residents make up the other half of the town’s population. Addis is situated only a few minutes’ drive from Louisiana’s capital city, Baton Rouge, and so it’s an ideal place for commuters to the big city. Addis remains proud of its small-town heritage, and it preserves that idyllic feel while being close to metropolitan conveniences.

Broussard was officially designated as a city in 2002, and it is located in both Lafayette and St. Martin Parishes. In 2010, the population of Broussard was 8,197 residents, but by the 2020 census, it had grown to 13,417 residents. This change represents a total growth rate of 63.7%.

Broussard is a booming agricultural and business center. Its main products are sugarcane, soybeans, and hay, as well as cattle and horses. Not only is it an agricultural hub, but it’s an industrial one as well, with oil distributors, real estate developers, manufacturing, and more. Broussard, Louisiana, is home to more than 300 businesses, all within a land area of 11.4 square miles. This means that jobs abound in many unique industries. Broussard also has about a dozen sites included on the National Historic Register, including old family homes and schoolhouses. It’s an interesting mixture of booming industry and scenic, historic suburbs.

Located in central Louisiana’s Rapides Parish, the town of Woodworth experienced a population growth of 60.8% between the censuses of 2010 and 2020. In 2010, Woodworth’s residents numbered 1,096; by 2020, that number had reached 1,762. This town is nestled between pine trees and rolling hills, and it holds several nature centers as well as walking and hiking trails to explore. It also has a campground called Twin Lakes, which is a spiritual retreat where campers can hike trails, swim in the swimming pool, and pray in the tabernacle.

Woodworth is home to Tall Timbers Convention Center, which is a sizable facility located on over 123 acres of land a few minutes outside of town. It has archery, rock climbing, a zip line, and an obstacle course and has meeting space that can hold up to 600 people. If you are looking for a Louisiana town that is located in the middle of nature yet is still close enough to the city of Alexandria for a quick commute, Woodworth could be the choice for you.

Covington is a city located in St. Tammany Parish, Louisiana. From the 2010 census to the 2020 census, Covington’s population grew 31.9%, but it was increasing even before that because of refugees from New Orleans fleeing the damage done by Hurricane Katrina. In 2010, Covington’s residents numbered 8,765. At the 2020 census, that number had increased to 11,564 residents.

The area now known as Covington was first settled by Europeans in 1800, making it one of the oldest places on this list. Since New Orleans is only about 40 miles away, many residents still commute to work in the Big Easy and return home to Covington when the day is through, just like Covington residents have been doing for the past 100 years. If you’re looking for a scenic locale to settle down or raise children, or even a restful place to call home where you can still commute to the big city, Covington is a great option.

At the 2010 census, Haughton was home to 3,454 residents. Over the next ten years, it grew by 31.4%, with the residents in 2020 numbering 4,539. Haughton has a total land area of 5.3 miles. Interstate 20 touches the tip of the town, making commuting to Shreveport or Bossier City convenient.

The income of Haughton’s households is around $77,000 per year, which makes the town’s general population well above the poverty line, unlike some of the towns and cities previously mentioned on our list. This could be due to the availability of jobs in Bossier City and Shreveport, which have booming medical, service, gambling, manufacturing, and even film industries. If you work in any of these areas, Haughton can provide a combination of affordable real estate and a quick drive to work.

Zachary is a city located in Louisiana’s East Baton Rouge Parish. Between 2010 and 2020, its population grew from 14,960 to 19,316, marking a 29.1% growth rate. Zachary was developed around a railroad depot and was named for the original owner of the land who sold his farm to the Illinois Central Railroad.

The city of Zachary is located only 16 miles from Baton Rouge, making it a wonderful place to call home while still situated near a metropolitan area. Schools in Zachary are ranked as some of the highest-achieving in the state, and two of the region’s major medical centers are located in the heart of town. Main employers within Zachary are the school system, paper mill, Lane Regional Medical Center, and the Baton Rouge Airport. Zachary has a rural-suburban feel without separating its residents from the accessibility of urban jobs and amenities.

Stonewall has a total area of 7.6 miles, within which are plenty of local shops and restaurants, along with several parks and North DeSoto High School. Although the economic opportunities are limited within the town of Stonewall itself, Shreveport offers bountiful job options and is extremely close.

Vienna, Louisiana, finishes up our list in tenth place. Located in Lincoln Parish 2010, Vienna had a population of only 386 residents in 2010. By the 2020 census, the population had grown by 25.1%, now hosting 483 residents. This is by far the smallest village on our list, but it still experienced notable growth in the last decade.

Vienna is an hour’s drive east from the city of Shreveport and just a few miles outside of the larger city of Ruston, which is the Lincoln Parish seat. Ruston is home to Louisiana Tech University, which is a large employer in the area. Vienna can be a great place to rent a home or apartment for college students, or to raise a family in a small village close to bigger towns. It can also be an especially great place for affordable nightlife opportunities thanks to the university-aged population.

No matter where you’re moving, working with one of the best long distance moving companies in Louisiana can make your move significantly easier. Contrary to popular belief, movers can do much more than simply load up your moving truck and drive it to your new property. Depending on the company you work with, you might be able to schedule everything from packing services to crating for fragile items like antiques. The best moving companies take the stress off your shoulders, allowing you to pay more attention to other preparations you need to make for your new home.