Kara Griffin
Did you know that Booneville, Mount Washington, and Manor Creek were the fastest growing cities in Kentucky in the last decade? If you didn’t, you’re not alone. Kentucky’s moving trends are unique—and they might shock even lifelong residents of the Bluegrass State. Read on to learn more about the hottest real estate markets in Kentucky right now. 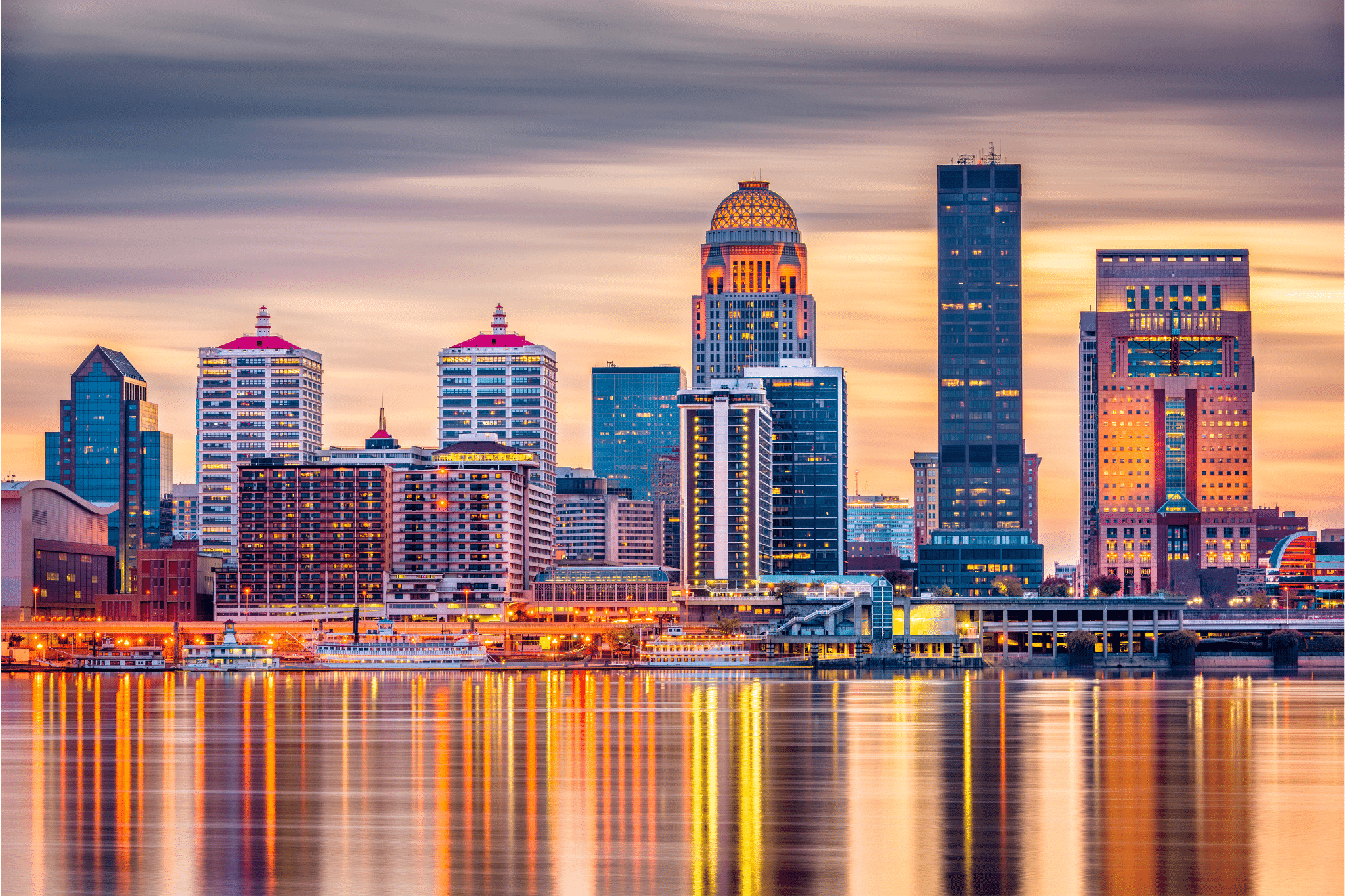 If you can’t get enough of nature and you aren’t afraid to get your hands a little dirty, you might fit in perfectly in Kentucky. With two national parks, almost 40,000 acres of state forests, and a thriving manufacturing industry, Kentucky’s residents know how to relax and when it’s time to get down to business. If you’re a lifelong resident of Kentucky, you might assume that outsiders moving to the state are heading to one of the Bluegrass State’s two major metropolitan areas: Lexington and Louisville. However, the truth is that neither of these cities made our list of the fastest growing cities in Kentucky.

You might be surprised to learn exactly which cities in Kentucky are seeing the highest population growth—some areas are so small that you might not even know where they are, even if you were born and raised in Kentucky. Read on to learn more about the major trends shifting Kentucky’s real estate market. 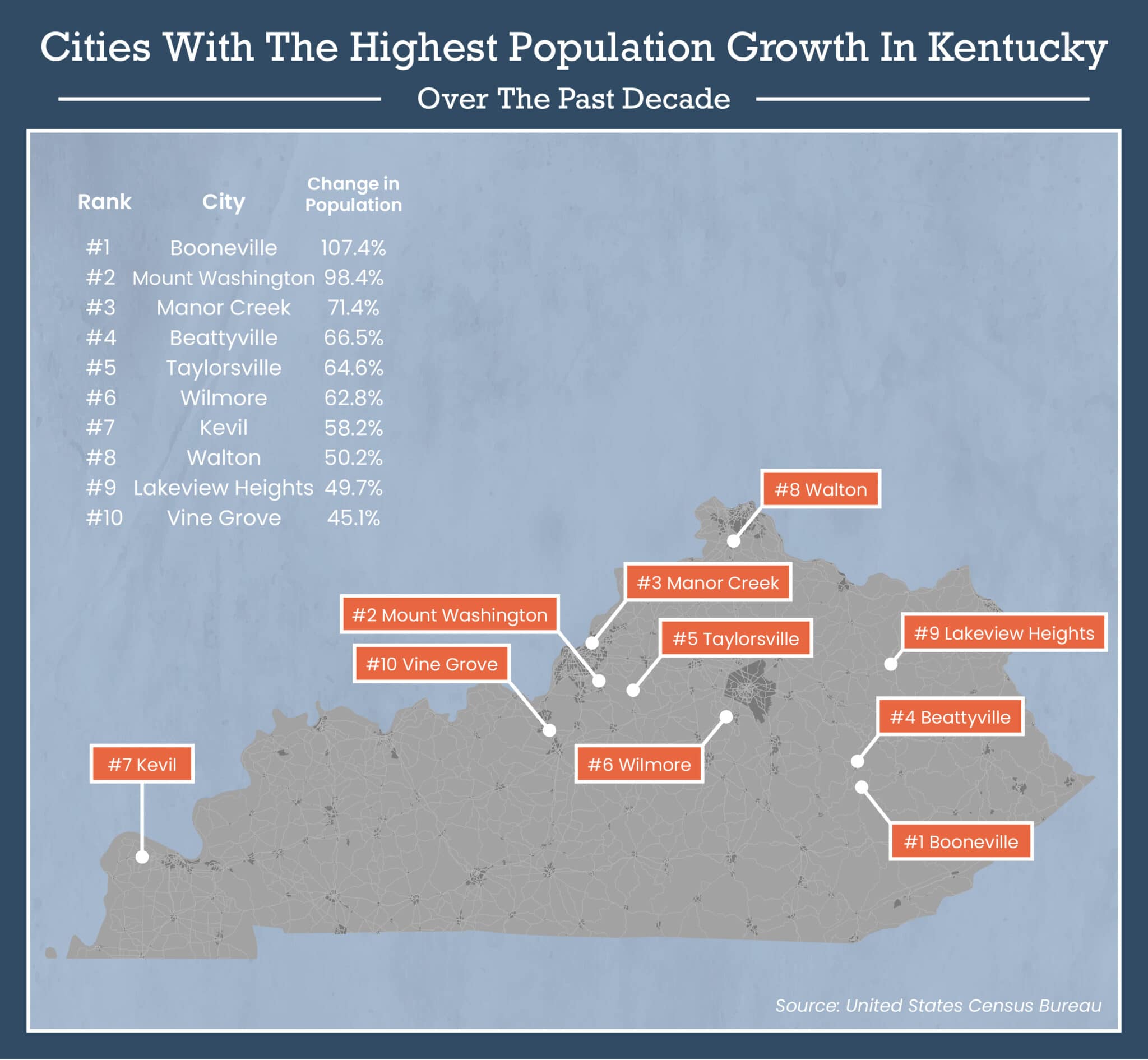 According to the 2010 census, Booneville only had 81 residents. That number has grown to 168 individuals by 2020, giving the tiny city a growth percentage of 107.4% in those ten years. The town was originally named Moore’s Station because of the person who owned the most land there. Eventually, the name changed to Boone’s Station and then Booneville, both in honor of the frontiersman Daniel Boone, a popular figure in Kentucky lore even today.

The land area of Booneville is 0.6 miles, and its population is very close knit. During the Civil War, it saw conflict between the Union and the Confederacy as both forces traveled through, but Booneville escaped the major destruction that many other Kentucky locales faced during the conflict. This makes the area as rich in community as it is in history.

Mount Washington is located in Bullitt County in north central Kentucky. From 2010 to 2020, it experienced a population boom of 98.4%, with the population nearly doubling from 9,117 to 18,090. This rise in population can be explained by Mount Washington becoming a commuter city for those who hold jobs in Louisville.

The population density is quite high, with over 18,000 people living in just over six miles of land area. However, this is a peaceful town to raise a family and still make a good living—the high-paying jobs in Mount Washington have all but disappeared, but it is able to go on because of its proximity to Louisville, and its residents have adapted to working there over the past three decades. Real estate in Mount Washington is also more affordable than in Louisville, meaning that residents who move here have access to more opportunities to own their own home.

Between 2010 and 2020, Manor Creek has seen a rise in population from 140 residents to 240, resulting in 71.4% growth and making it number three on this list. Slightly more diverse than the previously mentioned towns, Manor Creek’s population is about 90% white, 2% African American, 5% Asian, and the rest made up of individuals of two or more races. The land area of Manor Creek is only 0.03 square miles.

Although this is likely due to the tiny population, Manor Creek is a comparatively affluent community, with the median household income being over $76,000 per year. Census data indicates that there is no one living in Manor Creek living below the poverty line, unlike many other areas of Kentucky. Manor Creek’s growing popularity is likely due to its positioning at the crux of Interstate 265 and Interstate 71, both major highways that offer quick access to every major area of Kentucky.

In 2010, Beattyville, Kentucky, had 1,307 residents according to the census. By the 2020 census, that number had risen to 2,176 people, giving the town a growth rate of 66.5% over the past ten years. Beattyville is located where the North and South Forks of the Kentucky River converge. It was named after a pioneer called Sam Beatty.

Although there are no institutions of higher education within Beattyville itself, there are several colleges and technical schools within an hour’s drive from the town, including Eastern Kentucky University, Hazard Community and Technical College, and Kentucky Mountain Bible College. There are several historical sites of interest in Beattyville, such as Fitchburg Furnace and Rocky Woodland Forge. There are also many family-friendly activities to enjoy, such as fishing, golfing, canoeing, and ziplining.

Over the past decade, Taylorsville has enjoyed 64.6% growth in population. In the 2010 census, the population was just 763; by 2020, 1,256 residents had made their home in Taylorsville. Taylorsville was founded over 220 years ago on the land of Richard Taylor, who was the father of President Zachary Taylor.

Taylorsville Lake is hailed as the most well-stocked fishing lake in the state. Deer and turkey hunting are popular pastimes, as are many other outdoor pursuits, like hiking or horseback riding on the two dozen miles of trails located in Spencer County. Taylorsville and by extension Spencer County are rural havens, but the county is conveniently in close proximity to larger urban centers like Louisville, Shelbyville, and Lexington.

The town of Wilmore is located in Jessamine County, Kentucky. Between the years 2010 and 2020, it experienced a population growth of 62.8%, with the population rising from 3,686 people to 5,999. This is partially due to the fact that the renowned Asbury University (formerly called Asbury College) is located here, so many residents are students.

Wilmore began its life as just a post office, but eventually it evolved into a railway station and then a city. It’s home to the lovely Centennial Park, which provides its residents with 32 acres of green space. Wilmore has a rich historical heritage and five National Register Historic Districts. This is a great place for anyone to call home, whether you have children or are child free, single or married. It’s also a great place to find fun, affordable activities thanks to the college-aged population.

The small town of Kevil is part of Kentucky’s Ballard County, which is at the far western tip of the state. In 2010, the population of Kevil was 376 people, but by 2020 that number had increased to 595 residents. This has resulted in 58.2% growth in terms of population. It was founded as a stop on the Illinois Central Railroad and received its post office in 1903.

Kevil is part of the wider Paducah micropolitan area. This is made up of five counties, four in Kentucky and one in Illinois. Kevil does have many options in regard to public schooling because of its central location in Ballard County. Interestingly, most of the homes in Kevil were built to house the workers staffing the uranium plant that was established in 1950 in the area.

The city of Walton is located in both Boone and Kenton Counties. Between 2010 and 2020, Walton’s population grew 50.2%, from 3,635 residents to 5,460. Officially established in 1840, Walton is located within Kentucky’s northernmost tip. Walton’s claim to fame is that in 1901, it was the first city to have a dog for a mayor, Jiminia the Great Dane.

Walton is strategically located between three metropolitan areas, with Cincinnati, Ohio, being the closest at only 21 miles away. Louisville and Lexington are within two hours’ drive of Walton. This has made the town particularly popular with commuters. Since the 1970s, Walton has held an “Old Fashion Day” during which residents decorate their businesses and homes with antiques and heirlooms, even dressing up in nineteenth century dress.

In the year 2010, Lakeview Heights had a population of only 185 residents. During the 2020 census, the count was up to 277, causing a population growth of 49.7%. This small locale is located in Rowan County, Kentucky, on Kentucky’s eastern side.

Despite its size, Lakeview Heights has its own municipal park complete with a playground for children. This has made the area popular with families looking for a combination of a well-connected community, a safe area, and a place with greenery to enjoy. Unlike some of the much older towns and cities we’ve mentioned, Lakeview Heights was not officially incorporated until 1979.

About 10% of the population of the city of Vine Grove lives at or below the poverty line; however, it is rich in public park spaces and after school activities. It’s about an hour outside of Louisville and has a deep military history and as a place of Civil War significance because it’s located ten minutes away from Fort Knox. If you’re looking for a small town to settle down in that’s still within the vicinity of urban centers, Vine Grove is a great, affordable option.

Now you understand which cities and towns are seeing the fastest growth in Kentucky—but why are these areas attracting new residents? Some of the reasons why the cities listed above are seeing exponential growth for the following reasons.

Are you thinking about making a move to the Bluegrass State? If you are, you might want to consider working with one of the best long distance moving companies in Kentucky. A great moving company doesn’t only take the hassle out of loading up a moving truck—they can also handle your packing, arranging your storage, and leaving you with more time to focus on what’s really important.