Kara Griffin
Thompson, Pingree Grove, and Volo have all doubled their populations in the last decade, making these three cities the fastest-growing in Illinois. But which other parts of the Prairie State are seeing high population growth? Our guide to the cities with the highest population growth in Illinois will help you explore more of the state’s hottest real estate sectors. 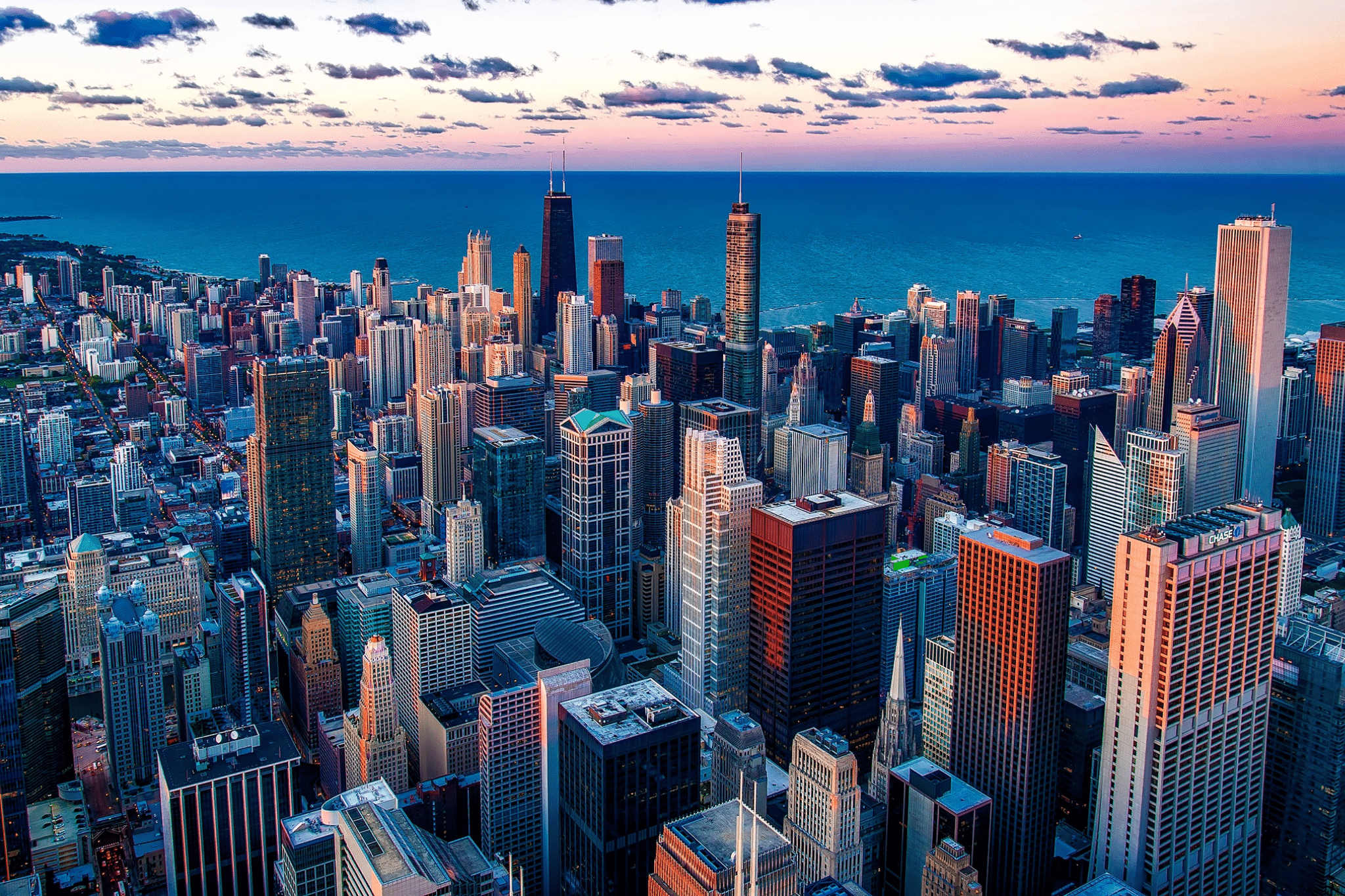 Though most people know Illinois as the city of Chicago, lifelong residents know that there is much more to the state than the sleek skyscrapers of the city. Illinois is also home to a large number of small, close-knit communities—some of which are showing exceptional growth, particularly in the last decade. Learn more about the hottest real estate areas in Illinois with our list of the cities and small towns that have shown the largest growth rates in the Land of Lincoln. 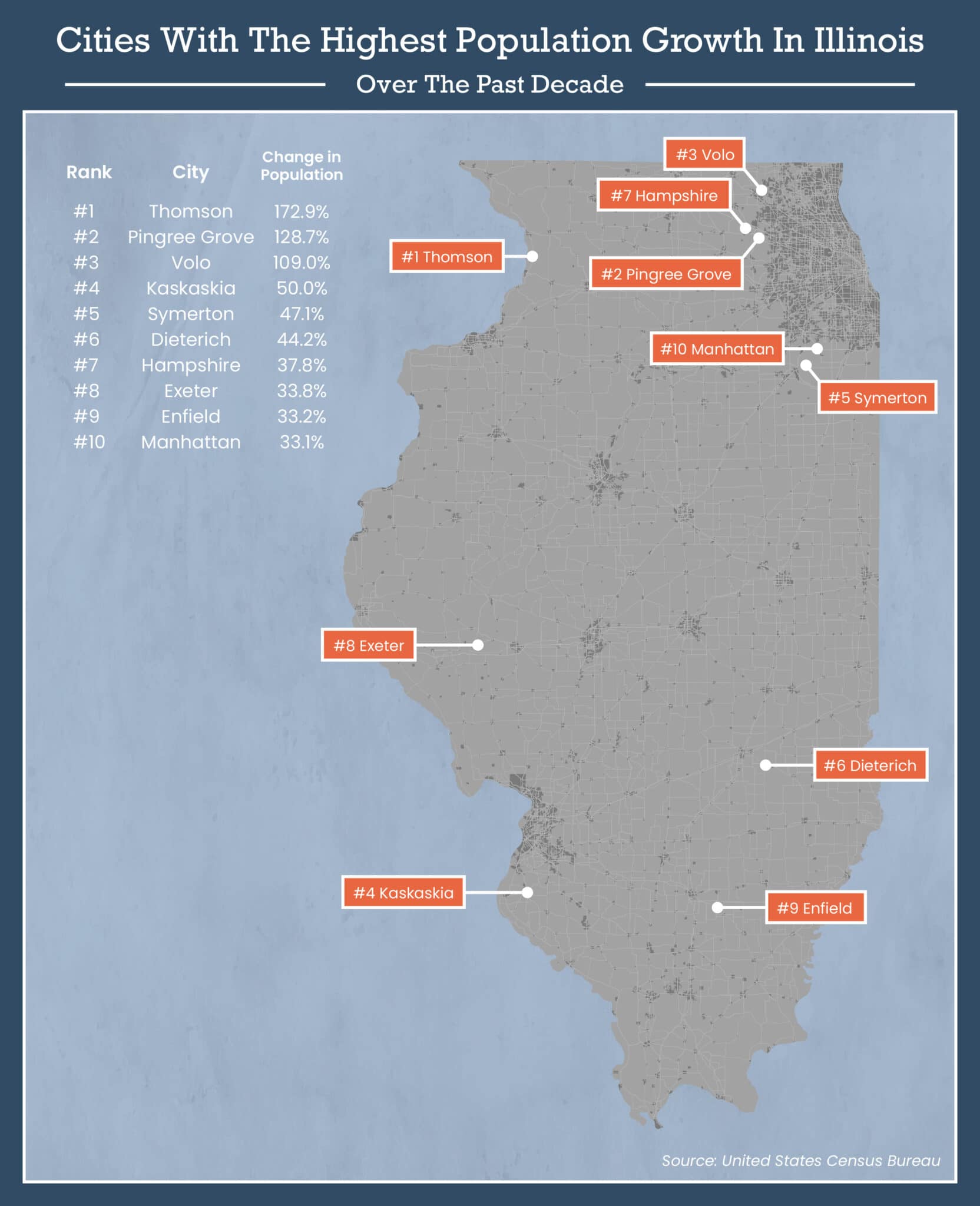 Thomson is a town near the Mississippi River in the northwest of Illinois which takes first place in our list of the fastest growing cities in Illinois. In just ten short years, Thomson has almost tripled their population. This town has grown from a population of only 590 people in 2010 to a population of 1,610 in 2020. This represents a total population growth rate of 172.9%.

Thompson has been the most popular city to move to in the state for years. The town is located along one of the most scenic routes in the country, known as “The Great River Road.” Many choose this town as their home for its beautiful views of the Mississippi as well as excellent fishing opportunities. Here you can find a small-town life combined with exciting recreational activities and close access to all of the amenities you need that most small towns may lack.

Pingree Grove is known to be full of parks and a great place if you enjoy getting outside. This village is also a suburb of Chicago, which makes it an ideal place to live for residents who want to enjoy more affordable housing prices as well as quick access to the big city. People flock to settle in Pingree Grove for its excellent school system and lack of crime, which are significant benefits in a place so close to Chicago.

Volo is a village that has only been incorporated since 1993. Volo has more than doubled its population since 2010, when 2,929 people were living there. The population has grown to 6,122 residents in 2020, marking it as one of the cities with the most population growth in Illinois.

The village of Volo is known as a family community where family values are placed higher than anything else. Volo contains the Volo Auto Museum and is located near the Volo Bog State Natural Area, which can provide a multitude of entertainment and education opportunities. It’s also home to Jurassic Gardens, a thrilling dinosaur encounter experience that kids will want to return to again and again.

Kaskaskia, named after the indigenous people who initially settled the area, has had an impressive bit of growth over the past ten years. In 2010 the population of Kaskaskia was 14 people and has now increased to 21 permanent residents. This means that this tiny area has grown its population by 50% in the last decade.

The city of Kaskaskia has an exciting history. This city is now an island that was created by the Mississippi River flooding through the low part of the land and permanently turning this city into a defined region. Kaskaskia was also the first capital city of Illinois, and it is located directly on the border between Illinois and Missouri. This can provide you with a range of travel opportunities while also living in an area rich with history.

The growth of another small town known as Symerton has been quite impressive since 2010, when the population was only about 87 residents. In 2020, the population of Symerton had grown to 128 people. This means that the small town has grown by about 47.1% in the last decade.

Symerton offers its residents a small-town feel in a rural area. The long-standing houses are beautiful here, with the newest having been built in the 1930s. However, this doesn’t mean that your only housing options are dilapidated; the town has been on a campaign to preserve these historic homes, updating them with modern conveniences. Symerton is close to Lake Michigan, offering outstanding recreational options for visitors and residents alike. The lake views are beautiful, and the lake activity is even more entertaining, making this an ideal area for outdoor enthusiasts.

Dieterich is a tiny town as far as the area it encompasses. The entire town only takes up a bit more than one square mile. In this small amount of space, 890 people live. Just ten years ago, Dieterich had a population of 617 people, which means that the town has seen a growth rate of 44.2% within the last decade.

The community of Dieterich is a closely-knit group of people, but who are always ready to welcome newcomers. The people of this town have been known to be hard-working and proud people who serve their country—a Memorial Arch built in the main park dedicated to those who fought in WWI is a testament to this close-knit community and local pride. Today, Dieterich is growing quickly, with more and more businesses moving into the small area, bringing new residents with them.

The town of Hampshire, which is right on the way between Rockford and Chicago, has recently become a popular place to move to in the state of Illinois. The growth of the population had increased at a steady rate from 2010, when the population was only 5,563 people. Ten years later, there are now 7,667 residents living in Hampshire.

Hampshire is known to be overall one of the absolute best places to live in Illinois. The housing is excellent here as well as the school system. Hampshire is also known to have multiple excellent outdoor recreation options, despite its small population and size, with the Hampshire Forest Preserve and the Hampshire Park District within walking distances. This makes the area ideal for both families and nature enthusiasts alike.

Though Exeter is a very small town when compared to the other items on our list of the fastest-growing cities in Illinois, its convenient location may be increasing the town’s popularity with commuters. Exeter is located in the center of three major highways that connect Illinois: the IL-100, Route 76, and US-36. This ease of transportation combined with low costs of living and large property availability make Exeter a choice location for commuters.

Enfield is positioned near both the Kentucky and Indiana borders. This small town has seen a growth rate of 33.2% in ten years. In 2010, the population of Enfield was 596 people. By 2020 the population had increased to 794 permanent residents.

Enfield is a popular rural town among retirees looking to settle down away from the big city life. Enfield’s employment rate and job growth are experiencing positive growth as the population increases, suggesting that this town isn’t only for those who’ve retired. With wide open spaces, affordable property values, and a more intimate local schooling district, Enfield is also a popular destination for families looking for safety and security for their children.

The public schools in Manhattan are rated to be some of the best in the state, which can be a major draw for those looking for the best education possible for their children. With Manhattan’s close proximity to Chicago and relative affordability of living, it’s no wonder it’s a popular place to call home for both families and young professionals. The trend recently is for those in Chicago to move to smaller towns for their lack of crime, highly rated schools, cost of living, and that comfortable small-town feel you can’t get in a large city.

If you’ve never lived in Illinois before, you might be surprised that population trends are leaning towards the growth of very small towns. Six out of ten of the areas that made our list of the fastest-growing real estate markets in Illinois can be classified by many sociologists as “villages,” as they have current populations of fewer than 2,500 residents. Meanwhile, larger cities are showing significantly less growth—for example, Chicago saw an increase in population of just 1.9% over the past decade.

What is causing this shift in population trends? Some of the reasons why more residents of Illinois are heading for rural areas include the following.

No matter if you’re moving across town or you’re heading from New Mexico to Illinois, moving can be a major stressor on both your family and your wallet. Working with one of the best long distance moving companies in Illinois can make the seemingly impossible task of moving easier. Consider getting a quote from one of the top-rated moving companies in your area before planning your moving date—you might have no idea how much you could be saving.