Kara Griffin
If you think that Atlanta or Augusta are the fastest-growing cities in Georgia, you’d need to think again. Morgan, Pendergrass, and Chamblee showed the highest growing populations in the last decade. Read on to learn more about some of the most surprising hot real estate areas in the Peach State. 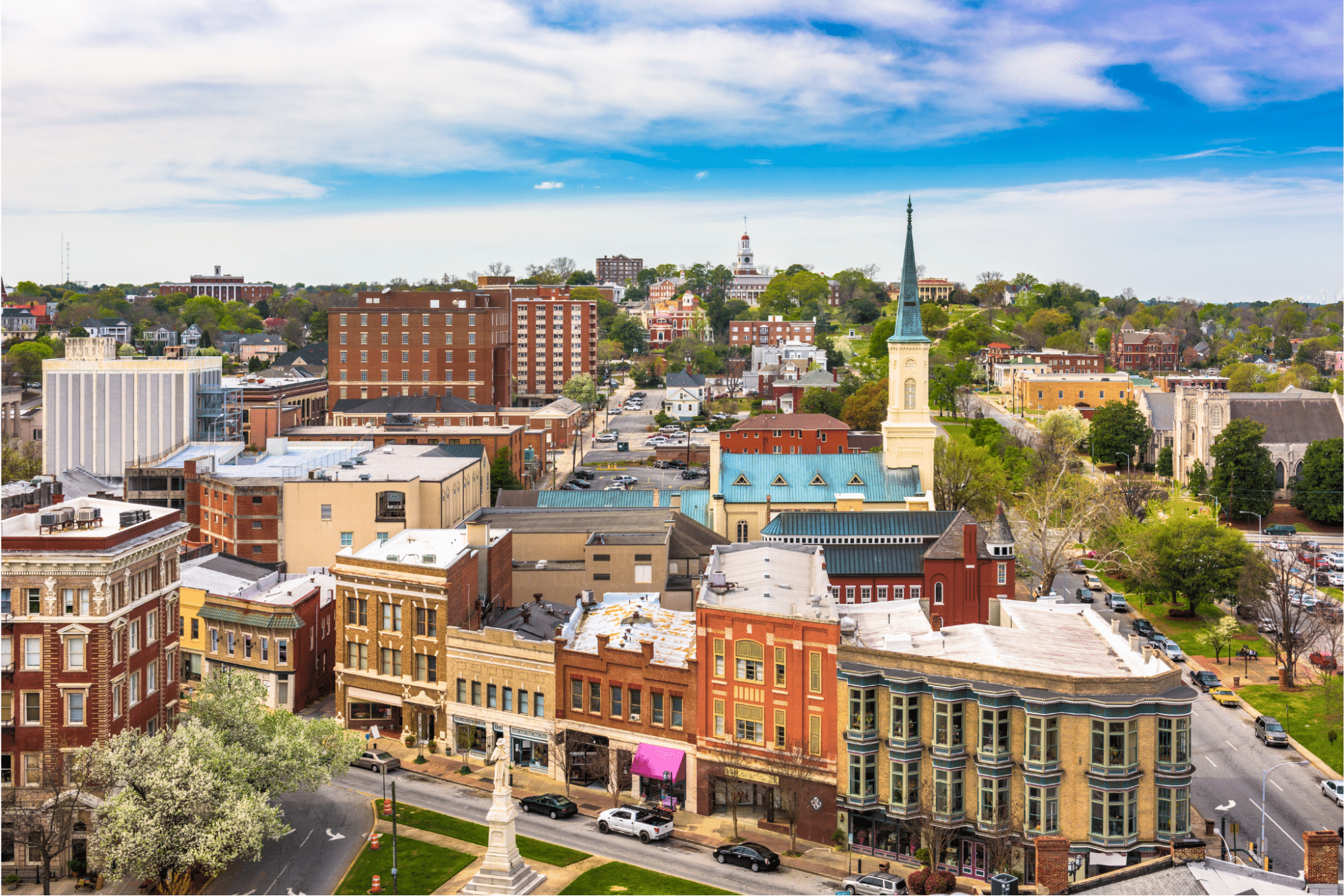 Known for its fresh, delectable produce and hundreds of years of rich history, Georgia is one of the most significant states on the eastern coast of the United States. While you might expect cities like Savannah and Atlanta (which are the richest in culture and history) to be the fastest-growing areas of the state, the truth is that many of Georgia’s residents are moving from highly concentrated areas to cities and towns with smaller populations and milder climates. Let’s take a look at some of the hottest real estate areas in Georgia right now. 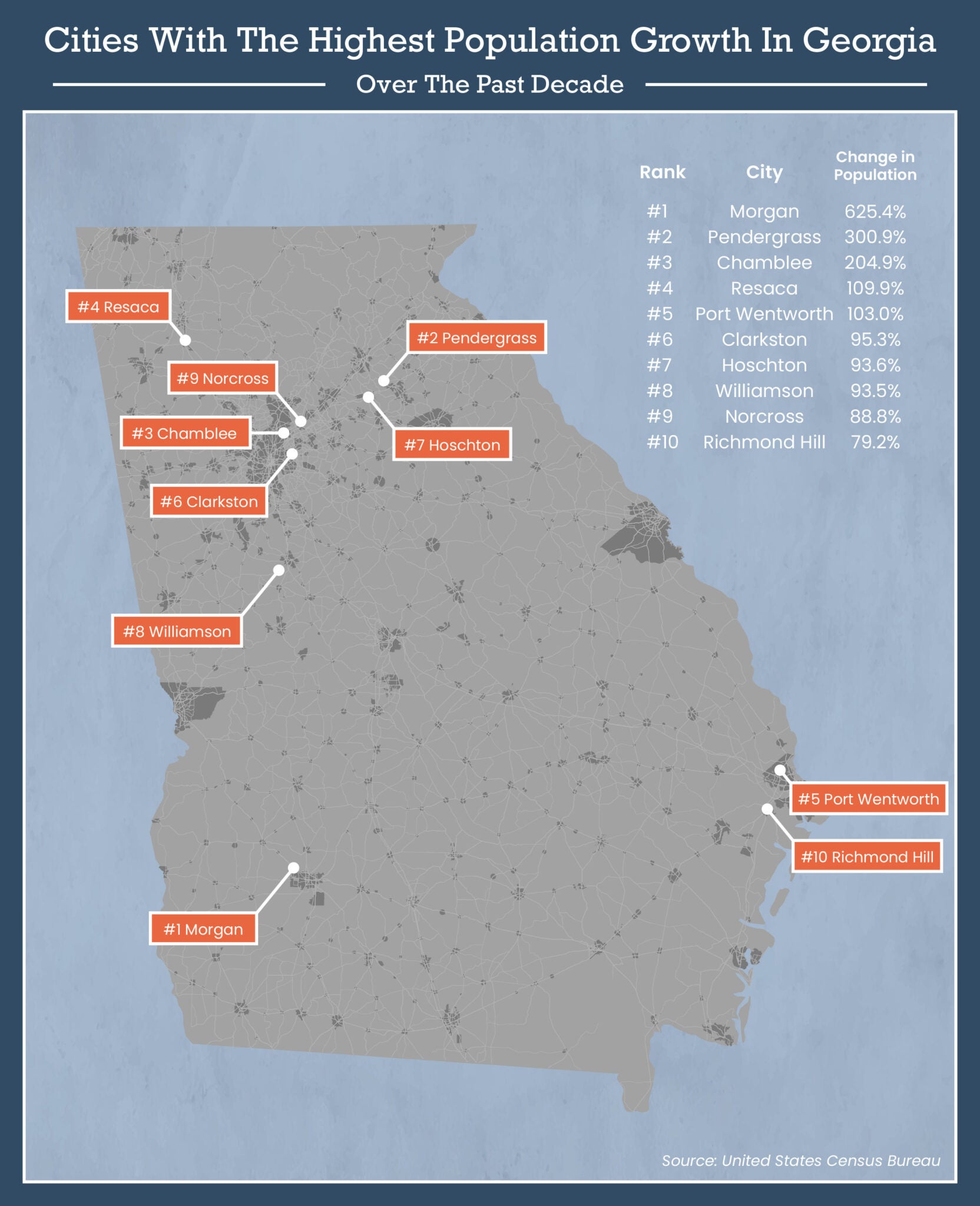 Morgan City may not be a place you are familiar with, even if you’re a lifelong resident of Georgia. Many have never heard of this city, and yet the population had grown from a mere 240 in 2010 to a whopping 1,741 in 2020. In only ten years of time, this tiny town has grown exponentially by more than 600%. The city of Morgan is a rural town but has had tremendous job growth in recent years, leading to a much higher population.

Over time, more residents have moved to Morgan City, from nearby areas and even other states. This is due to a low unemployment rate (which is 2% less than the national average) as well as a low cost of living. The cost of living in Morgan City is almost 27% less than the national average, making the area ideal for residents looking to save. The price of houses in Morgan is also low, leading many to move there for the prospect of homeownership alone.

Like Morgan, Pendergrass also started with a very small population of only 422 people at the beginning of the last decade. However, in ten years between 2010 and 2020, the city grew to a grand total of 1,692 residents. In those short ten years 1,270 people moved to Pendergrass, representing a total growth rate of more than 300%.

Pendergrass is known for having milder weather than other areas of Georgia, encouraging local residents unsatisfied with the warmer parts of the state to make their home there. The unemployment rate is much lower than the national average, and job growth has been positive for years. The houses in Pendergrass town have also appreciated considerably compared to similar areas, encouraging investment-savvy residents to purchase property and settle down.

In 2010, Chamblee started off with a decent population of 9,892 already. By 2020, Chamblee had boomed to a population of 30,164. The city of Chamblee gained 20,272 residents, more than tripling their original population. This is partly due to annexations of local areas, which  allowed the city to grow larger and house more people.

Chamblee is quite close to Atlanta, making it an ideal place to live for commuters looking for more affordable properties than what Atlanta may offer. Many who work in the big city can easily commute from Chamblee. Chamblee continues its commercial growth as well, with many attractions for its residents to enjoy as well as local businesses moving in to take advantage of the space. Even now, the city’s residents are working to rebuild historical buildings and create new structures to replace old ones, making Chamblee an exciting place for both history buffs and those who love modern conveniences alike.

Resaca is a small town in Gordon County, Georgia. This town’s population has doubled between 2010 and 2020. In 2010, the population of Resaca was only 544 people, and now it is up to 1,142, showing a difference of 598 people moving into this town. This represents a total population growth of more than 100% in the last ten years alone.

Resaca is desirable to many who want to live in a smaller town with fewer people. Most of the people who have moved to town were looking for a smaller place to settle down than in the big cities of Georgia. The rural homes are very far apart from each other, which is also ideal for men and women looking to settle down and begin a family.

Port Wentworth has more than doubled in population from 2010 to 2020. This port city grew 103% in ten years, showing a massive amount of potential for new residents. Port Wentworth in 2010 started with 5,359 people and gained another 5,519 people in ten years, growing to what is now a population of 10,878 residents living in the city.

It’s common for cities on a port to grow rapidly, but this was a more common phenomena decades ago when cargo processes relied more heavily on marine transport. The reason why Port Wentworth has grown so much recently is due to its record-low crime rate and pleasant atmosphere. Port Wentworth residents enjoy beautiful river views as well as the Savannah National Wildlife Refuge, making it ideal for both families and young professionals who enjoy exploring nature on their time off.

Clarkston is known as the “Ellis Island of the South” thanks to its high level of diversity, which has made the city a cultural melting pot not unlike its New York counterpart. With a growth of 95.3% in population between 2010 and 2020, this city is now home to 14,756 residents. In 2010, Clarkston only housed 7,554 people, and since then, 7,202 people have come to live in this thriving city, representing a growth rate of 95.3%.

Clarkston is known as being a welcome home to refugees ever since the Vietnam War. This city is close to Atlanta, which makes the possibility of finding a job close to home a straightforward process. Clarkston also allows easy access to public transportation, which is also ideal for lower-income families working to save for a car. The housing here is affordable, and it is known as the most diverse area of Georgia.

Hoschton, Georgia, sits less than an hour away from Atlanta and, in the 2020 census, boasted a population of 2,666 residents. The population has grown by 93.6% since 2010. In that short time, 1,289 people moved into Hoschton, almost doubling the population of this once small town.

Those who have moved to Hoschton often claim to move there for its “country feel.” With a lower population and highly-rated school district, Hoschton is a consistent choice for families who want their children to have the benefits of more personalized attention in class. Others have said that Hoschton has not only great views of the countryside but also a great community as well.

Williamson has grown almost at the same rate as Hoschton in the past ten years. However, the population of Williamson is quite a bit smaller than Hoschton, which offers residents even more space to themselves. Williamson homes about 681 people according to the 2020 census, which is almost double the 2010 census population of 352. In the time between the two censuses, 329 people have moved to this city.

This is a small town that has stayed a small town. The growth of this city is largely composed of Georgia natives who are like-minded in wanting to live a small-town lifestyle. This is a beautiful city with gorgeous views of the Appalachian mountains, which is ideal for nature lovers. When combined with a lower cost of living and property values than most parts of the state, it’s not a mystery why more people have wanted to move here over the years.

Norcross has grown quite a bit since 2010. Norcross is a city that sits near Berkeley Lake in Georgia, which is renowned by lovers of natural beauty and sporting enthusiasts as well. Between 2010 and 2020, Norcross gained 8,093 new residents, going from a population of 9,116 to a population of 17,209. This represents

Norcross became known as “Atlanta’s Summer Resort” for being an ideal spot to get out of the heat thanks to its neutral climate and easy access to water-based recreational activities. Many people have moved to Norcross permanently over time for the more mild weather. Norcross has plenty of parks and attractions that amuse both its residents and entice visitors to move to this growing area.

Richmond Hill finishes our list of growing cities in Georgia, and even at the lower growth of 79.2%, this city has been quite successful in the last ten years. In 2010, Richmond Hill had a population of 9,281, and since then, 7,352 people have moved there, bringing the population in 2020 to 16,633. This represents a total growth rate of almost 80%.

Richmond Hill is a historical town known for Henry Ford’s Ford Farms, which was a social experiment that occurred along the Ogeechee River. Many people now move to Richmond Hill for a highly rated school system and a low cost of living compared to nearby areas.

One thing that you’ll notice when you take a look at the fastest growing cities in Georgia is that residents seem to be flocking to smaller towns with lower populations. Why is this trend moving in this direction? Some of the biggest reasons why more and more residents are embracing country life include the following.

No matter if you’re planning to move to a less populated area of the Peach State or you’re looking for a big city adventure in Atlanta or Savannah, moving can be a major stressor. Working with one of the best moving companies in Georgia can make your upcoming move easier and less stressful. From packing up your things to disassembling furniture, the best moving companies will help you start the next chapter of your journey with ease.