Kara Griffin
What are the fastest growing cities in Florida? If you guessed Miami or Orlando, you might be surprised to learn that small communities like Freeport, Davenport, and Lake Buena Vista take the top three spots. In this article, we'll review population growth in Florida by city. Discover the hottest trending areas of Florida’s real estate market. 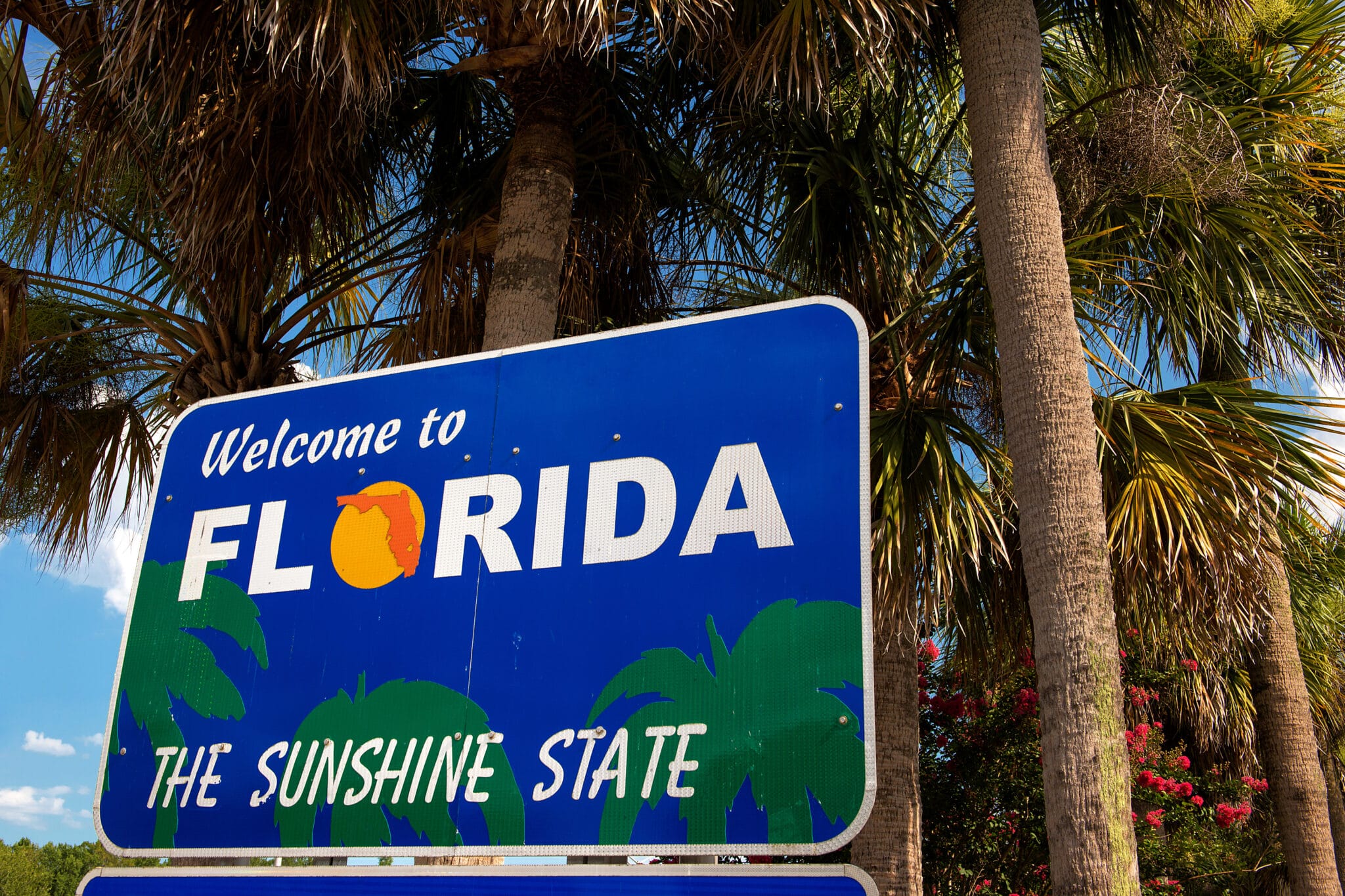 From the hot beaches of Miami to the gardens of Fort Lauderdale, Florida has a unique climate and landscape that attracts homeowners from across the country. As more and more residents move to the Sunshine State, you might be asking yourself—which cities in Florida are showing the fastest growth? The answers might surprise you! Read on to learn a little more about Florida’s fastest growing cities and why they’re attracting new residents. 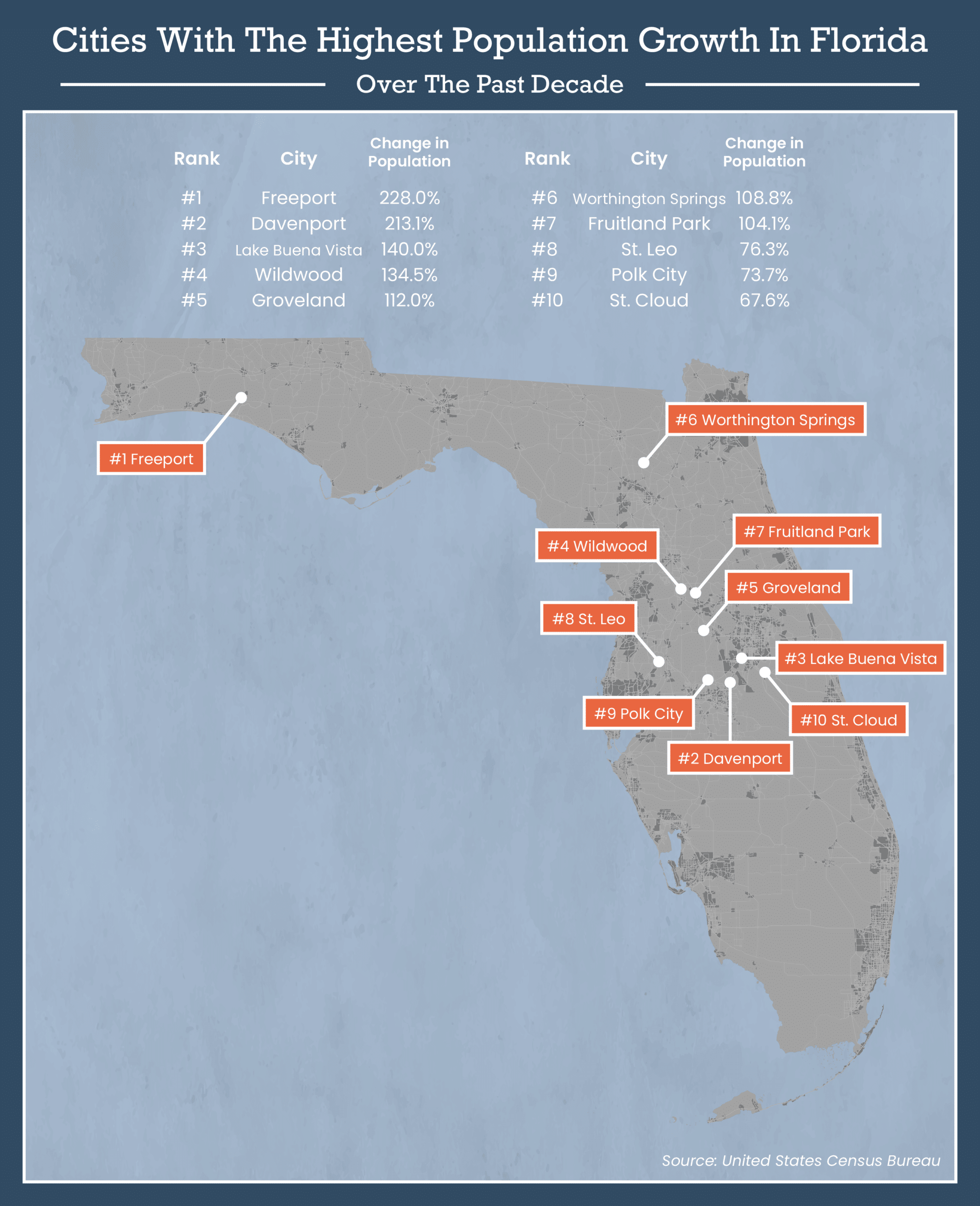 The fastest growing city in the Sunshine State isn’t the capital or one of the many vacation destinations spread across Florida — it’s Freeport, Florida, a small town located in the north-east corner of the state. From 2010 to 2020, Freeport’s population grew from 1,787 to 5,861. This represents a staggering growth of 228%.

Freeport is growing thanks to its rural-suburban location combined with its easy access to major highways and local community centers. Freeport is located between Panama City and Fort Walton Beach, and just a 20-minute drive will bring you to Destin. Moreover, property in Freeport is significantly more affordable than other parts of Florida—about three out of every 4 Freeport residents own their home.

The second fastest growing city in Florida is Polk County’s rural-suburban area of Davenport. Between 2010 and 2020, Davenport’s population grew from 2,888 to 9,043, representing a total population growth rate of 213.1%.

Conveniently located in central Florida, Davenport is expanding thanks to its low cost of living. The average cost of a home in Davenport is $175,000, which is more than $200,000 lower than the Florida average home cost of $382,000. This affordable way of life is attracting more commuters from the Orlando area, which is located about 34 miles to the north.

The third fastest growing city in Florida is Lake Buena Vista. Located in the heart of Florida, this small town saw a population growth of 10 to 24 residents between the years of 2010 and 2020. This represents a 140% growth in local population.

Lake Buena Vista is best known throughout the United States as the mailing address of Walt Disney World. Despite the fact that most of the mouse’s attractions are located outside of Lake Buena Vista, the area has become popular with wealthy families looking for easy access to community-oriented attractions and events while also avoiding the tourist impact and higher crime rates associated with inner Orlando.

Not to be confused with the beach town in New Jersey bearing the same name, Wildwood is a small city area located close to The Villages in central Florida. From 2010 to 2020, Wildwood’s population grew from 6,709 to 15,730. This represents a population growth rate of 134.5% in the last decade.

A suburban area of Orlando, Wildwood is quickly becoming a popular destination for retirees to enjoy their golden years. A more affordable alternative to the nearby Villages community, Wildwood enjoys a low crime rate combined with easy access to Florida’s major cities of Orlando and Tampa. This makes Wildwood increasingly popular with both working professionals and older men and women.

Nestled between some of Florida’s most famous lakes is Groveland, the city with the 5th highest population growth in the Sunshine State. Between 2010 and 2020, Groveland’s population expanded from 8,729 to 18,505, representing a total population growth of 112%.

One of Florida’s best-kept secrets, Groveland is a city where outdoor adventurers thrive. The area has become increasingly popular with weekend warriors and those who want to have quick highway access to Orlando while also maintaining a slower way of life. In their free time, Groveland’s residents enjoy canoeing, swimming, and sailing at Cherry Lake, Lake Lucy, and dozens of smaller bodies of water year-round.

Another one of Florida’s hidden gems for nature lovers, Worthington Springs has a total area of a little less than half of a mile. However, the secluded area also offers the best that Florida’s unique climate has to offer, including the Chastain-Seay Park, the Santa Fe preservation area, and the New River. About 40% of households in Worthington Springs have children under the age of 18, meaning that this secluded area is growing particularly strongly among families.

Fruitland Park can likely attribute most of its growth to its location. The city is situated close to both Orlando and multiple popular destinations for resort goers. The unemployment rate of Fruitland Park is 5.3% (lower than the US average of 6%) indicating that the town’s boom in population may be associated with resort and entertainment workers looking for quick access to the nightlife neighboring towns have to offer while also enjoying a more affordable way of life. About 75% of Fruitland Park residents own their living space, which is significantly lower than Orlando’s 35% ownership rate.

Coming in at spot number eight in Florida population growth is the college town of St. Leo. Between the years of 2010 and 2020, the city saw its population increase from 1,340 to 2,362. This growth represents an overall change of about 76.3%.

Best known as the home of St. Leo University, the town of St. Leo is largely rural and enjoys a mostly quiet atmosphere. Residents of St. Leo are active golfers, enjoying access to two unique golfing courses and driving range. St. Leo is also an ideal location for those who enjoy aquatic activities, as access to Lake Jovita is just a short drive away. About 90% of residents in St. Leo own their living space, attesting to the particularly low cost of living in this area.

Located in the Lakeland-Winter Haven metro area, Polk City has seen an influx of residents from surrounding urban centers. Between the years of 2010 and 2020, Polk City saw its population grow from 1,562 to 2,713. This represents a total growth of 73.7% in the last decade alone.

Nestled between multiple protected areas, the natural beauty of Polk County is enough to draw residents on its own. A traditionally agricultural area, new job growth has attracted residents from surrounding city areas—especially those looking for an affordable place to live. The average price of a home in Polk City is $107,700, more than three times more affordable than the median home price in Florida. With an attractive setting and a wealth of leisure activities easily available, Polk City encapsulates all the benefits of rural life.

Not every city on Florida’s list of fastest-growing communities is a small, rural town. The final city on our list of hot real estate areas in the Sunshine State is St. Cloud. Between the years of 2010 and 2020, the city saw a population increase of 23,781 residents, expanding the total population from 35,183 to 58,964. This represents a growth rate of 67.6%.

A medium sized city, St. Cloud is located south of Orlando, which makes commuting exceptionally easy. St. Cloud has become popular with working professionals who must frequently travel to Orlando but who want to steer clear of the negative impacts that a heavy tourist interest has on the area. With a wealth of unique dining and nightlife options combined with three lakes within driving distance, St. Cloud is equally as enjoyable for outdoor adventurers as it is for foodies and partygoers.

Here are the top 200 cities by Florida population growth in 2021:

A longtime destination for tourists and beachgoers, Florida has seen expansion throughout the state. However, some of the most popular cities are seeing decreases in population growth as residents make their way to unexplored areas of the state. Between the years of 2010 and 2020, urban centers like Panama City, Miami Beach, and Belle Glade have all seen negative population growth of at least 4%.

What’s causing this exodus from larger areas—and what is attracting new residents to Florida overall? Some of the contributing factors that are influencing real estate trends in Florida include:

No matter if you’re moving just a few towns over or from Seattle to Miami, a move can be stressful on both you and your family. Working with one of the best moving companies in Florida can make the experience easier and keep you sane. From handling packing to arranging storage services, a professional moving company can help you enjoy a streamlined move—no matter where you’re headed.