Kara Griffin
Vernon, Lathrop, and Dublin are the top three fastest growing cities in California. But which other cities are seeing the most growth potential in the Golden State? You might be surprised to learn that major cities like Los Angeles and Malibu don’t make the list. Let’s take a look at how populations are changing in California—and which spots will be hotter in the coming years. 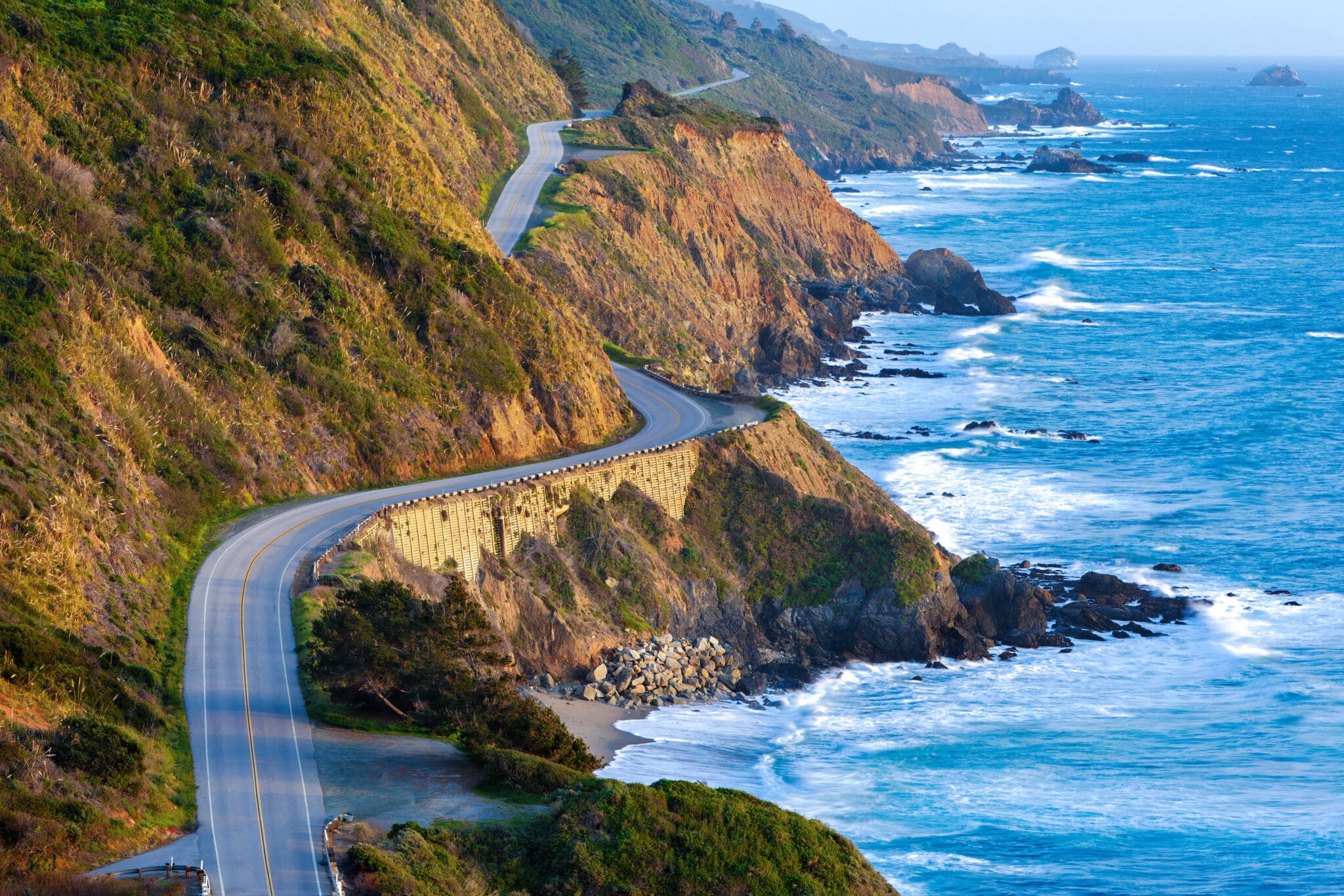 With some of the most famous beaches in the world, a richly diverse environment, and a bustling entertainment and technology-based economy, California offers tons of benefits to its residents. However, residents of the Golden State have been progressively moving out of some of the most famous cities in the state for quieter pastures. Let’s take a look at a few of the fastest growing cities in California in 2022. 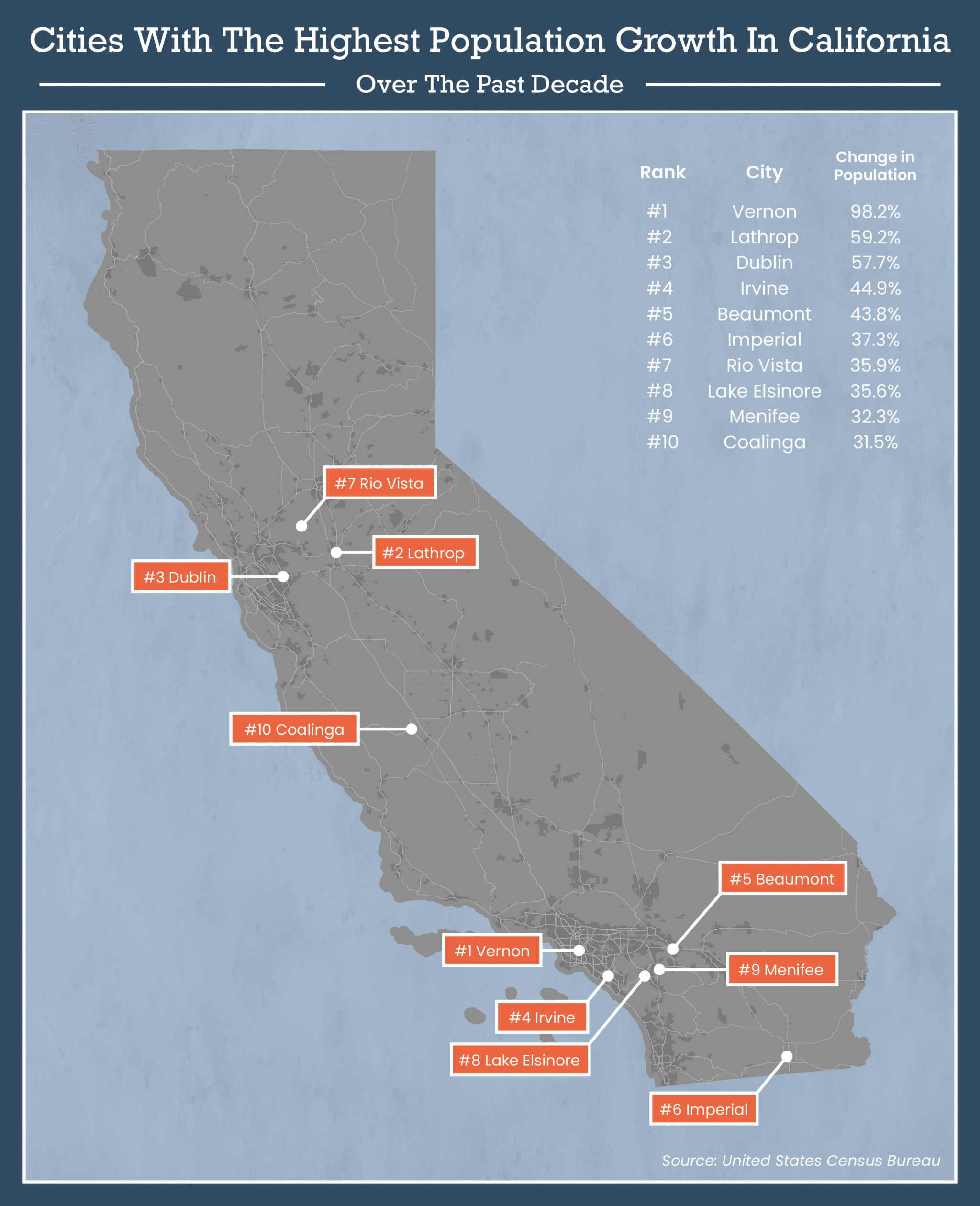 When most people think about moving to California, they imagine traveling to the city of Los Angeles or migrating to the beaches of Malibu. This means that you might be surprised to learn that the city with the highest increase in growth from 2010 to 2020 was the small industrial city of Vernon. Between 2010 and 2020, Vernon saw an increase in population from 112 to 222, meaning that the population almost doubled.

Touting itself as “exclusively industrial,” more and more men and women who work in Vernon are moving out of Los Angeles (which is located to the north) to enjoy a shorter commute and more space. Though the small city is still currently dominated by warehouses and packing plants, residential areas are becoming increasingly more common.

The city with the 2nd highest population growth in California isn’t 1 that you might expect—instead of major hubs like Palm Springs or San Francisco, the small, quaint town of Lathrop takes the top spot. Between 2010 and 2020, the population of Lathrop grew from 18,023 to 28,701 for a growth percentage of 59.2%

It’s easy to see why families, in particular, are making an exodus to Lathrop from California’s major metropolitan areas. Combining easy access to the Bay area by car with a more affordable standard of living and a slower way of life, Lathrop might be an excellent place to call home if you’re looking to enjoy more peace and quiet but don’t want to be totally disconnected from the city.

A suburb of the Oakland area, most residents of California know Dublin for its rich and vibrant art scene. However, the city is also experiencing a surge of new economic activity bleeding over from the San Francisco area. This has resulted in the population of Dublin growing from 46,036 in 2010 to 72,589 in 2020, representing a growth rate of 57.7%.

Raising a child in San Francisco can be tough—and expensive. Many residents who originally lived in San Francisco have moved to Dublin to enjoy a lower cost of living and enhanced educational opportunities. Dublin’s schooling options are some of the highest-rated of California’s major cities, with A-rated public and private schooling choices. Dublin also features easy access to kid-friendly amenities like arcades and parks.

In the past year, a number of tech giants have moved their headquarters to Irvine and brought along with them a boom of economic growth. Some of the largest technology employers stationed in Irvine include Blizzard Entertainment, Edward Lifesciences, and Broadcom. But the residents of Irvine don’t live an “all work no play” lifestyle. On the weekends, residents of Irvine enjoy access to a wealth of libraries and can enjoy the mild climate in 1 of the city’s 60 parks.

Beaumont, a suburb of Riverside, CA, takes 5th place on our list of the fastest-growing cities in California. The population of Beaumont increased from 36,877 in 2010 to 53,036, representing a 43.8% increase in population. This growth is largely attributed to Beaumont’s increasingly independent economy, which has become significantly more diverse in the previous decade.

Beaumont can be an excellent place to live if you value desert recreation and reasonable climates. Unlike some other cities in the Mojave Desert area (like Joshua Tree or Palm Springs) Beaumont enjoys a relatively mild climate year-round. Beaumont is particularly popular with climbing and hiking enthusiasts, who enjoy the city’s easy access to desert attractions and a variety of national parks.

A haven for modern-day pioneers, Imperial offers the best that the Golden State has to offer in terms of outdoor adventuring. The city is close to the Salton Sea, which offers sports like kayaking, swimming, and waterskiing. Those who prefer their events a bit drier can head to Joshua Tree National Park. Joshua Tree is situated to the north of Imperial and offers a wide range of hiking and camping opportunities, with hikes designated for beginners and experienced hikers alike.

Nestled in the Sacramento River Delta region of Northern California, most residents of the Golden State know Rio Vista as a quiet, rural town. However, the economy of Rio Vista has been consistently growing in the last decade—and the city’s reputation as a sparsely populated area may be a thing of the past in the coming years. Between 2010 and 2020, the population of Rio Vista increased from 7,360 to 10,005, representing an overall growth rate of 35.9%.

Rio Vista’s growing economy isn’t the only thing attracting new residents to the area. The city is currently well-known for its diverse population, which brings with it a selection of cultural attractions, museums, and entertainment choices. From visiting the Rio Vista Golf Club to whale watching in the Sacramento River, there’s plenty to explore in this small city.

Lake Elsinore is a city nestled just west of Riverside County—and the 8th most popular city in California for those looking to move into a new environment. Between 2010 and 2020, Lake Elsinore increased from 51,821 to 70,265, representing an increase in population of about 35.6%.

A truly eclectic city, Lake Elsinore offers something for everyone when it comes to weekend fun. Sports fanatics can cheer on the Lake Elsinore Storm at the massive Storm Stadium while sun-worshippers catch some rays at Elm Grove Beach. As is the case with many areas of California, the city also offers a variety of nature trails and hiking options for nature lovers. With so many options, Lake Elsinore is attracting a diverse group of new residents to its city.

Residents of California will find the hidden gem of Menifee in Riverside County—but this beautiful city might not stay hidden for long. Between 2010 and 2020, the population of Menifee increased from 77,519 to 102,527, representing a growth rate of 32.3%.

Located in the heart of Southern California, Menifee is known for its bright blue skies, classic summer fun, and its host of family-friendly amenities. The most popular attraction in the area is the Drop Zone Water Park, a sprawling amusement park that offers everything from quiet camping to high-speed waterslides. In addition to this attraction, Menifee is also an excellent area for family life, with a number of well-maintained dog parks and relatively affordable housing prices.

Coalinga was devastated by the 1983 earthquake, which measured a moment magnitude of 6.5. More than 300 homes were destroyed, and 691 buildings were severely damaged. Though it took years, the community of Coalinga is showing its resilient attitude and currently maintains a thriving economy based around agriculture and energy, including both traditional and renewable energy.

As you can see, the majority of cities that are seeing population growth in California have their new residents funneling from the state’s most urban areas. Some cities that saw decreases in population growth between 2010 and 2020 include East Los Angeles, Inglewood, and Huntington Park. But why are residents moving out of these areas? Some of the most common reasons include the following.

No matter your reason for moving or where you’re headed, a residential move can take a major toll on you and your family. If you’re considering moving into or out of California, working with one of the best moving companies in California can make your life easier. With a faster moving process, less damage to your things, and more time to focus on other aspects of your move, it’s easy to see why working with a team of professional movers is an investment worth making.

To find out the fastest growing cities in California by population growth, Pro Mover Reviews collected population data over the last decade (2010-2020) from the U.S. Census and calculated each city’s change in population.