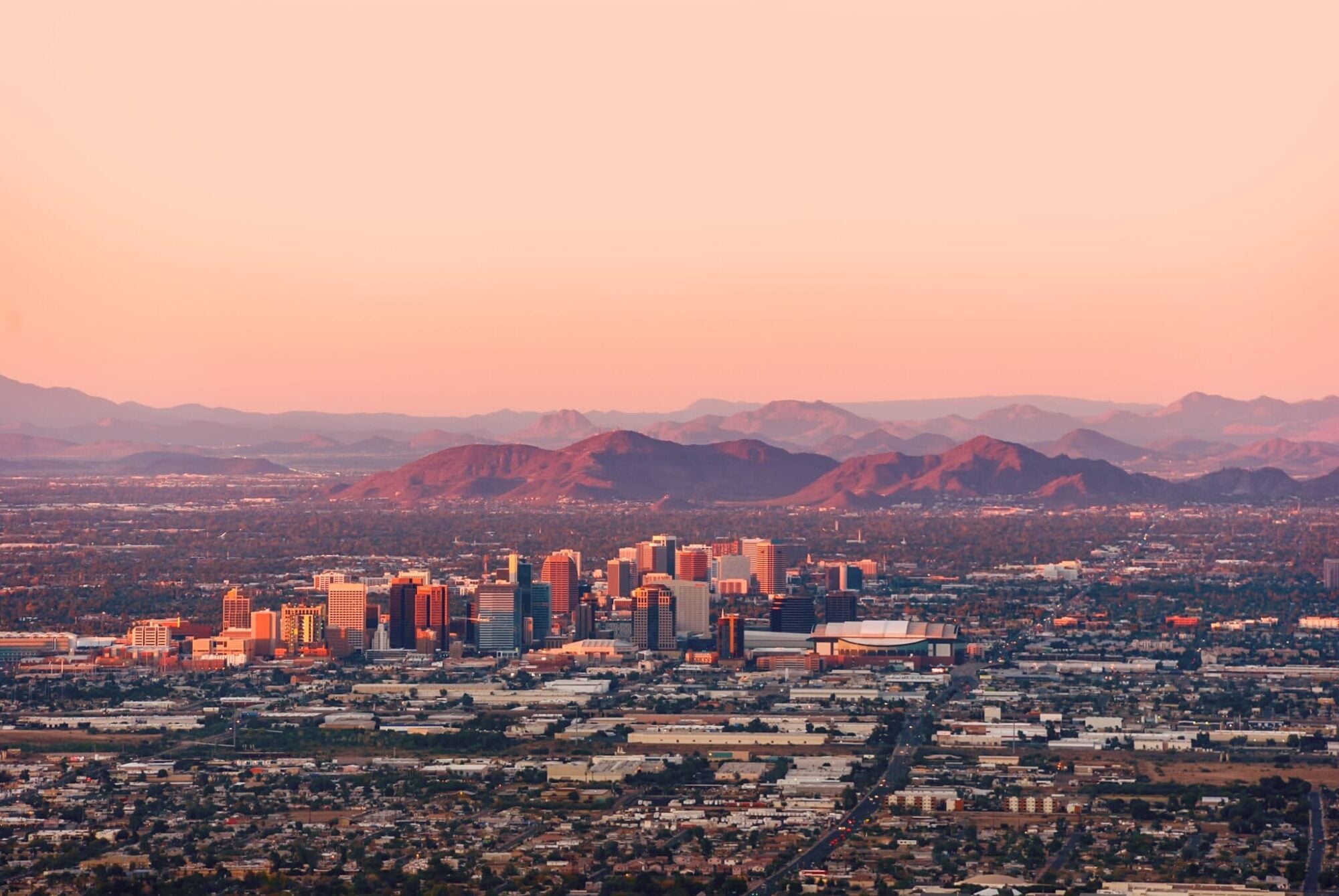 The sixth-largest state in the United States, Arizona is mostly known for its unique climate and weather. From the hot, dry deserts of southern Arizona to thick forests found in the north, the Copper State boasts a diverse climate full of natural beauty. If you live in Arizona, you might be asking yourself—which parts of the state are growing the most? The answers might surprise you! Read on to learn more about the cities in Arizona that are expanding at the fastest pace. 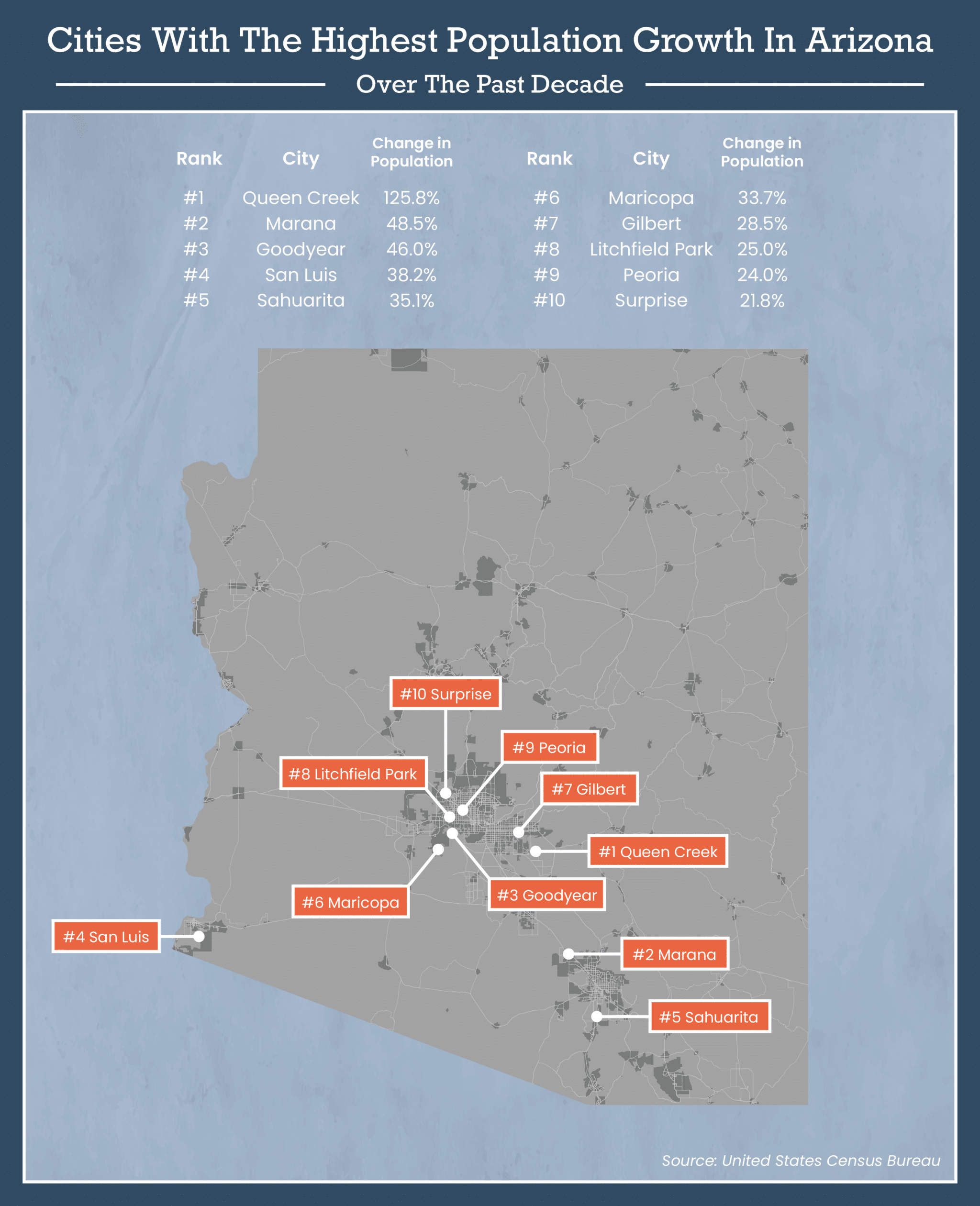 Billing itself as “one of the best-kept secrets in Arizona,” the number one top growing city in the Grand Canyon State might not be a very big secret for long. Between the years 2010 and 2020, the population of Queen Creek grew from 26,361 to 59,519. This represents a 125.8% increase in population in the last decade.

Home to a wealth of cultural events, Queen Creek has long been one of the cornerstones of Arizona’s heritage festivals. The annual American Heritage Festival is the largest educational festival in both Arizona and the American Southwest. Even when this annual event isn’t taking place, residents can enjoy a multitude of public amenities, including a publicly-owned equestrian event center.

The second fastest-growing city in Arizona is the former home to the Breakers Water Park, Marana. Between the years 2010 and 2020, the city of Marana’s population grew from 34,961 to 51,908. This represents a total population growth of 48.5%.

Located just north of Tucson, Marana has become more than just a location for commuters to enjoy more affordable property—it’s also quickly become a destination for tourists as well. Nestled between the Saguaro National Park and Mt. Lemmon, Marana is an oasis for nature lovers. The Ritz-Carlton has even opened a high-class resort in Marana—a testament to the town’s growing property values.

Located in Maricopa County, the third fastest-growing city in Arizona is Goodyear. Coincidentally, Goodyear was also the third fastest-growing city in Arizona between the years of 1990 and 2000 as well, showing a history of steady growth. In the past decade, the population of Goodyear has increased by 46%, with more than 30,000 new residents making their home in the city.

A suburban city located adjacent to the metropolitan center of Phoenix, AZ, it’s easy to see why Goodyear has steadily been growing in popularity with commuters who work in the city. Goodyear enjoys pleasant winters and has easy access to a wealth of entertainment options. Home prices in the area have also been rising as the suburban area beyond Phoenix continues to become more urban.

Located close to the border of Mexico in the extreme southwestern corner of Arizona, the fourth largest growing city in San Luis. Between the years 2010 and 2020, the city of San Luis’s population grew from 25,505 to 35,257. This represents a total population growth rate of 38.2% for the decade.

Lovers of the desert climate are flocking to San Luis to enjoy the blistering heat and nearby recreation. With more than 300 days of sunshine a year, San Luis’s climate is ideal for sun worshippers who also want easy access to local amenities. The cost of living in San Luis is also exceptionally low, with the average home being valued at around $180,000.

Located just 15 miles away from Tucson, the fifth largest growing city in Arizona is Sahuarita. Between the years 2010 and 2020, the city grew from a population of about 25,259 men and women to a total of 34,134 residents. This represents a total city growth rate of 35.1% in the last decade.

Found in an area known throughout Arizona as the “sun belt,” Sahuarita can be an ideal place to live for anyone who loves desert culture and living in a warm, attractive climate. The arts and cultural scene of Sahuarita attract thousands of visitors a year, which can make the city an ideal place to live for creative professionals. In addition, the city is also rich in history, dating back as far as 1775, which can make the city a compelling home for history buffs as well.

Originally formed as a resort town, Maricopa is the sixth fastest-growing city in Arizona thanks to its easy access to Phoenix. Between the years 2010 and 2020, the city of Maricopa grew from 43,482 to 58,125. This represents a total population growth rate of about 33.7% within the last decade.

Located between Tucson and Phoenix, Maricopa is becoming increasingly popular with commuters in both areas looking for more affordable housing combined with a wealth of entertainment options. The metropolitan area has easy access to international transport options, which can be a major convenience for globetrotters and anyone who travels frequently for work. In their free time, residents of Maricopa also enjoy access to a wealth of golf clubs, parks, and other entertainment options.

Residents of Arizona who are looking for even easier access to Phoenix may want to consider the seventh fastest-growing city in the Copper State, Gilbert. Between the years 2010 and 2020, Gilbert’s population has increased from 208,453 to 267,918. This represents a total population growth rate of 28.5% in the past decade.

Consistently ranked as an ideal place to live for both families and young couples, Gilbert combines affordable, quick access to Arizona’s largest cities with all of the amenities you could need. Home to a number of critically acclaimed restaurants as well as a variety of nature preserves, the city is equally as accommodating for foodies as it is for nature lovers. Rising property values are a testament to Gilbert’s rapidly expanding popularity.

Litchfield Park can be an ideal place to live if you love the outdoors and the warm desert air. Providing residents with a range of access to entertainment options, Litchfield Park is particularly popular with those who love golfing. The city is home to the Wigwam Golf Club, a sprawling green offering exceptional amenities. In addition to golfing, Litchfield Park also offers a variety of public parks ideal for family life.

The ninth fastest growing city in Arizona is Peoria, located to the northwest of inner-city Phoenix. Between the years 2010 and 2020, the population of Peoria expanded from 154,065 to 190,985. This represents a total population growth of 24% within the last decade.

Sunny and bright with lower-than-average humidity for Arizona, Peoria provides residents with quick access to Phoenix as well as a range of outdoor activities and amenities. From tennis courts to hiking trails, the area is full of opportunities to enjoy the mild climate. Residents of Peoria who want to get away can also take advantage of affordable airfare options, flying roundtrip for about $100 for a vacation to California.

A small city ideal for family-friendly activities, Surprise boasts an array of public schooling options and amenities appropriate for children. From access to a wealth of well-maintained community spaces to boating and swimming in the Agua Fria river, it’s easy to see why more and more families looking for a more active lifestyle are moving to Surprise. The city’s crime rate has also been steadily dropping in recent years when compared to Phoenix as a whole, making the city an even safer choice for families.

A large percentage of the cities that are seeing growth in Arizona are located near or with easy access to Phoenix or Tucson. However, you may be surprised to learn that the increase in population in these areas is largely coming from out-of-state. Residents of New York and California in particular are flocking to Arizona to enjoy the following benefits.

No matter if you’re moving from California or you’re heading from Phoenix to Tucson, a move can be a stressful experience. Working with one of the best moving companies in Arizona can make your move a little easier. From providing you with packing services to arranging storage solutions, the right moving company will help your family begin your Arizona adventure with less stress.

To find the fastest growing cities in Arizona, Pro Mover Reviews collected population data over the last decade (2010-2020) from the U.S. Census and calculated each city’s change in population.