Home > Moving Resources > Cities With the Best and Worst Rated Handymen, According to Yelp

Kara Griffin
Which cities are home to the best and worst handymen? We looked at Yelp star reviews in the 100 largest metropolitan statistical areas across the U.S. to find out.

With the New Year quickly approaching, many homeowners are looking forward to finally getting around to finishing some of those home maintenance tasks on the to-do list.

But finding time and energy to get everything finished can be daunting, especially if you have a family, a job, or other pressing responsibilities. In these cases, hiring a handyman could prove to be an ideal solution. Not only will a handyman allow you to outsource all of those lingering tasks that you just can’t seem to cross off your list, but it’ll also allow you to ensure that your tasks are finished to a high standard as well.

Finding a good handyman, though, is no easy task. To help make the job a bit easier, we’ve rounded up the data from across the country to see which cities have the highest star ratings for handymen. We’ve used Yelp to look at the data, highlighting which places have the best star rating and which ones have the lowest out of 5 possible stars. Take a look and see where your city falls. 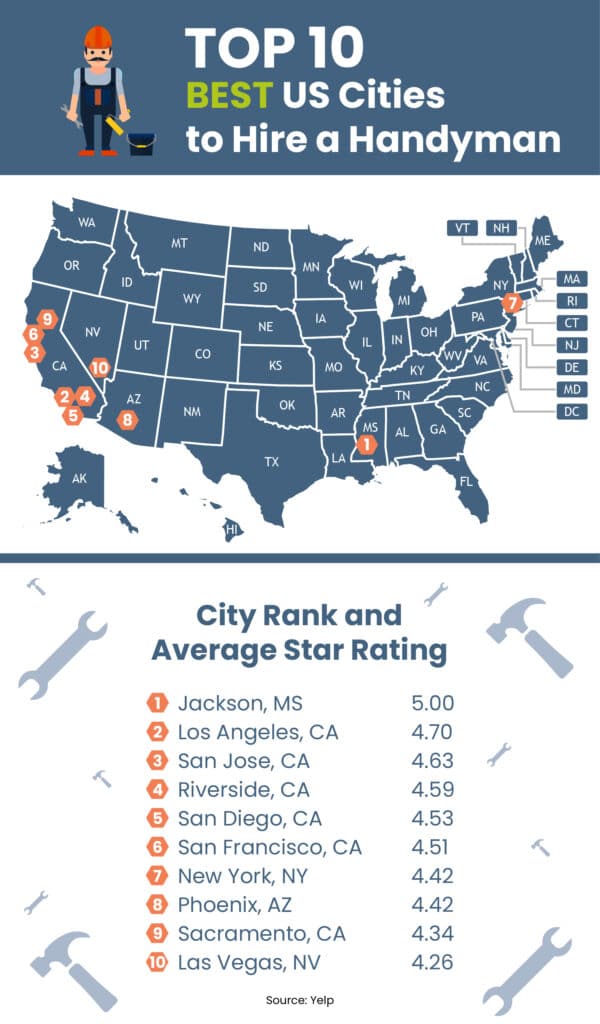 Coming in at number one for the highest average star rating for handyman services, is Jackson, Mississippi –the capital of the state. Handymen here have a solid 5-star average rating. With contractors this highly reviewed, homeowners in Jackson should have no trouble finding a reputable professional to complete their tasks.

Louisiana may have scored the highest, but the second, third, fourth, fifth, and sixth place are all located in sunny California. In second place is Los Angeles, with an average 4.70 rating. In third is San Jose (4.63). Fourth place goes to the Riverside (4.59). In fifth is San Diego (4.53) while San Francisco (4.51) comes in sixth. 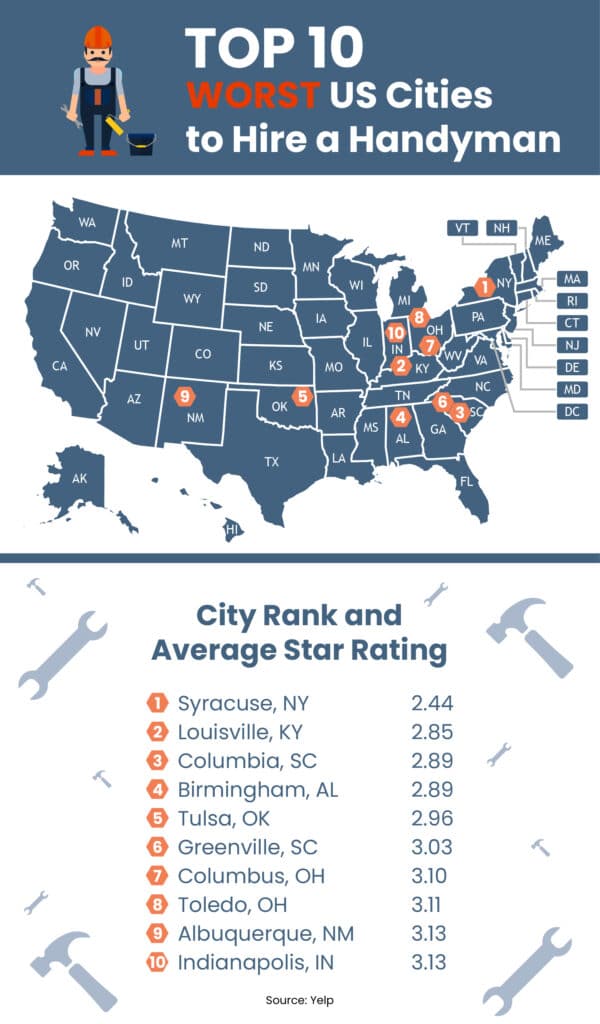 Now, a look at the cities with the worst handyman service star ratings. If you’re in the market for a handyman and happen to live in these places, you’ll want to carefully check their reviews. These cities all scored between 3.13 and 2.44, falling far below average.

Coming in near the bottom of the top-100 cities are the following locations:

Reviews from these places revealed that there are complaints about handymen promising to provide quotes but then not showing up to complete the work. Poor craftsmanship, abandoning the work halfway through the project, and failing to clean up the job site are other issues. Poor communication and a lack of professionalism are other commonly cited problems.

Now, here’s a look at all of the cities we analyzed and their respective star rating.

As a general rule, a business on Yelp needs 4.5 stars just to be considered above average. With this in mind, it’s worth mentioning that, by and large, most of the top-100 cities that we analyzed had average handyman rankings of below 4.5, putting most of them decidedly below average. In fact, only the first six cities on our list, or 6%, scored a 4.5 or higher rating. Meanwhile, the average star rating out of the 100 cities overall was 3.66.

Although it’s difficult to tell if most handymen in these places have received bad reviews or if there’s just a select few that are bringing the ratings down, it never hurts to play it safe. As always, homeowners should check the reviews on the handyman that they’re thinking of hiring, before bringing them on board. It’s also important to note that in most cases, contractors with no reviews, or just one review, should also be avoided, just in case.

We scraped Yelp for the 100 largest metropolitan statistical areas (MSAs) in the United States to determine the best and worst rated cities for handymen. For each city, we averaged the star ratings for companies listed under the handyman services category. Yelp star ratings are on a scale from 1-5, with 5 being the best possible rating.

Have a question or comment regarding this article? Email Kara Griffin at kara@promoverreviews.co